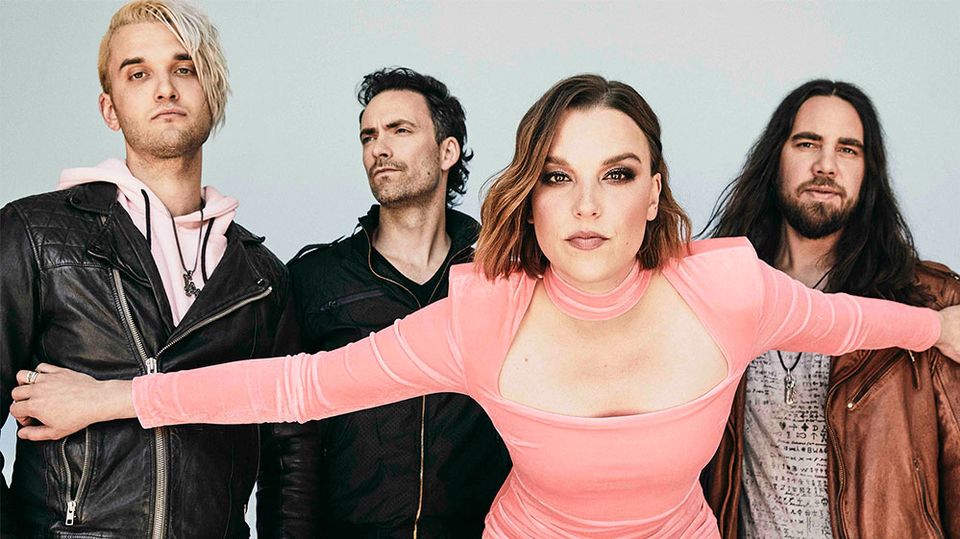 4th February 2022 0 By John Deaux
Grammy-winning hard rock band Halestorm today announced Back From The Dead, their fifth studio album due out May 6, 2022, and follow-up to 2018’s Vicious. Back From The Dead is available in multiple formats for fans to pre-save and pre-order now here.
Produced by Nick Raskulinecz (Foo Fighters, Mastodon, Alice in Chains) with co-production by Scott Stevens (Shinedown, Daughtry, New Years Day), Back From The Dead quickly evolved from songwriting exercises into a matter of survival for the band. Lead singer Lzzy Hale says, “We started writing this album about three months B.C. (Before COVID). Once we went into lockdown and were unable to perform and tour, I fell into a dark place and something of an identity crisis. This album is the story of me carving myself out of that abyss. It is a journey of navigating mental health, debauchery, survival, redemption, rediscovery, and still maintaining faith in humanity.”
Today Halestorm also revealed “The Steeple,” the second single from Back From The Dead. “The Steeple” follows the album’s title track, “Back From The Dead,” released last autumn. That track marked Halestorm’s sixth #1 at US rock radio, and met rave reviews: Rolling Stone called it “a biting, cathartic howler about overcoming obstacles — even death,” and Consequence praised frontwoman Lzzy Hale’s “powerhouse pipes” and lead guitarist Joe Hottinger’s “blistering solo.” Revolver declared it a “raucous, hard-rock rager about staying strong in the face of crushing adversity.”

“Back From The Dead” Track Listing:
Fresh from a US tour with Evanescence, next on the agenda is the band’s long-anticipated “An Evening With…” UK shows, kicking off on 27th February in Manchester and concluding 13th March in London. The band’s patiently awaited return to the stage here will be an intimate and special experience, both for fans and themselves.
When first revealed, powerhouse frontwoman Lzzy Hale enthused, “We are so excited to announce our upcoming Evening-With tour of the UK! That’s right, All Halestorm, all the time! A collection of up close and personal shows where we will be performing deep cuts, all the fan favourites, and even some brand new songs! Come join us!”
Don’t miss the following dates:
Sun 27th Feb – UK – Manchester, Albert Hall (SOLD OUT)
Mon 28th Feb – UK – Southampton, Guildhall (SOLD OUT)
Wed 2nd Mar – UK – Birmingham, O2 Academy (ticketslast few remaining)
Fri 4th Mar – Ireland – Dublin, Olympia (tickets)
Sat 5th Mar – UK – Belfast, Ulster Hall (tickets)
Mon 7th Mar – UK – Glasgow, Barrowlands (SOLD OUT)
Wed 9th Mar – UK – Newcastle, O2 City Hall (tickets)
Thu 10th Mar – UK – Cardiff, Great Hall (SOLD OUT)
Sat 12th Mar – UK – Sheffield, O2 Academy (SOLD OUT)
Sun 13th Mar – UK – London, O2 Shepherds Bush Empire (SOLD OUT)
Halestorm has grown from a childhood dream of siblings Lzzy and Arejay Hale into one of the most celebrated rock bands of the last two decades. Halestorm’s music has now surpassed a billion streams worldwide. Called a “muscular, adventurous, and especially relevant rock record” by Rolling Stone, Vicious earned the band their second Grammy nomination, for Best Hard Rock Performance for the song “Uncomfortable,” the band’s fourth #1 at rock radio, and led Loudwire to name Halestorm “Rock Artist of the Decade” in 2019. Fronted by the incomparable Lzzy Hale – the first female Brand Ambassador for Gibson Guitars – with drummer Arejay Hale, guitarist Joe Hottinger, and bass player Josh Smith, Halestorm has earned a reputation as a powerful live music force, headlining sold-out shows and topping festival bills around the world, and sharing the stage with icons including Heaven & Hell, Alice Cooper, and Joan Jett.
FIND HALESTORM ONLINE
OFFICIAL WEBSITE