Swedish alternative metalcore outfit IMMINENCE have released a video for ‘To The Light’. The track features on their upcoming record, Turn The Light On (Deluxe Edition), which is set for release on 27th November 2020 via Arising Empire.


Stream/purchase ‘To The Light’ here: https://Imminence.lnk.to/tothelight

Check out the following tracks from Turn The Light On: Acoustic Reimagination: 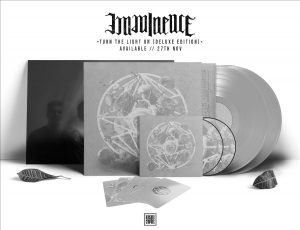 “A dream comes true this winter. For the first time ever, we can proudly present an exclusive acoustic performance, like never seen by us before. Accompanied by a string quartet, grand piano and choir, this seated concert hall tour will take place in five carefully selected cities in February 2021.”

Tickets are on sale here: https://bit.ly/2RgAqIa

Third and highly acclaimed album Turn The Light On embodies the diversity and vastness in IMMINENCE’s heartrending emotion. A significant milestone in the group’s discography, the record is an exceptional composition of sheer force and fragility that fears no boundaries or constraints.

Since the release of their previous album, 2017’s This Is Goodbye, the Swedish alternative metalcore band have strongly established themselves in Europe as one of the most exciting up-and-coming bands today. With the success of their own headline tour and several sold-out shows, they have reached new heights and are ready to truly distinguish their sound on their next album.

Fronted by vocalist and violinist Eddie Berg, guitarist Harald Barrett, drummer Peter Hanström and bass player Christian Höijer, IMMINENCE was formed in the southernmost part of Sweden and have become one of the country’s most promising acts, with their diverse sound embracing everything from metalcore to acoustic. Founded by Berg and Barrett when they were teenagers, the band grew organically with a constantly expanding global fan-base, as well as touring actively through Europe following the release of their 2015 breakthrough single ‘The Sickness’.

With Turn The Light On, IMMINENCE mix their raw, hard-hitting, unrelenting instrumentation with the grandiosity and class of Berg’s unmistakable melodies and violin arrangements. The record demonstrates a remarkable musical diversity, with each song unique in its sound and message.

Turn The Light On was written and produced by Barrett and Berg, with Hanström writing additional drum parts and arrangements. The songs were mainly recorded at Alias Studio in France by Bert and Eric Poncet, who helped to engineer and produce the album. Drums were recorded in Studio Mega, Sweden and produced by Christian Svedin, while additional recordings of choirs and strings were recorded by the band in both Germany and at their home studio in Sweden. The album was mixed and mastered by Henrik Udd (Architects, Bring Me The Horizon, At The Gates, I Killed The Prom Queen), who won Best Producer at the 2017 Heavy Music Awards.