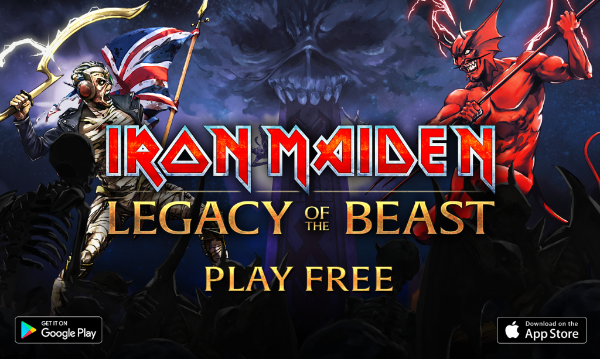 The wait is over! Metal and RPG gaming fans can now download ‘Iron Maiden: Legacy Of The Beast’, the action-packed, free-to-play mobile game where players take on the role of the band’s iconic mascot, Eddie. Available from today for iOS and Android devices, the teams at Nodding Frog, 50cc Games and Roadhouse Interactive have created a new and unique gaming experience in close collaboration with the band and its management team, Phantom Music Management.

The game is set in a visually stunning universe, comprised of an ever expanding series of worlds derived from Iron Maiden’s music and art. Fans of the band and RPG gamers alike will battle and strategize as Eddie and his allies. Inspired by themes from the songs, and set against a powerful and atmospheric Maiden soundtrack, players will journey on epic quests to reclaim the shards of Eddie’s shattered soul as he faces his most challenging adversaries.

James Hursthouse, CEO of Roadhouse Interactive comments, “As a life-long Maiden fan, I am exceptionally proud of Legacy Of The Beast and excited to launch it globally. It has been a privilege to work so closely with Maiden and their management. With this game I believe that we have created an outstanding, authentic RPG experience to appeal to all mobile gamers, including those discovering the band for the first time.”

Steve Harris, Bassist and founder member of Iron Maiden comments, “We’ve always wanted to make a quality Maiden mobile game as we think the combination of Eddie and the music is so well suited – and it’s a great way to get our music out to a new audience! When the opportunity arose to make a mobile game which our fans, along with hopefully a lot of the gaming community, can play pretty well anywhere in the world, and download for free at that, we jumped at it. The whole band visited Roadhouse while touring through Vancouver back in April and we were so impressed by the creativity, enthusiasm and passion of the team there. Visually, the worlds and character designs do us proud and the music just ties it all together.”

Llexi Leon, Interactive Director of Phantom Music Management adds, “Eddie is constantly evolving; he’s a globally recognizable character that resonates with fans of all ages, and has taken on a life of his own beyond the album covers where he first appeared. This game gives players a chance to step into Eddie’s world and experience an odyssey across space and time. In this incredible RPG adventure, we’re able to explore the origins of Eddie’s power and test the limit of his abilities, bringing new mechanics to the mobile RPG genre, and creating a truly unique gaming experience for everyone to enjoy.”

In ‘Iron Maiden: Legacy Of The Beast’, players control Eddie’s destiny across a spectacularly diverse array of worlds by traveling through time in captivating 3D environments. Eddie appears in many forms, each a part of Iron Maiden’s rich history, and each with a set of special powers and abilities.

Players will amass an army of powerful allies to battle alongside Eddie and face the onslaught of foes hell-bent on destroying him. Legions of unrelenting enemies are commanded by the Agents of Control, including The Beast, The Wicker Man, Horus and The Axis General, all drawn from the expansive catalogue of Maiden’s albums and artwork.

The game offers over 40 different Talisman sets to choose from, which all add to characters’ vital abilities. With each battle, players will evolve their armies, take on ever-increasing challenges to reclaim the facets of Eddie’s soul, and ultimately defeat the Agents of Control.

Gameplay is enhanced by a blistering soundtrack that features songs spanning the band’s entire career. Players will hear rare, previously unheard live recordings of Iron Maiden classics adapted for the game under the close scrutiny of bassist and founding member Steve Harris.

The game is now available for free on Apple’s App Store and Google Play.

About Iron Maiden:
With over 90 million album sales, more than 2000 live performances in 62 countries, millions of fans worldwide and 16 studio albums of unerring quality and power to their name, Iron Maiden have more than earned their proudly-held status as one of the most influential and revered bands of all time. In February they took to the road and the skies yet again on The Book Of Souls World Tour, this time on board a Boeing 747 Jumbo Jet piloted by vocalist Bruce Dickinson and carrying the band, their full crew and over 20 tons of stage production and equipment. Iron Maiden’s 2016 tour covers six of the seven continents and 36 countries, performing to well over 1.5 million fans, including first-ever performances in China, El Salvador and Lithuania. The band has recently extended its legacy in a couple of areas of particular interest to them! They now have their own beer, Trooper, widely acknowledged as the most successful international British beer launch of the past twenty years and brewed by family brewers Robinsons in Stockport UK. Secondly Maiden Audio just launched a set of high end on-ear audio headphones, named the ‘Ed-Ph0n3s’, in collaboration with award-winning Japanese electronics company Onkyo Corporation. These are specifically designed as the ultimate headphones to hear Rock and Metal and as such are perfect for use with this game. Their latest album “The Book of Souls” debuted at number 1 in the official charts of over 24 countries and subsequently hit a retail #1 in over 40 countries around the globe.

About Roadhouse Interactive:
Roadhouse Interactive is a Vancouver-based developer and publisher of mobile games. Roadhouse’s management team is responsible for some of the most well-known game franchises of the past twenty-five years and continues to grow industry-leading production, development and live game operations expertise. Titles include a series of hit action sports titles in partnership with Red Bull Media House (Red Bull Air Race: The Game, Bike Unchained), Food Battle: The Game for YouTube sensations SMOSH, and Warhammer 40,000: Carnage, an ARPG set in the expansive Warhammer 40,000 universe. Roadhouse Holdings Ltd., along with 50cc, formed Nodding Frog Limited, a UK company, to bring ‘Iron Maiden: Legacy Of The Beast’ to market.

About 50cc Games:
50cc is a 21st-century gaming collective focused on delivering IP innovation in mobile games. The company was founded in 2014 by Gavin Shackell, Will Moore and Jon Link, who between them have close to a century of senior management experience in the entertainment sector. The team has led projects for global brands including, The Rolling Stones, David Bowie, Coldplay, Iron Maiden, Universal Music Group, Def Jam Enterprises, Live Nation, London 2012 Olympics and the BBC. 50cc recognizes that IP holders from the worlds of music, film, television and sport want to engage with their audiences in new and immersive ways. The company is carving a niche as leaders in the creation and financing of compelling new mobile gaming IP with some of the biggest names in entertainment.