Matt Pearce & The Mutiny are delighted to announce that they will be undertaking their first tour, as special guests of Laurence Jones Band. This tour builds on the highly-successful release of the band’s debut album ‘Gotta Get Home’ and a series of storming festival appearances. What’s more, Matt Pearce & the Mutiny will be releasing their next single (a radio edit of the album’s epic title track) today Friday 26th July, which has been playlisted by Planet Rock.

As Matt himself puts it,  “After some amazing one-off festival shows this year it’s beyond exciting to now be taking The Mutiny out on the road for our first ever tour, as guests of the inimitable Laurence Jones! To take our groovy bluesy sounds to the length and breadth of the UK is something I’ve been wanting to do for a long time, so to go back and play in my hometown of Glasgow is the icing on this very funky cake!

“Unfortunately the changed scheduling means that we won’t be able to appear at Planet Rockstock; however the great folks at Planet Rock have offered to change us over to play at their Winter’s End festival. I’d like to take this opportunity to thank Darren Redick, Jon Norman and the team there for all their help and support with the album and for playlisting both singles released so far.”

Matt Pearce & The Mutiny released their self-produced, smokin’ hot, debut album,‘Gotta Get Home’ on 3rd May through Mutinear Records. Just a day later, it was #1 in the Amazon Best Selling Blues Albums and Hot New Releases charts, and has gone on to glean an impressive array of glowing reviews from the Blues and Rock press.

As you’d expect, given the energy and musical talent invested in the project, Matt Pearce & the Mutiny’s first bold steps into the live arena have been a resounding success, with a string of festival appearances, such as a storming set at HRH Blues in April 2019, preceded by Winterstorm 2018 and The British Blues Invasion in Moscow (Nov 2018)

Check out Matt Pearce & The Mutiny’s website for further updates on the band’s touring and appearances and grab the chance to see a first-class Mutiny, live in progress! 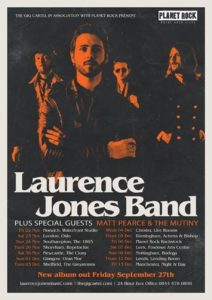