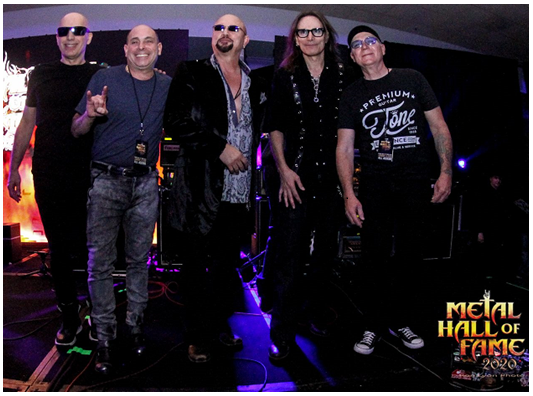 17th August 2020 0 By John Deaux
The Annual Metal Hall of Fame Gala – the most important night in metal – is now available exclusively on Amazon Prime TV and can be streamed on Amazon Fire, ROKU, Apple TV and Comcast Xfinity cable TV via the Amazon Prime Video app by its 150 million subscribers.
“The 2020 Awards Gala was a spectacular event, and the closing all-star jam was phenomenal,” says Pat Gesualdo, founder of the Metal Hall of Fame. “Now everyone can enjoy the 2020 Metal Hall of Fame Awards Gala at home on Amazon Prime.”
The program features an overview with features of the 2020 Metal Hall of Fame including inductions, tributes and jams. Watch heavy metal legends Steve Vai, Joe Satriani, Geoff Tate, Don Dokken, Chris Poland, Stephen Pearcy, Graham Bonnet, Metal Church, legendary music promoter Jack Orbin and Prong as they are inducted into the Hall and amazing performances including Chris Poland, Riot Act (featuring members of Riot), and an epic jam featuring Steve Vai,Geoff Tate, Joe Satriani, Bjorn Englen, Chris Poland, and Pat Gesualdo. Modern Drummer magazine also joined forces with the Metal Hall of Fame to present the only official tribute to late Rush drummer Neil Peart.
Watch the 2020 Metal Hall of Fame Gala:
US: https://www.amazon.com/dp/B08FT3JLRG
UK: https://www.amazon.co.uk/dp/B08FT36Z9Y
“The 2020 Metal Hall of Fame is wonderful,” says Graham Bonnet, who acknowledged Ritchie Blackmore for getting inducted into the Hall, as the vocalist of Rainbow.
About the Metal Hall of Fame:
The Metal Hall of Fame holds the Annual Metal Hall of Fame Charity Gala. It is dedicated to forever enshrining the iconic musicians and music industry executives responsible for making hard rock and heavy metal music what it is today. Their contribution to the genre is invaluable, and they continue to inspire fans throughout the world from generation to generation. It is part of the 501 (C) (3) non-profit organization D.A.D. (Drums and Disabilities), which provides free therapy services for disabled children and their families in hospitals and community centers throughout the United States.
To include your Metal Hall of Fame vote, or for more information, please visit www.metalhalloffame.org.