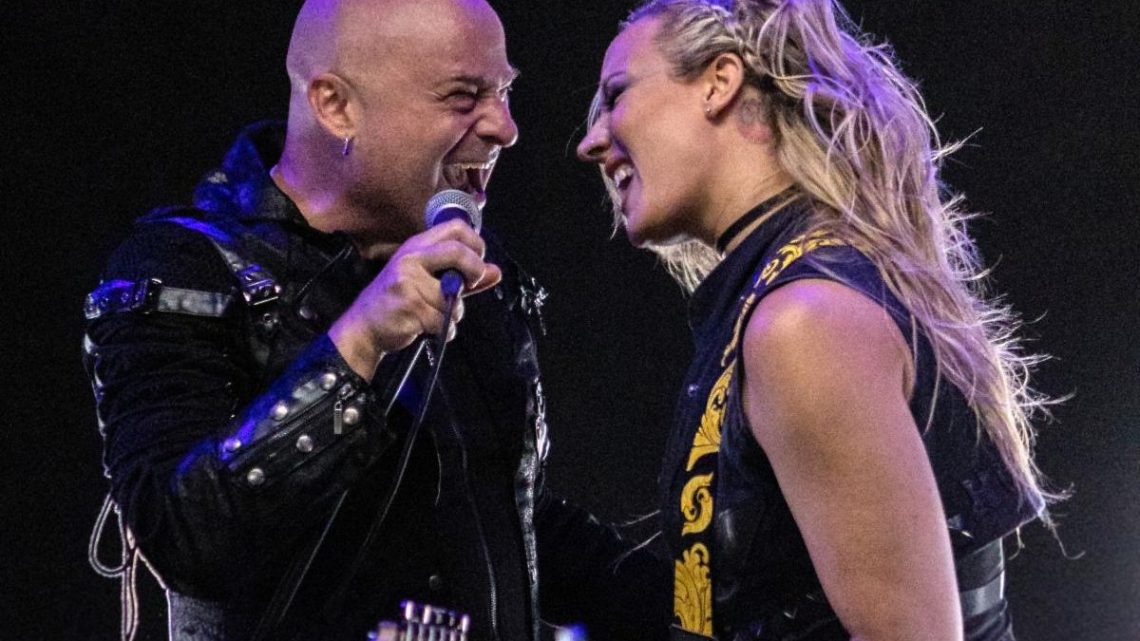 15th October 2021 0 By John Deaux
Superstar guitarist and unstoppable force of nature, “Hurricane” NITA STRAUSS, has unleashed her brand new single, “Dead Inside” today, her first new music since the release of her critically acclaimed debut solo album ‘Controlled Chaos’ in 2018. But this time, NITA isn’t coming alone. “Dead Inside” features her first ever solo collaboration with a vocalist and not just any vocalist, none other than DAVID DRAIMAN, frontman of Grammy nominated rock icons, DISTURBED. Stream “Dead Inside” here
“Dead Inside” is the kind of rare musical alchemy that can only be conjured by the serendipitous collaboration of two iconic hard rock powerhouses such as NITA STRAUSS and DAVID DRAIMAN. Itkicks off with NITA’s inimitably intricate lead guitar work that as the intro builds, it begins to snake its way around the ground-shaking, head-banging lead riff as JOSH VILLALTA’s technical and bombastic drums kick in. Then comes the unmistakable vocal prowess of DAVID DRAIMAN as he delivers his unique signature brand of enormously catchy vocal melody and a stadium-conquering chorus. The song ebbs and flows through sonic and emotional dynamics and culminates with a brutally heavy beatdown into a final rendition of the chorus, ensuring that the lead hook will be replaying over and over in the listener’s head for days.
Speaking on their history making collaboration, NITA STRAUSS shares, “This is my first time releasing my own music with a vocalist, and I am so honoured to take this step alongside a legend like David Draiman. David’s voice and powerful lyrics took this song to a level I could never have imagined! And we are so excited to unleash this song on the world.”
DAVID DRAIMAN adds, “Serendipity can be really cool. We’ve been friends for years. Nita sent me the track… I didn’t have time to work on it right away…then in literally a couple of days, while killing time in Santa Monica, the whole thing just came together. Incredibly proud of how it turned out and honoured to be a part of it.”
NITA has been hard at work on her second solo studio album. More news to come on that soon.
NITA also recently announced that she will hit the road at the end of the year for her Winter Wasteland 2021 headline tour. The US trek kicks off in New Orleans, LA on November 10th and hits a further 28 cities across North America. VIP packages are available here. NITA returns to the UK in May 2022 with Alice Cooper for arena dates with The Cult. Tickets for all dates are on sale now.

Photo: Johnny Young
ABOUT NITA STRAUSS
Through obsession, dedication and sheer hard work, NITA has not only been firmly established as one of the best guitarists in the world, she is also a role model, a trail blazer, a fitness fanatic, a phenomenal performer and a total badass. Her skill, exuberant stage presence and love for all things guitar have seen NITA become a truly unstoppable, limitless force, blazing a previously untrodden trail.
As well as writing, producing and playing all the guitar and bass parts on her solo output, NITA is known for wowing fans all over the world as Alice Cooper’s touring guitarist, gracing the covers of Guitar World and Guitar Player, performing for millions upon millions of WWE fans worldwide at record-setting pay-per-views and becoming the first female to have a signature Ibanez guitar (which now hangs in the entrance to the legendary Guitar Centre on Sunset Blvd).
When the pandemic hit, being the force of nature that she is, NITA took the adversity of no touring and being at home and turned it in to a positive. During the past 18 months, NITA launched her online guitar learning course, Rock Guitar Fundamentals which takes the learner through everything from picking up the guitar for the first time all the way through to learning songs and playing solos. Taking her passion for health and fitness to the next level, NITA also launched her Body Shred Fitness Challenge, a 3 month fitness challenge that pairs a love of music with passion for getting healthier in your body and mind! Participants have the chance to win prize packages valued at over $2,500 while becoming a part of a fun, supportive world wide fitness community. And, as if that wasn’t enough, NITA launched her Patreon which gives fans access to weekly livestreams, lessons, signed photos and behind the scenes looks at the album recording process.
On top of these digital initiatives, NITA also became the official in-house guitarist of the L.A. Rams, playing every home game at the brand new SoFi Stadium, performed the national anthem at WWE’s NXT Takeover: Stand and Deliver event, released two new signature Ibanez guitars, JIVA Jr and JIVA X, was featured on the cover of Guitar World’s: Guitarists Of The Decade issue and performed with Alice Cooper at the Fire Fight Australiabenefit for the bush fires that ravaged Australia in 2020.
NITA released her debut solo album ‘Controlled Chaos’ in 2018 to mass acclaim from fans and media alike with Metal Injection calling it “a great debut that—as its creator intended—leaves no doubt.” and Guitar World stating “‘Controlled Chaos’ is a panoramic view of Nita Strauss’ many strengths”. To date the album has clocked up 6.7 million streams worldwide, with music videos for singles “Our Most Desperate Hour“, “Pandemonium“, “Alegria” and “Mariana Trench” clocking up over 3 million YouTube views.
As well as performing with Alice Cooper, NITA has also played with R&B star Jermaine Jackson, early MTV darlings Femme Fatale, video game supergroup Critical Hit and popular tribute band The Iron Maidens.