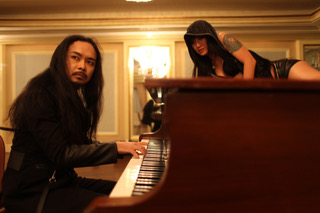 Peaceville Records is proud to announce the signing of Japanese legends Sigh to the roster for their forthcoming album, set for release this year.

As veterans of the black metal scene after more than 30 years of existence and eleven full-length studio albums, as well as being among the most eclectic metal bands with their effortless flirting between numerous musical genre influences over the years, it is a great pleasure to welcome Sigh to Peaceville for their next opus.

Sigh founder and main-man, Mirai Kawashima, shares a few words on the new signing: “I’ve been following Peaceville’s history from the very beginning. I mean the albums by bands like Deviated Instinct, Electro Hippies, Doom, Axegrinder, Autopsy, Paradise Lost etc. were my go-to music in my youth. (and they still are!) When I visited London a few years ago, I met Paul (though we’ve known each other for around 20 years now) and talked about a possible re-release of “Scorn Defeat” and, as you may know, it actually happened and went really well. So when Sigh needed a new home for the new album, Peaceville was an obvious choice. I am very happy to work with them and really cannot wait for the new album to come out through them later this year!”

Paul Groundwell, Peaceville’s label manager comments on the signing “At once intrigued and captivated by Sigh ever since the release of the timeless ‘Scorn Defeat’, with Eastern themes, the Celtic Frost-tinged riffing and also the effective integration of piano into an underground type sound, there was always a certain dark magic to the band which made them unique among much else in the early 90s scene. Certainly, Sigh went on to bigger things and much deserved success, exploring and embracing the weird and the wonderful without artistic compromise over the years. Venturing through the realms of the avantgarde and more traditional classic metal, the old school heart always remained. And so, with such an impressive body of work preceding them, we’re excited to witness this next chapter of the band’s legacy on Peaceville”.

Stay tuned for more information on the release of the new Sigh album.

In the meantime fans can enjoy a new 2 disc version of the bands Eastern Darkness album which will be released on Peaceville on 22nd April and is available to pre-order now https://burningshed.com/store/peaceville/sigh_eastern-darkness_2cd

‘Eastern Darkness’ contains a comprehensive collection of Sigh’s early rare works showing their swift musical evolution as well as the strong utilisation of keyboards in their compositional process throughout. The collection includes the band’s legendary demo tapes, ‘Desolation’, and ‘Tragedies’, plus their EPs and rarities, as well as contributions to various compilation releases in the mid 1990s.

Considering Sigh’s well-known regard for UK legends Venom throughout their career, ‘Eastern Darkness’ also contains the band’s own tribute to the 1980s black metal pioneers, in the form of tribute ‘To Hell and Back’, originally released on tape in 1995.

This edition of ‘Eastern Darkness’ is as a 2CD set and includes a booklet featuring an interview with Mirai Kawashima about the early years of the band, along with his recollections of the origins of each title contained within the release.