5th March 2019 0 By John Deaux
Rainbreakers are delighted to announce that they’ll be supporting Wille and the Bandits on tour, as their special guests, in March 2019
Shrewsbury based four-piece Rainbreakers expertly brew up the anger, anguish and frustrations of modern-day life and bottle such feelings into charged, passionate songs delivered by Ben Edwards’ forlorn, poignant vocals, carried by melodies that artfully alloy and interweave blues, soul and gritty garage band rock. What’s more, as gig-goers and Rainbreakers’ growing fanbase will tell you, it’s brought to life by committed, passionate performances.
Vocalist and lead guitarist Ben Edwards says “We are really excited to be out on the road again with our friends Wille and the Bandits. It’s great to be around other musicians who have a similar mindset to ourselves to the business and outlook on life! We really connected with them last time we were on the road, and this time we are out for a month which will be a hoot!”
Touring with such kindred spirits brings Rainbreakers’ distinctive blues, rock and soul to a range of UK venues, giving new fans and old fans a chance to sample and soak up their introspective brand of brooding, quintessentially English-rooted-rock.
Of the forthcoming tour, Ben reflects, “It’s the longest tour we will have done which we are eager to do and play our most extensive set of dates across the U.K. for the first time! It’s always good to play in new places to new faces and that is what this tour will be about for us. Though we do hope to see some familiar faces too!
It’s crazy to think that our small band from Shrewsbury, Shropshire with no label behind us is able to join a national support tour like this, and this is just the beginning! We are already booked to play in several new countries this year which is incredible. We are indebted to bands like Wille and the Bandits for gifting us the opportunity to come and open on their tour and play to new audiences. It helps us grow and we are very thankful to them and their team for having us along for the journey.”
Rainbreaker’s highly-anticipated debut album ‘Face to Face’ dropped in August 2018, having been recorded at Monochrome Studios with renowned producer Tom Gittens (who’s worked with Robert Plant and Broken Witt Rebels). 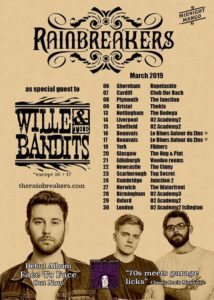