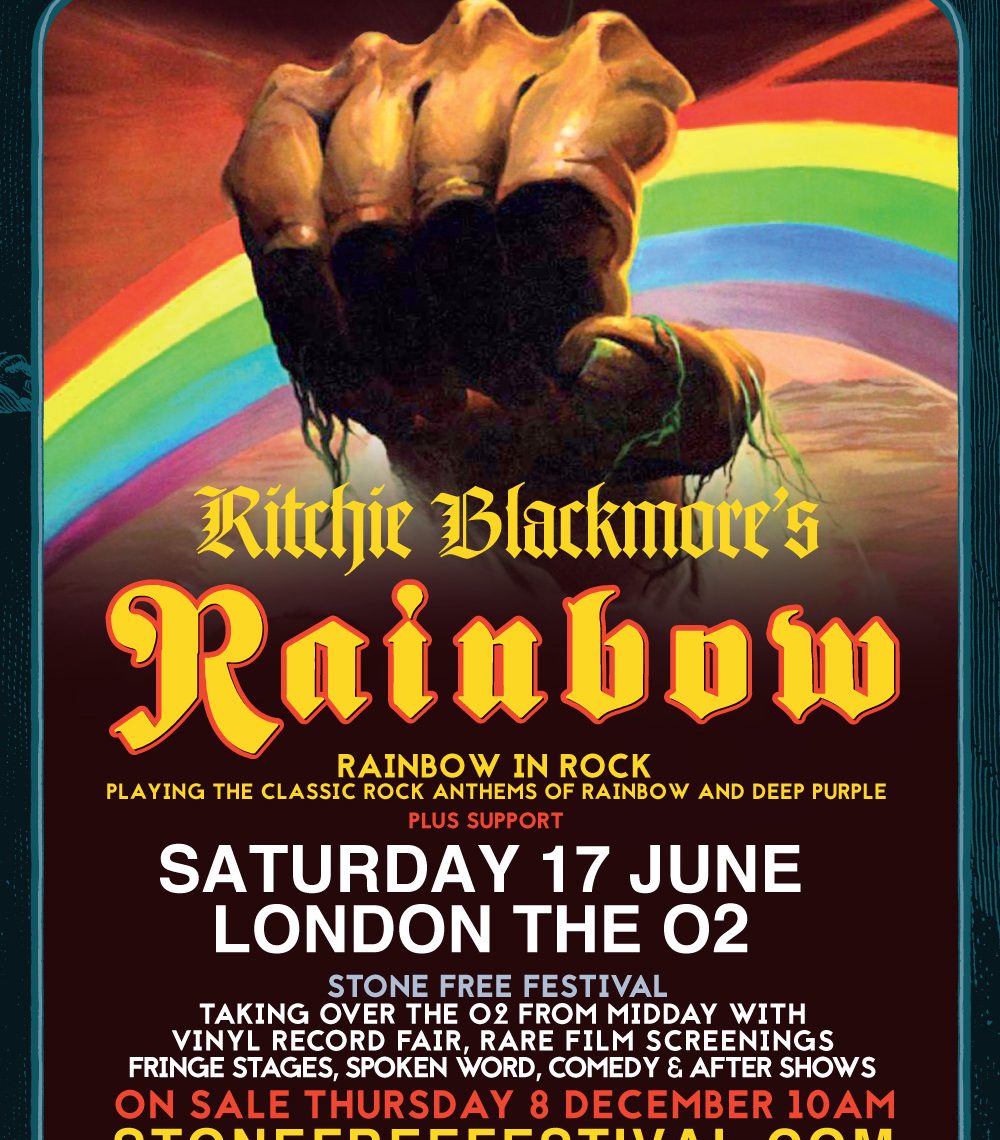 Following the triumphant sold-out show at the Birmingham Genting Arena earlier this year, Kennedy Street and Kilimanjaro are pleased to announce Ritchie Blackmore’s Rainbow will be returning to tour the UK in June 2017. The very special opening night will see them headlining the second annual Stone Free Festival at The O2, London, which will be Blackmore’s first London show since 1995 with further shows in Manchester, Glasgow and Birmingham.

Playing classics from both Rainbow and Deep Purple’s anthemic catalogue, the legendary guitarist needs no introduction and is universally acknowledged as a singular and visionary talent, one who has helped shape and define the landscape of rock music and the evolution of the guitar at its core.  With a background immersed in classical and r’n’b he was a founding member and driving force of Deep Purple, going on to form Rainbow in 1973, who sold in excess of 28 million albums.

The Ritchie Blackmore Rainbow tour promises to be an unmissable event, not only for Deep Purple and Rainbow fans, but also those who want to soak up the electrifying genius of the legendary guitarist live and to revel in the unforgettable songs he crafted with two of music’s most celebrated bands.  Blackmore will also be joined by former stalwart Meister Bob on bass, Blackmore Nights’ drummer David Keith, Stratovarius’s keyboardist Jens Johansson and singer, Ronnie Romero from Santiago, Chile who Blackmore describes as, “a cross between Ronnie James Dio meets Freddie Mercury.”

Starting the UK tour at The O2 in London, promoters Kilimanjaro & The O2 are delighted to be able to announce Ritchie Blackmore’s Rainbow will be the headline act for the 2017 Stone Free Festival.

Following the hugely successful and highly acclaimed inaugural Stone Free Festival in June this year – which featured electrifying performances from the likes of Alice Cooper, Rick Wakeman, The Darkness, Marillion and many more – the festival returns with even more stages next year, utilising the full array of facilities at The O2 including the Brooklyn Bowl. It will again feature a full line-up of artists and events such as the Speakeasy Lounge and the vinyl fair, alongside special acoustic performances, cinema screenings and exclusive after parties.

Further details regarding the line-up of Stone Free Festival 2017 will be revealed in due course.

Tickets go on sale Thursday 8th December at 10am and are available from:
AXS.COM / TICKETLINE.CO.UK / MYTICKET.CO.UK / SEETICKETS.COM

BLOODSTOCK wish you a Metal Christmas!