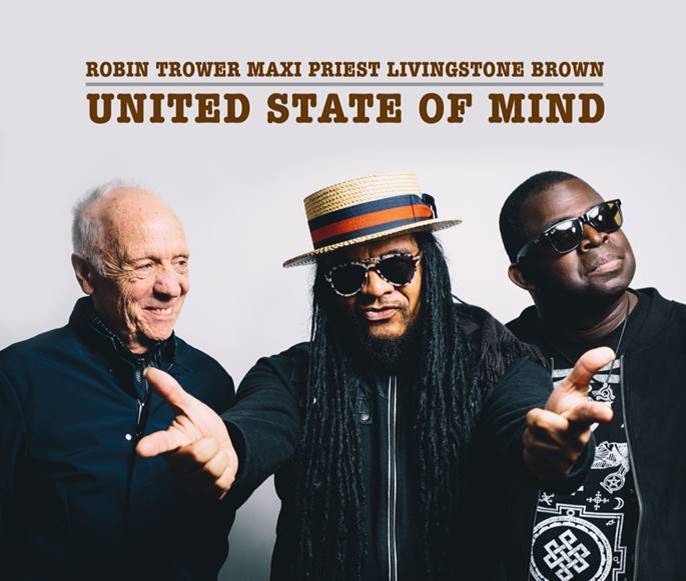 Maxi Priest is an iconic British reggae vocalist, with Jamaican heritage, who’s best known for singing reggae with added R&B flavour, creating that potent blend called reggae fusion. Maxi was a pioneer in the genre and is acknowledged as one of the most successful reggae fusion acts of all time.

Virtuoso rock  guitarist Robin Trower found fame with Procul Harem, then went on to lead his very own power trio: The Robin Trower Band. His album ‘Bridge of Sighs’ has sold millions of copies worldwide. Classic Rock Review described Robin as a “guitar player of unparalleled influence,” particularly for the passion and soul of his playing, as well as his virtuosity, all of which have inspired countless young guitarists to take up the instrument.

Livingstone Brown, meanwhile, is a talented producer/mix engineer and musician. As a session and touring musician during the 80s and 90s, Livingstone worked, separately, with Robin Trower and Maxi Priest; not to mention in his long career other high-calibre artists such as Ed Sheeran, The Waterboys, Tina Turner, Bryan Ferry, Kylie Minogue, De La Soul, ABC and Bill Withers —to name but an impressive several. 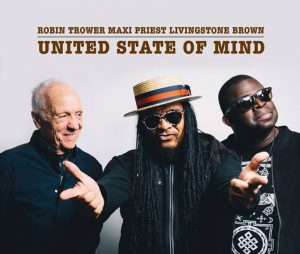 Maxi, Robin and Livi’s distinct talents proved a winning combo: in songwriting, in performance and in production, and thus the trio’s chemistry and collaboration led to ‘United State of Mind’: an album on which you’ll find Maxi’s trademark smooth as silk, mesmerising vocals, Robin Trower’s soulful, passionate guitarwork, and Livingstone’s catalyst flair and Midas Touch.

What brought this remarkable trio together was a chance meeting at Livingstone Brown’s studio in Brixton in the UK, caused by what Livingstone calls “a diary malfunction”.

“When Robin first met Maxi,” says Livingstone, “I thought this cannot end well. Wow, this record is proof I was so wrong!”

Maxi Priest puts it this way: “Three different minds coming together trying to create a unification that we can give as a gift to the world. We wanted to come together to do something positive. I’m overwhelmed and proud of this album. It’s all live instrumentation — fully organic music. This album is for music lovers: all genres.”

“USM was one of the first pieces of music that I came up with for Maxi,” reflects guitarist Robin Trower, “as soon as he heard it, Maxi had the lyric idea of ‘On a lonely highway’ and everything started to fall into place from there. I think it is one of the best tracks I’ve been involved in. Working on the album with Livi and Maxi was a complete joy from beginning to end.”

“ A coming together of three creative souls who found some common ground, and made a little magic happen”  John Masourii. Echoes.

Writing for Blues in Britain, Pete Clack praised “Three great artists proving together they can be so creative making an album of such sure lasting pleasure.” “From the opening title track,” Pete also proclaimed, “it’s one of those releases that catches you and never lets go.”

For RawRamp, the talents of the three artists, separately and in collaboration, stood out: “This is a decorous and dignified album of graciously exquisite sounds presented by three superlative talents. The songs will steady your nerves and settle your jitters. Pure velvet harmony.”

“But if you are looking for a seriously well performed album with cool, coastal drive appeal and a bucketful of smooth ‘n’ silky, soul-funk-blues, you may well have found the answer” say  FabricationsHQ

Elegant and soulful, yet gritty and danceable when called for, United State Of Mind is a collaboration built on mutual love and respect – the heartfelt lyrics, the stunning call and response between Maxi’s vocals and Robin’s guitar, not to mention the additional flourishes brought to the table by Livingston Brown all serve to make this an absolute joy. Put simply, United State Of Mind is an inspirational offering that will brighten even the darkest day. 10/10 Sonic Abuse

The end product — ‘United State of Mind’ — is an outstanding album, rich in commercial appeal, that’s beguiling, seductive and so smooth that it’s virtually frictionless. Also, full of verve and virtuosity that’s not only going to appeal to fans of the trio’s solo work, in reggae, rock and beyond, but is bound to delight many more besides. Definitely one to check out!

Head Out to The ‘Wild Wild West’ With Elles Bailey!