18th April 2017 0 By John Deaux
French rock duo SINNER SINNERS released their third full-length album, entitled Optimism Disorder, in March. The album is now available in North America on limited edition, colored 12-inch vinyl via Last Hurrah Records!
As pictured above, the Optimism Disorder jacket features matte lamination and UV spot gloss, guaranteed to showcase the skull and hangman’s noose, seemingly popping out of the palm tree. The vinyl comes in two different color configurations. Both options are a schizophrenic blend of opaque and translucent hues. The run is limited to 500 copies (250 of each color). Ordering two records ensures the buyer that one of each color will be received. Order now via www.sinnersinners.com/store or http://lasthurrahrecords.com/sinnersinners-order.html.
A special FREE vinyl release party and SINNER SINNERS performance, hosted by Last Hurrah and Lethal Amounts, will take place on Friday, April 28 at the Monty Bar in Los Angeles, CA. The show is 21+ and doors open at 9:00pm. Be there by 10:30pm to catch SINNER SINNERS! 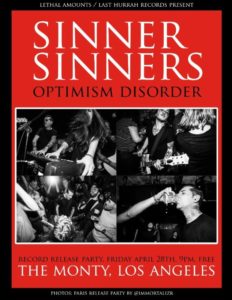