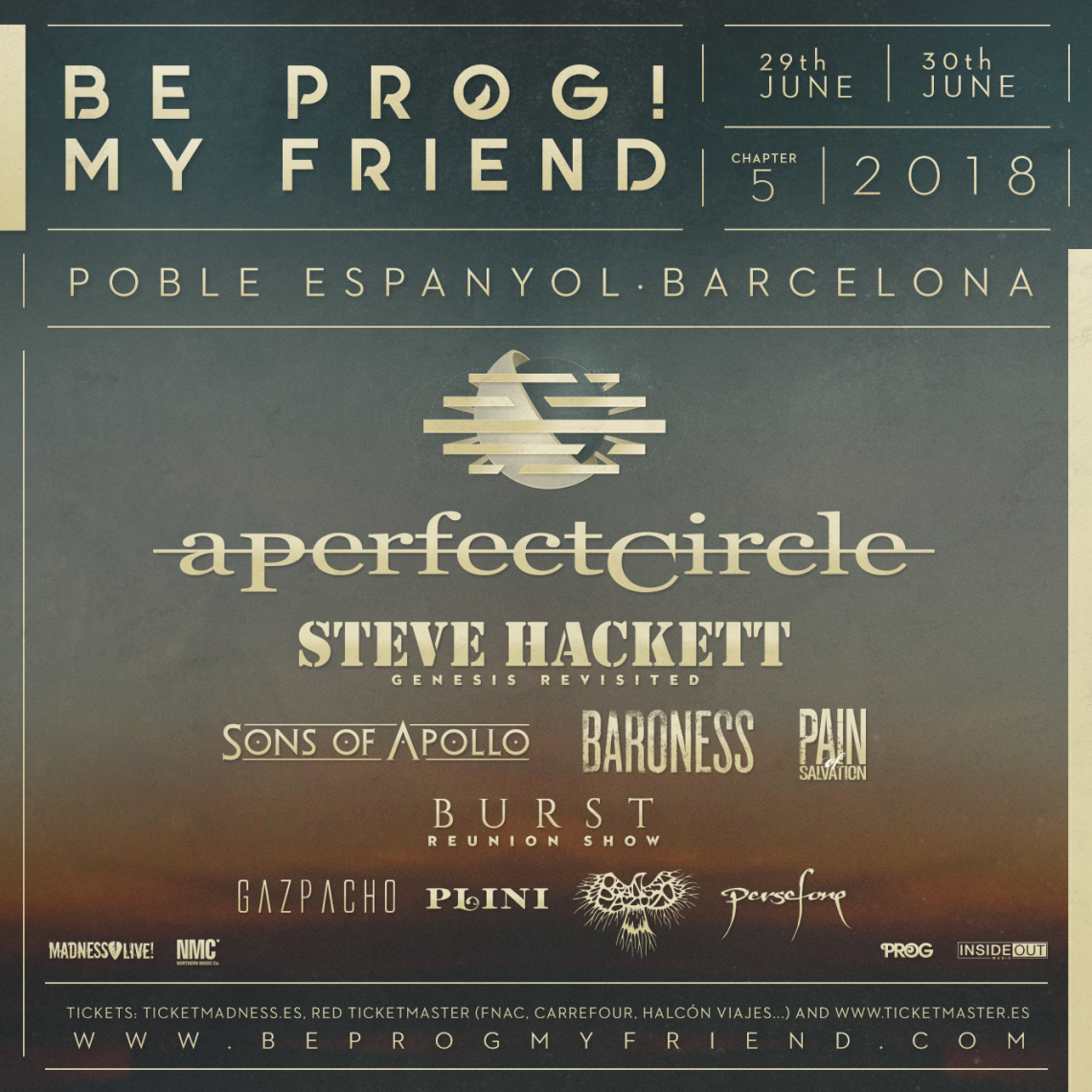 Be Prog! My Friend have announced Steve Hackett as the 2nd headline act for the festival next year. The former Genesis guitarist will close the festival on the Saturday while A Perfect Circle headline the Friday. The organisers add:

‘Steve Hackett is coming to Be Prog! My Friend 2018 and will be playing a mix of tracks from the Genesis back catalogue as well as his solo material. Hackett has released more than 30 solo albums in addition to the 7 he did with Genesis. His set is not to be missed! Musicians playing with Steve will be Roger King (keyboards), Gary O’Toole (drums & percussion), Rob Townsend (saxes & flutes), Nick Beggs (bass) and Nad Sylvan on vocals.

The festival have completed the line-up for next year with the addition of Swedish progressive metal outfit Burst, who split in 2009 but will reform to perform at Be Prog! My Friend for a special Burst reunion show. The festival organisers comment:

‘We wanted to see Burst at Be Prog! We needed to see Burst in Poble Espanyol. Although they broke up in 2009, following their masterpiece ‘Lazarus Bird’ we decided that this didn’t matter. Burst will join forces again to play for us.  Despite their short life as a band, they have one of the finest discographies for fans of progressive music. You will love Burst.  They are just the perfect band to complete 2018’s line up and we could not be more happy and honoured for having Burst play such a special show for Be Prog! My Friend 2018.’

Named as ‘Event of the Year’ at this year’s Progressive Music Awards the Barcelona based festival, sponsored by Inside Out Music, has played host to the likes of Opeth, Steven Wilson, Anathema, Devin Townsend, TesseracT, The Pineapple Thief, Magma, Agent Fresco, Camel, Meshuggah, Katatonia, Riverside, Ulver, Animals as Leaders, Ihsahn, Alcest, Jethro Tull and Marillion and will take place on 29th and 30th June next year.

Tickets are on sale now priced at 130 Euros alongside exclusive hotel deals from the festival website: