They say that timing is everything…and today’s review absolutely reinforces that statement. If I may use George Carlin as an example here, as a comedian he wasn’t one to bite his tongue and said A LOT of things…things which may provoke the ire of many folk. This in all fairness though was his strength because frankly, he couldn’t care less. On September 9th 2001, he recorded his final special, which in typical Carlin fashion was ludicrously titled “I Kinda Like It When A Lotta People Die”…two days later 9/11 happened. Now do you think that special saw the light of day? Did it fuck. Bad timing folks, bad timing…

Today’s band fall into a similar set of circumstances…though I really don’t think it was intended to be fair. SUPERHORROR are an Italian horror-punk outfit consisting of vocalist Edward. J. Freak, guitarists Didi Bukz and Jimi, bassist Mr.4 and drummer Franky Voltage…and according to their bio, their back story is straight out of an 80’s B-Movie comedy gorefest, but it’s that same inspiration that raises questions over the timing of their latest album; “Italians Die Better”.

Sure, the name is in part a reference to Italy’s status as one of the most notorious producers of exploitation horror cinema, thanks to the likes of Dario Argento, but…the world is, if you didn’t already know, currently amidst an on-going struggle with the Coronavirus pandemic, with one of the worst affected countries being, you guessed it; Italy. At the time of writing, Italy has sadly lost over 16,000 citizens to the virus, the highest death toll of any country…yet here we have SuperHorror, releasing an album called “Italians Die Better” on April 10th. Bad timing folks, bad timing…let’s see if Eric Bischoff was right however and find out if controversy does indeed create cash.

We open up with the title track, and we get some grainy audio of basic percussion and strings that represent the atmospherics of classic horror; somehow aesthetically bridging the tones of early Transylvanian settings and even certain aspects of unsettling tribal ideology, like the darker aspects of King Kong or even darker cannibal jungle scenarios. It sets the scene for the bands influence effectively as the track then tears into an onslaught of up-tempo trash-punk with an enjoyable guitar solo, and lyrically it plays on their gimmick of actually being dead themselves, finding their place in society. Its tongue in cheek, it’s got good pacing and rhythm and ultimately it’s an enjoyable start.

Next up we have “Average Horror Band” and the level of self-awareness has to be admired quite frankly. MURDERDOLLS and even WEDNESDAY 13 himself is falling victim to his own gimmick at times as the novelty is wearing off over time…so let’s not mince our words here; SuperHorror are a BTEC Murderdolls at best, so we have to take them at face value.  The instrumentation is fine, with some of the guitar work in particular sounding great, while Edward’s vocals are coarse enough to add ample character, but they hit the nail on the head with this one. “Happy Dead” takes the gimmick all the way with a Friday 13th inspired spin on classic 70’s American sitcom “Happy Days”…and it’s hard to tell if The Fonz would give this the thumbs up or not. The garage glam aesthetics of the track allow for a bold, up-beat and melodic listen and it’s cheesy for all the right reasons.

As far as the rest of the album goes, you have to remember, Murderdolls themselves are a B-Movie horror punk band, so does that make SuperHorror straight to VHS? I know what you’re thinking; you’re thinking I meant to say DVD…no I meant VHS. I’ll go as far as Betamax, don’t push me. “Die As You Are” does its best attempt at some sort of anti-ballad with its lower tempo and more subdued delivery…”L2D” houses more of a classic glam-inspired rock ‘n’ roll style, as does “Graveyard Dolce Vita”, before we eventually finish on “Pensiero Violento”, which does end things on more of a raw, punk tone, combining elements of say, ANTI-FLAG and RED TAPE with guest vocalist Irene Viboras and it does close the album on a stronger note. Sadly however the bulk of the album is summed up by track two and they are in fact, an average horror band. The instrumentation and delivery of concept is generally OK, but despite some enjoyable guitar work, ultimately they’re a little more uninteresting than they are undead. Stay quarantined, stay isolated and stay safe…just like Covid-19, this album should pass by soon enough and we can all carry on with our lives, I mean come on lads, Italy has enough on its plate and it’s not even Dolmio day. 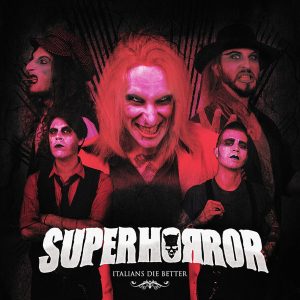 CURSE – The Awakening… and the Old