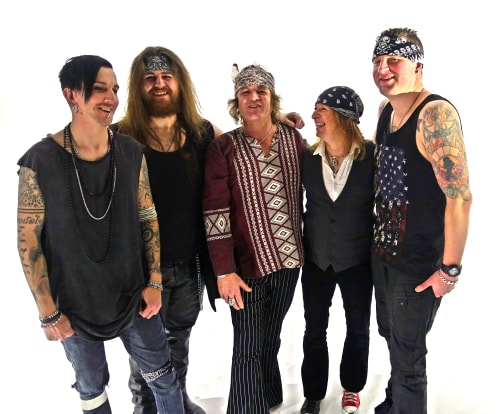 Takeaway Thieves release their debut 4 track ep “This is RocknRoll” May 24th. Self released on the bands own label Coffee n Mint Records, it was produced by Tim A. Duncan at John Sykes (Whitesnake/Blue Murder) legendary Berlin Studios.

Featuring the single “I Wish You Were Dead” as the opening track, a love song to the Elite. Followed by “Stardust” “ Slippin Slidin” and closing the e.p. as they do live with the title track “ This is RocknRoll”. With fast paced riff laden rock songs and an energetic performance, Takeaway Thieves have garnered a fast growing following and “This is RocknRoll” encapsulates exactly the bands swagger and what they are about, good time Rock n Roll.

“ We are proud of this ep and the fact it has captured the energy of the band which sometimes gets diluted in the studio.. We asked TT fans what they wanted to hear on our ep and these tracks came out on top of the poll as favourites, so that’s what we recorded.The cover was intentionally designed as a juxtaposition to the music and title of the ep”

JOHN DIVA & THE ROCKETS OF LOVE to release fourth single and video!