The Doors: Live At The Bowl ’68 Special Edition

In celebration of 50 years of The Doors’ legendary album L.A. WOMAN, The Doors: Live At The Bowl ’68 Special Edition will transform cinemas worldwide into concert venues giving fans the closest experience to being there live, watching two late members – frontman Jim Morrison and keyboardist Ray Manzarek, plus drummer John Densmore and guitarist Robby Krieger. Tickets are on sale now at https://www.thedoorsfilm.com/ 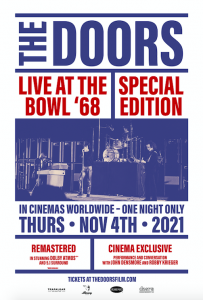 This special movie event features the concert in its entirety, including ‘Hello, I Love You’, ‘The WASP (Texas Radio and the Big Beat)’, ‘Light My Fire’, ‘The End’, and so much more. It also includes a conversation with band members John Densmore and Robby Krieger, plus exclusive brand-new performance footage.

Krieger says, “The magic that has been done to enhance the picture and sound quality of this show will make everyone feel as though they have a front row seat at the Hollywood Bowl.”