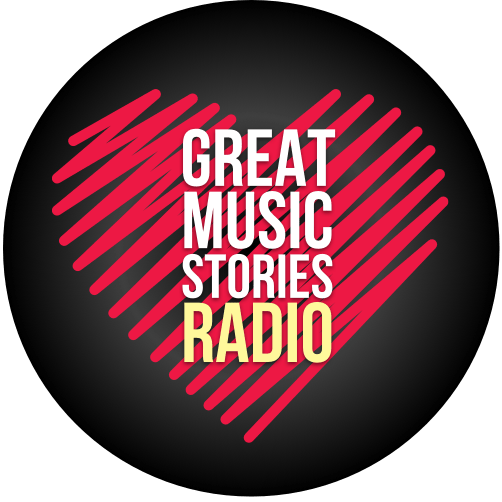 Last weekend, 63 bands came forward to take part in Spirit of Wildfire 2: a 3-day-weekend ‘festival-on-radio’ that showcased bands to new audiences, promoted the importance of supporting band webstores during the non-gig era, and raised money for NHS charities. This festival-on-radio venture has proved such a success that the organisers are keen to run another, so are now inviting artists and bands to sign up and take part. 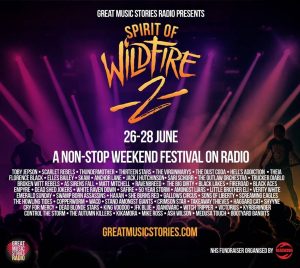 Spirit of Wildfire 2 was conceived and run by GuyB new internet radio station Great Music Stories Radio. With traditional festivals off the table for 2020 Great Music Stories’ founder GuyB decided it was time to host a full 3-day festival on radio, on GMS’s new radio platform, on their website. Guy sent an open invitation to bands, managers, and PRs. Within just 72 hours 50 bands confirmed their interest: this rose to 63 bands, who performed 20 minute sets and gave interviews.

“In the last three months,” reflects Guy, “everything has changed and it’s likely the world after COVID-19 won’t be the same as it was before. Many musicians have innovated in recent months with Facebook live and acoustic Zoom sessions. But whilst that’s great, a lot of music fans have missed that full-band live sound and live sets in good audio quality.

Spirit of Wildfire 2 drew a strong audience, not just from rockers, but also people new to the genre; what’s more, listeners were encouraged to buy one band album from a band over the weekend. In addition, Grassroots promotions firm ‘Reach 360’ joined the project to run a donations page for NHS charities.

Great Music Stories was set up in January 2015 by GuyB as an audio interview site, focusing on telling the stories of a new generation of British rock bands. At the start of lockdown Guy set up a radio platform on the site for weekend broadcasting. Since 2015 Great Music Stories has aired more than 850 band hour specials and more than 2,000 additional interview shorts making it, possibly, the biggest recorded interview archive on the rising rock scene.

As Guy explains, “It’s barmy really: this isolation-era radio station is run from a caravan in a field in Sussex. But for one 3-day weekend, we brought 63 bands together who shared a passion for original live music to be played and heard. We’ve spent a lot time in recent months reflecting on what can’t happen at the moment. Last weekend suggested it’s time to focus on what CAN be done.”

In that can-do spirit, following the resounding success of Spirit of Wildfire 2, Great Music Stories is delighted to announces today that it is planning another radio festival weekend for later this Summer: one that this time will support wellbeing issues and donations page for a mental health charity. Bands can submit their interest in the festival and to get involved at https://greatmusicstories.com/the-modern-rock-wellbeing-festival/

N.B. Before moving on to the next event, Great Music Stories would like to thank all the bands that stepped up to take part in last weekend’s festival event.

South Of Salem proclaims ‘The Sinner Takes It All’