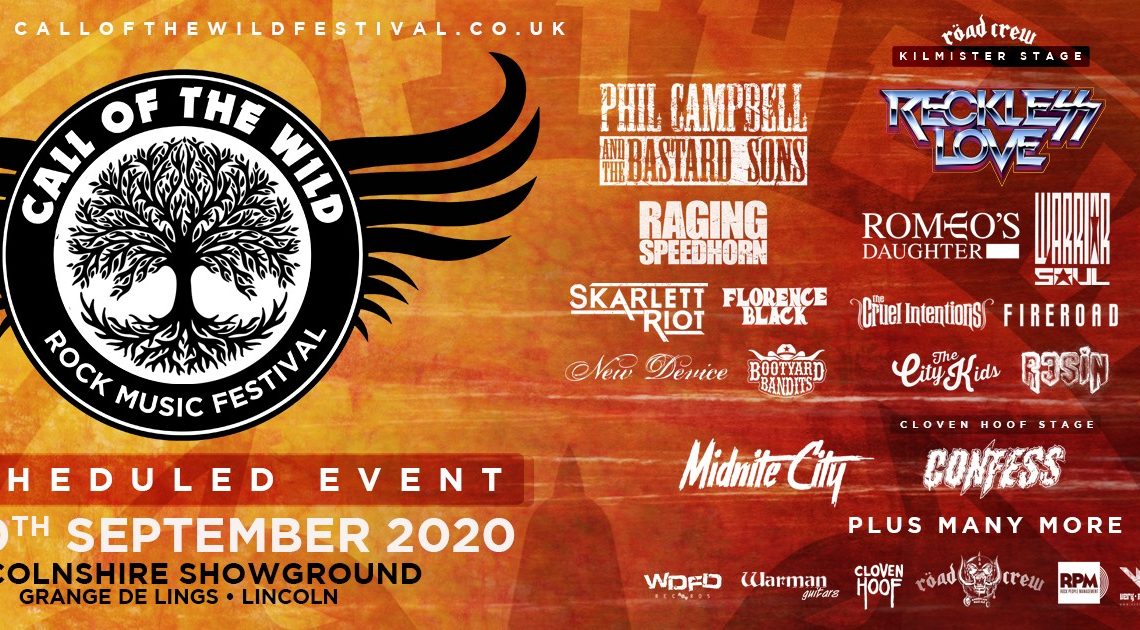 THE WILD GET RECKLESS!

Organisers of Call of the Wild Festival have responded quickly to the outbreak of coronavirus and the fight against it, rescheduling Lincolnshire’s biggest and best rock festival from May to September: Friday 18th to Sun 20th September 2020, to be precise.  Of course, the change in dates mean some acts aren’t available. Glam Punk legend Michael Monroe was a personal hero for festival booker Raz White. Replacing him as the Saturday headline presented quite a challenge, but Raz stepped up to the task, working swiftly to secure an equally well-loved band who carry a similar vibe, with their balls-out, leave-it-all-on-the-stage, live performance.

This will be Reckless Love’s only UK show in 2020 and organisers promise it will provide the much-needed shot of good-fun rock ‘n’ roll we will all be seeking, come September!

British AOR band ROMEO’S DAUGHTER are welcomed as Special Guests on the Saturday evening. Active for over 30 incredible years, the band have been firm favourites on Radio 1’s Rock Show & even turned up on the Nightmare on Elm Street 5 soundtrack with Heaven in the Backseat. Their live performances are very popular, with vocalist Leigh Matty a firm favourite with all Rock fans. 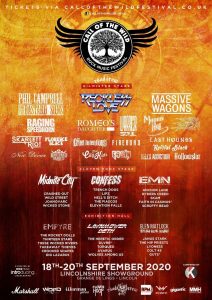 Always keen to show faith in the rising stars of tomorrow and hail the British New Wave Of Classic Rock bands, Call of the Wild are delighted to confirm Scottish rock band MASON HILL as Special Guests to MASSIVE WAGONS on the Kilmister Stage on Sunday evening; also, fellow Scottish rockers ANCHOR LANE as Special Guests to EVERY MOTHER’S NIGHTMARE on the Cloven Hoof stage, Sunday evening.

“Both of these bands are flying the flag for Scottish rock, just like GUN & THE ALMIGHTY did back in their day,” proclaims Raz White, “In fact, GUN still is, and as strongly as ever! MASON HILL are one debut album away from shooting to fame and I have absolute faith in the band being a huge favourite over the weekend of the festival.”

West Midlands-based SISTER SHOTGUN bring a huge slab of melodic metal to the bill. Described as a furiously-entertaining live act, they will be very popular with the COTW audience.

The phenomenal project, started out by multi-instrumentalist J.J. Watt, THE CITY KIDS has developed into a fully-formed band, featuring bassist Berty Burton from TIGERTAILZ, Dennis Post from WARRIOR SOUL & Dave Sanders from FALLING RED. Their debut album also includes a whole host of musicians from around the world, including Tracii Guns & Kory Clarke. THE CITY KIDS will perform on the Kilmister stage on Saturday afternoon.

Meanwhile, bringing full- throttle punk ‘n’ roll to the proceedings are THE HIP PRIESTS, whilst LYONESS lay down huge groove-laden riffs with tasty vocals. Manchester’s SCRUFFY BEAR – who massively impressed earlier in the year at ROCKMANTIC FESTIVAL – are also added to the bill.

What’s more the organisers have released 500 FREE weekend tickets to NHS staff – of which, a few are still up for grabs – as a thank-you for their huge effort to save lives during the coronavirus pandemic.

Check the COTW website at https://callofthewildfestival.com/ for further info and updates.