With this being my first time going to HELLFEST I had no idea what it would be like. I’ve seen pictures, watched videos and heard stories but it didn’t prepare me for how amazing it would actually be. 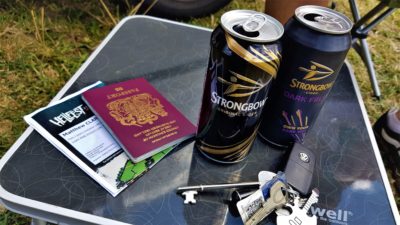 The journey was long and the camping, for someone who is a bit of a neat/control freak, was as uncoordinated and indecisive as the government, with tents and cars cramming into every nook and cranny of the streets of Clisson. But as soon we took the first stretch out of the van and tootled on down to get our wristbands, it instantly felt familiar but at the same time quite different and exciting.

The main entrance is made of giant guitar amps, 20-30 feet tall and in big neon green letters the HELLFEST sign stood out like a shining beacon, guiding us weary travelers home. As we entered through the main gates there was a hive of activity with shops and a huge market filled with all sorts of clothing, vinyl’s, guitars, drinking horns, food, booze and even Harleys! In the centre of all this was the HELLFEST tree, looking dead and rotten, made of scrap metal and opposite this was a small stage (with a frigging wrestling ring attached!) where one of the first bands of the weekend was pounding away. 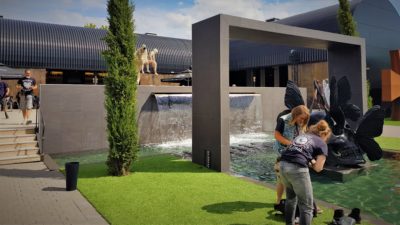 We eventually made it into the main arena via the VIP area; which was well cool as it had two fountains, one with a little water fall and the other with five wring wraiths sat upon it. The VIP bar looked like it was modeled after the Sedlec Ossuary, with spinal columns running up the walls and big teeth for stools! Anyway I digress..

The main arena could have been something straight out of mad max, the bars and shops were all made of rusty shipping containers with chandeliers made of tires and sharpened pipes, lanterns that shot fire and a big meteor looking thing that puffed smoke. The three smaller stages, The Valley, Alter and Temple, were positioned next to one another near the entrance of the arena, the two main stages stood in front of us on the other side of the festival and hidden away to our left was the Warzone stage.

The food court, that had been updated from the last year Donk told me, had everything you could want, curry, pasta, burgers, ice cream, raclette baguettes, veg and vegan, the lot! It had plenty of seating and benches to lean on and in the middle was another fountain with a huge metal guitar in the middle that provided some shade under a wooden gazebo.

Just behind the food court was a wooded area that gave a shady retreat from the hot sun. At night there was more big lanterns in the shape of pillars and trees, it was such an atmospherically relaxing place to have a pint and a sit down.

Which leads me on to one of the most amazing things about HELLFEST. They had people with big backpacks on that came round and sold beer, literally dozens of them. This meant there were minimal queues and definitely not ones that spanned the length of the entire site, which by the time you got to the end, you were more sober than when you woke up. 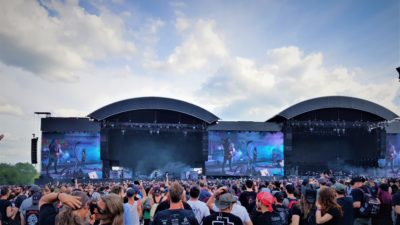 Last but not least, let’s talk about the line-up. It was awesome. Like all the other elements of the festival it covered all the basses (of rock and metal). It had doom, stoner, blues, rock, grind, thrash, punk, industrial, heavy metal, etc. and in having such a diverse line-up, it meant whatever you were in the mood for, they had it. If you couldn’t be arsed with Bear Tooth they had either Lamb of God or Emperor to satisfy your taste buds and this scenario happened all weekend. There was a good mix of underground and mainstream artists and I’m ashamed to say there were a lot of bands I had never heard of but now some of them are my new favorite bands. There were also a lot of bands that I had been wanting to see for years and finally got to cross them off my list. 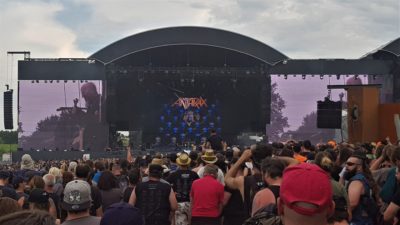 In summary it is definitely the best festival I have been to. Ever! Everything was just a step up from anything I have been to before. The fact that they can make permanent improvements such as the food court and buildings rather than just having everything made to be dismantled makes it feel, more real. The atmosphere is great and even though my French was pitiful, everyone I spoke to was lovely. The line-up was diverse and it didn’t disappoint me in that there was never nothing I didn’t want to watch. There was also no rain and there were people with back packs full of beer.