‘Livin’ In Suspicion’ is the new single by the Graham Bonnet Band and is taken from the group’s just released ‘Meanwhile, Back In The Garage’ album, which was issued on 13th July via Frontiers.

The song was written by Russ Ballard, who Bonnet has regarded as his talisman ever since he sang on the best known version of Ballard’s ’Since You Been Gone’ while a member of Rainbow in the late 1970’s. Bonnet states: “Russ has been a friend for many years and written songs for me in the past, as well as big hits for bands like Kiss, America and Santana. This time I really feel that almost by chance we have something that can be seen as another ’Since You Been Gone’ type of song, in that it is very memorable and people can instantly relate to it.”

‘Meanwhile….’ is the second album by the Graham Bonnet Band and follows ’The Book’ (2016). The record has been well received, with Bonnet commenting that “it has been incredible. People are saying this is the best record I have made, either for many years, or even ever. The feedback just keeps getting better and better. I think this record will have a long life!”

The new record has earned critical plaudits for not only for its songs and their lyrical subject matter (not to mention the singer), but also its production and skilled musicianship, with many praising the Alcatrazz-ian mixture of Hard Rock and Progressive stylings on display.

“Bonnet possesses a distinctive voice and is clearly enjoying himself here”

“Builds on the promise of ’The Book’ with stronger, more cohesive material. 4 out of 5”

mentioned right up there with them. 8 out of 10”

“This spectacular album proves ’The Book’ was not a fluke. The Graham Bonnet Band are

certainly here for some time to come” 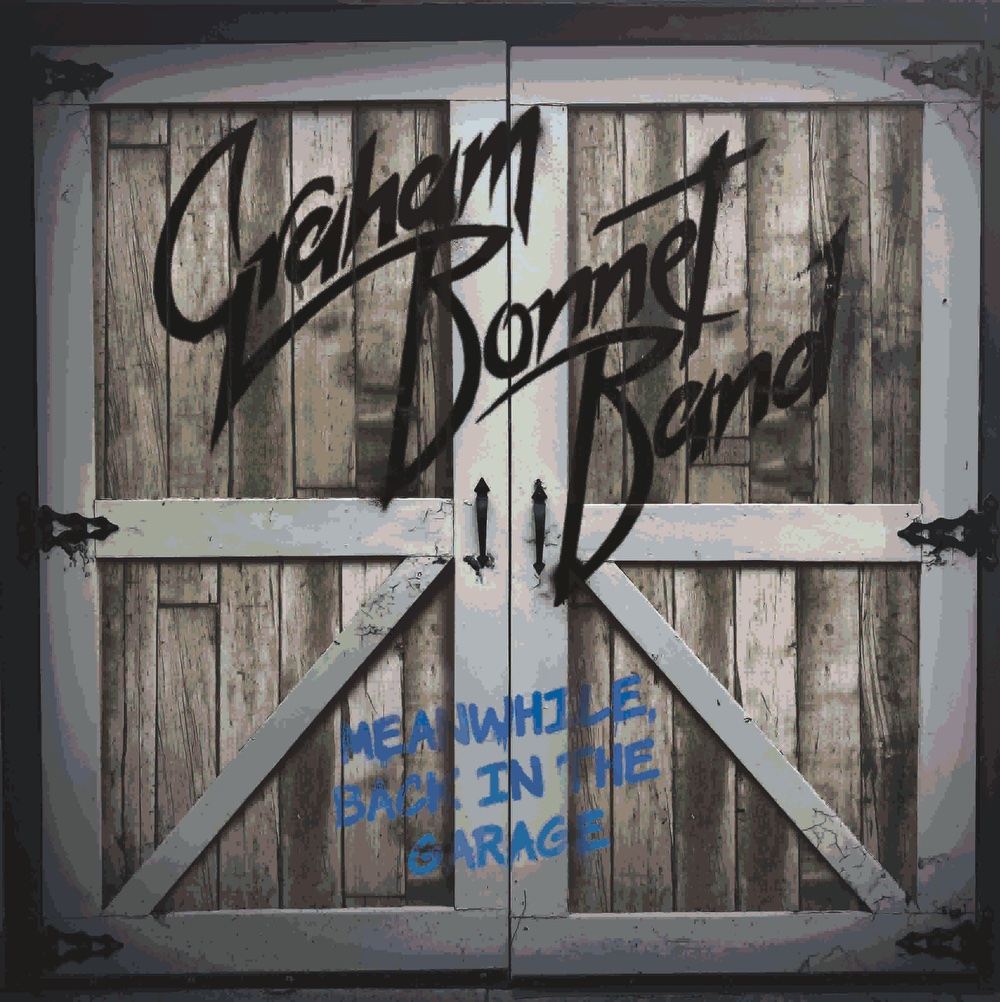 The Graham Bonnet Band will be on tour in the UK/RoI during August, with dates as follows : 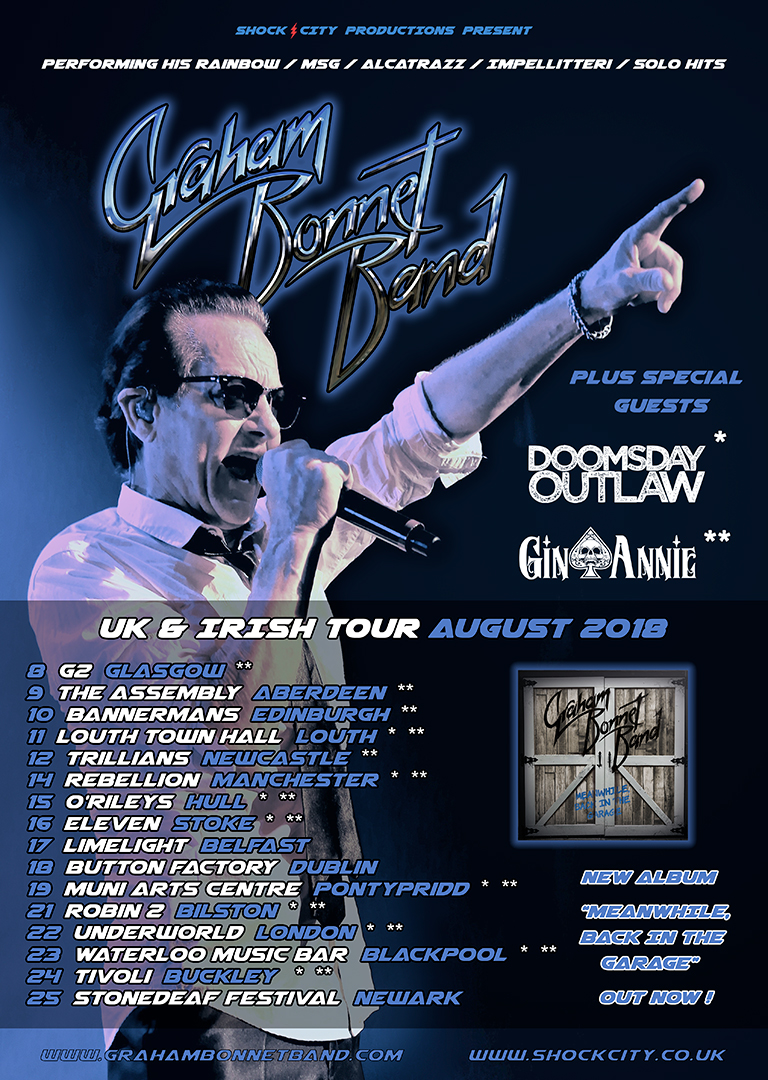 Graham Bonnet is a hard rock legend with a pedigree to back that statement up, with time served in  Rainbow, MSG, Alcatrazz and Impellitteri proving that he is one of the finest vocalists of his generation.

Fresh off a stint with Michael Schenker Fest, he has just returned with a new Graham Bonnet Band  album, ‘Meanwhile, Back In The Garage’. Crafted with Joey Tafolla on guitars (Joey plays on all songs except ‘Livin’ In Suspicion’, which features new member Kurt James), Beth-Ami Heavenstone (bass) Jimmy Waldo (keyboards) and Mark Benquechea (drums), ‘Meanwhile, Back In The Garage’ sees Bonnet demonstrating why he is still is one of the premiere vocalists in hard rock.

‘Meanwhile, Back In The Garage’ contains thirteen new songs with Bonnet laying down his inimitable voice over tunes that are full of great hooks and melodies. The package includes a bonus live DVD captured ‘Live From Daryl’s House’ (yes, THAT Daryl, of Hall & Oates) at a performance in early 2018.

“This is the most important album I have made in 35 years. I think fans of the classic Alcatrazz sound will love this record. The first single is about any young band starting today, which is like it was back when I began. As the lyric says “Take a number, It’s a hell of a line”! I have had a fantastic career and been very fortunate to play with some great musicians. I hope there is a lot more touring and recording to come!”  GRAHAM BONNET 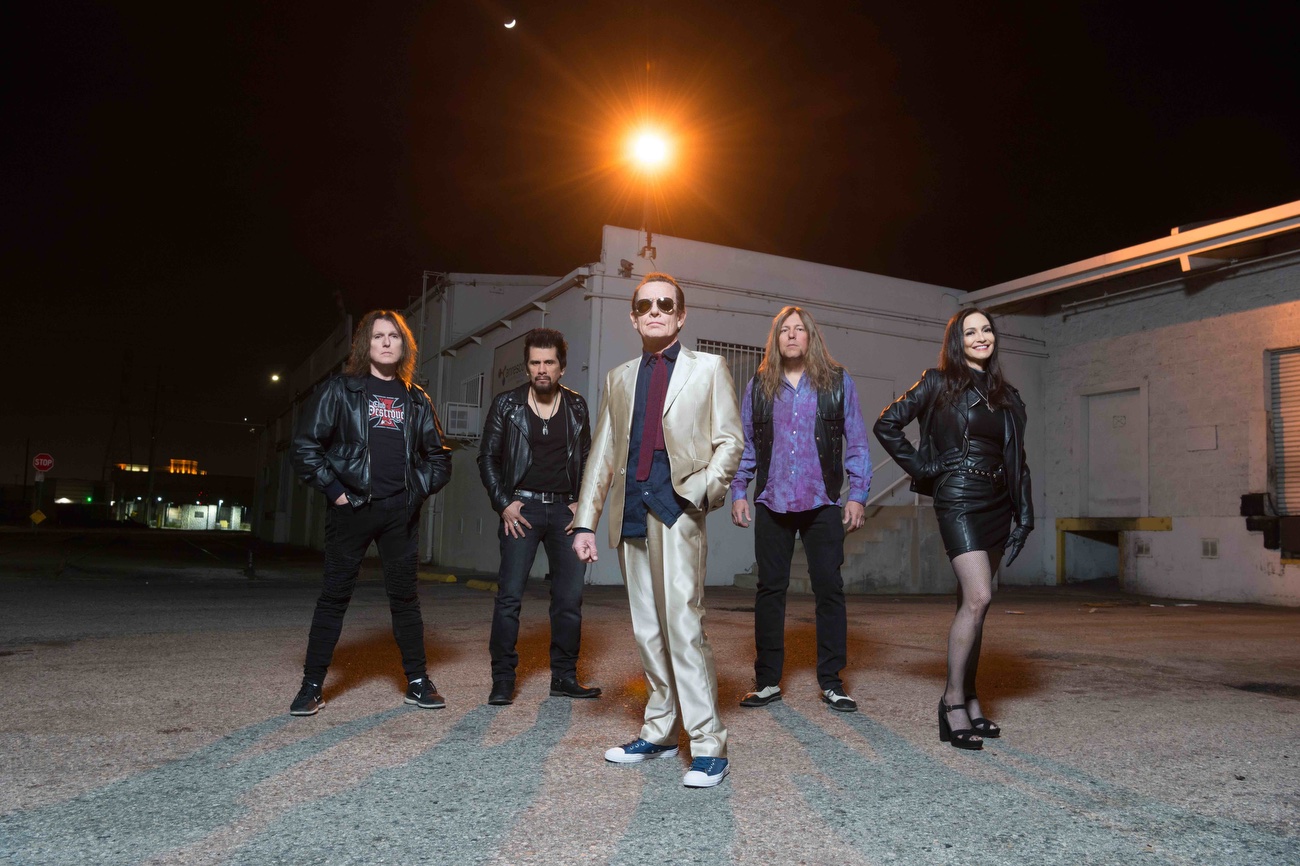