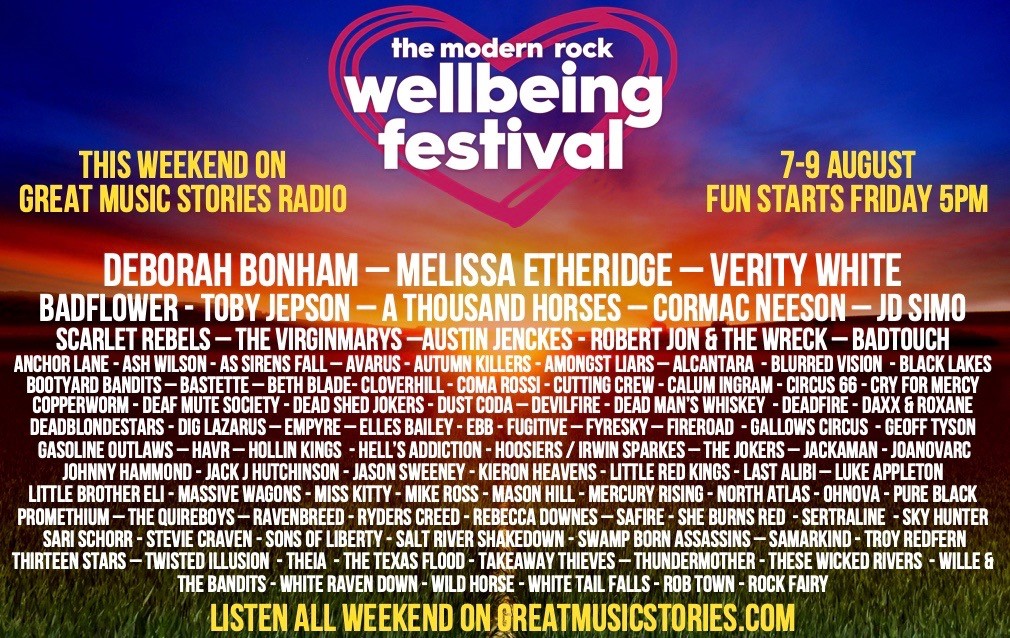 Following the storming success of June’s Spirit of Wildfire2 radio festival, Great Music Stories Radio is set to give music fans a special music festival this weekend: a music event that celebrates the role music has played to help people through lockdown, and also brings everyone together to have the conversation about mental health and wellbeing – aspects of life everyone has experienced in some form during the dark days of home isolation. The event will be broadcast between Friday 7th August – Sunday 9th August on greatmusicstories.com

The event originally aimed to present 60 bands, but the reaction has been so strong that the bill now will showcase 100+ acts from different geographies and sub-genres.

The headliners for the three-day weekend will all be female acts. Event organiser GuyB explains: “My Friday show has always celebrated diversity and equality with musicians. Some of our finest acts today are female artists. I can’t remember the last time I saw female acts take the headline slots for a festival, so I thought it was high time we did something about that. And headliners don’t come much better than Deborah and Melissa.”

Deborah Bonham headlines Friday night – the festival starts this Friday at 5pm – then Melissa leads the Saturday line-up on. Sunday’s headline slot has been earmarked for a rising talent and Verity White was chosen for the way she has created, entertained and championed wellness issues during lockdown.

Three of Great Music Stories’ five bands of the year (since 2015) return to open the festival on Friday, ensuring that the event opens with rock ‘n’ roll fireworks. Current band of the Year Scarlet Rebels will be joined by alumni bands of the year – Massive Wagons and The Virginmarys – to open the weekend in style!

The sets have been recorded especially for the weekend to give festival-starved rock fans the real sense of a festival. Some artists are doing unique sets. Ash Wilson will be playing a 25-minute tribute to Peter Green; Hoss from Thirteen Stars will be doing a second set of fun 80s guilty pleasure covers; and Daxx & Roxanne have recorded a full rock covers set. Over the weekend, a number of bands will also premiere new songs. 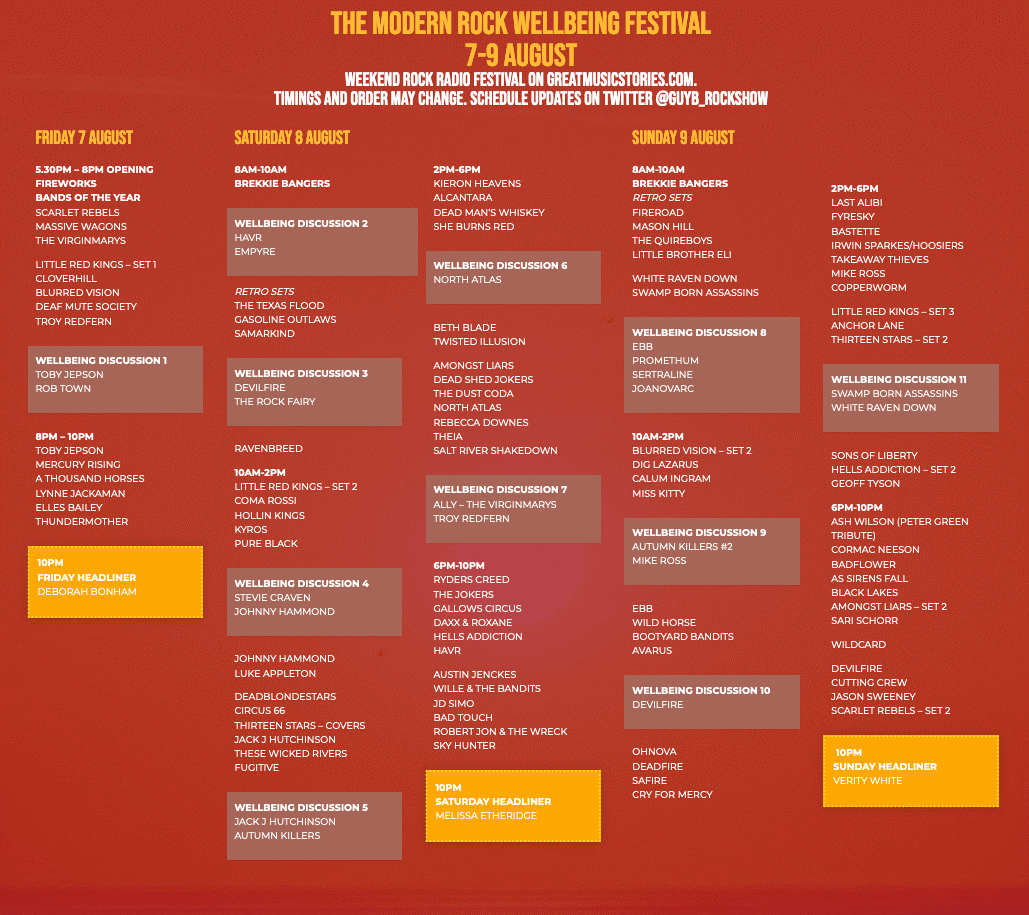 Great Music Stories has always been about the fusion of words and music, and during the weekend 20 artists and industry figures will discuss a range of wellbeing and mental health issues. Musicians Toby Jepson, Carrie from HAVR, White Raven Down and Ally from The Virginmarys will be joined by industry figures such as Rob Town and The Rock Fairy.

GuyB adds: “After the NHS fundraiser for the last festival, for this one there’s not a financial element. I’m really conscious that as the economic impact of the pandemic starts to bite, some people are worried about money. This weekend it’s really important that everyone can feel involved, so what we’re doing this way is focusing on awareness: raising of issues and charities, and the bands will lead the debate on the issues we need to research, support and share. Longer-term, changing mindset actually can do much more than raising some money over a weekend.”

People can listen to the festival on greatmusicstories.com radio from 5pm Friday to 11pm Sunday.

As Guy B says: “It’s a totally non-commercial event that’s all about the music and bringing people together. As we come out of lockdown, it’s a moment in time to celebrate the healing power of live music and I hope the happiness, positivity and togetherness will also help us all re-charge and prepare for the challenging times that may be ahead this autumn.”

At The Sun / Kieron Heavens