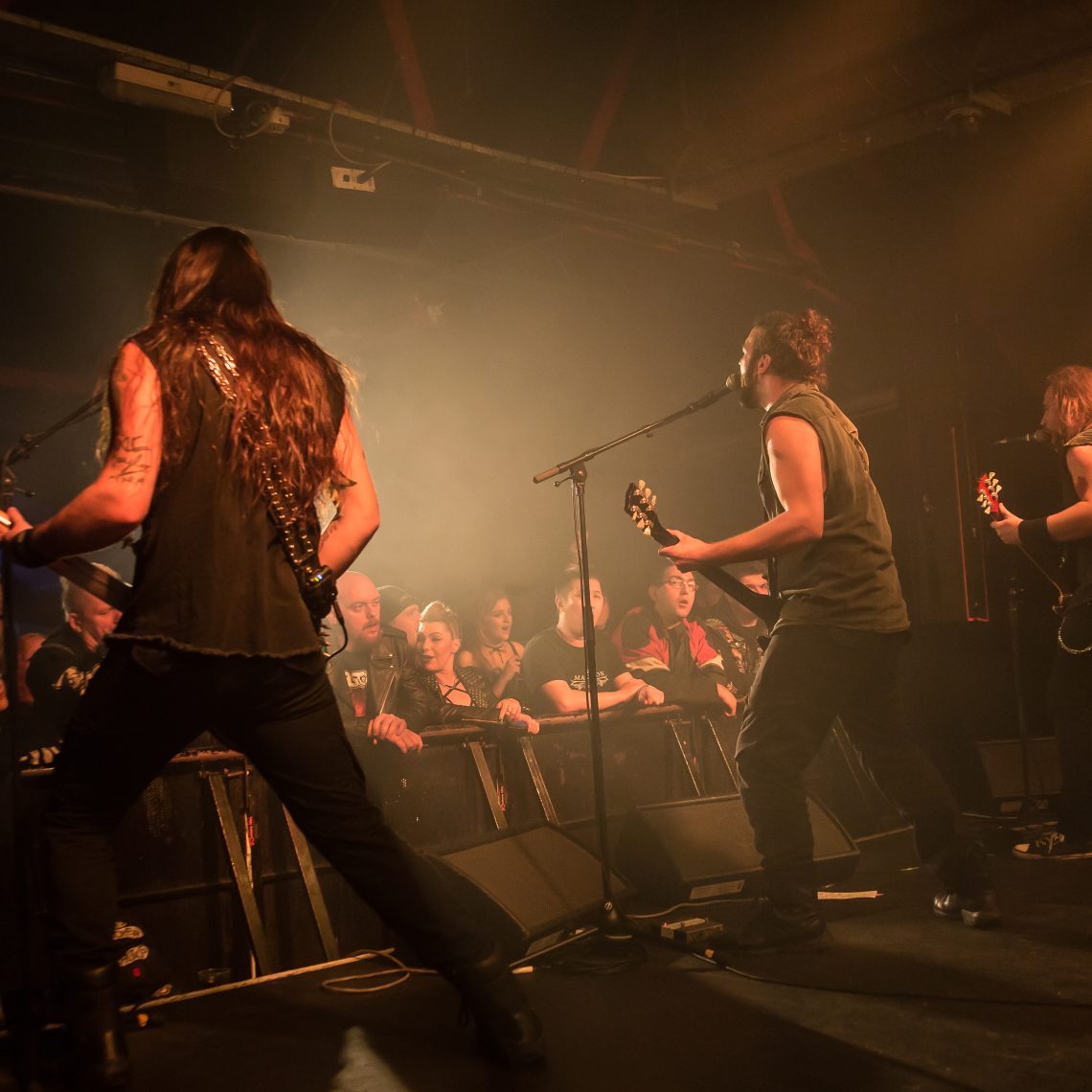 Absolva – The Defiance Tour, with Amethyst and Faith in Glory at Sound Conrol Manchester, 9th December 2017

It’s a Saturday night in Manchester and it was a showcase of British heavy rock and metal talent at the Sound Control; not only that but a pool of local talent on top. This was going to be a night to remember with headliners Absolva back on their own turf as they continue their Defiance tour. The night wouldn’t be right without their close friends in Amethyst and of course the up and coming Faith in Glory. So, the night air was fecking freezing and it’s warm in Sound Control so on with the show we go. 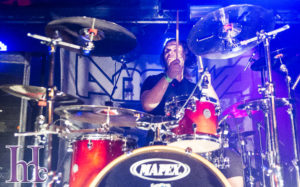 The opening of the night came in the guise of Faith in Glory (6); the lads squeezed onto the stage with two drum kits and begun the night. Their catchy riffs pulled off a strong sound that showed off the influences of Alter Bridge and Breaking Benjamin; their Hard Rock vibe was felt throughout their set, their opening ‘Black Minds’ kicked off the evening with a feel good enthusiasm that they produced last time out at SOS Fest 2017. There was a good core balance that showed excellent tempo and just enough reverb from the bass; however, despite this, vocally they were lacking, which is a shame. The quality is there in all other areas; the dual vocals appeared out of tune, having habits of changing tone as if their voices were breaking, which I doubt was intentional. Musically they have bags of talent; most of the energy came from drummer Ollie Eardley, his spark ignited the stage with his enthusiasm and movement, where others failed to deliver. On the plus side there was some good movement from the bassist Aiden Collins but his exposure was limited to being glued to the same area where the mic was situated at the right side of the stage for his backing vocals.

There were some great aspects to the set, the lyrics were crisp and well thought out; the riffs thick with hard rock referencing and the overall sound was catchy and occasionally infectious to the beat; this was felt more so with ‘Rebellion’, ‘You’re Not Alone’ and ‘Break the Rules’. The musicianship was there but it was let down by the vocals; as a band they have all the key ingredients to really make it, they just need a singer that can hold the notes needed for the sound they were creating to make them great. 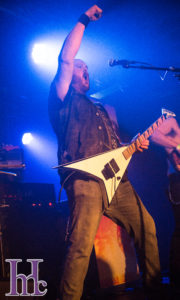 Nothing denotes Amethyst (8) like the pounding waves of a tsunami of shredding riffs bombarded with the ferocity of a hammer and anvil in Valhalla set of percussions. This is what they bring, this is what they brought again and on a night of festivities for the Manchester quartet as they celebrated the release of their debut album From the Fire which was released on the night. Opening with ‘From the Fire’ James Schofield dominated the front stage with his presence; the shreds came thick and fast with a ferocious overlay of percussion from Aaron Youd who produced an incredible set. Although there was a bit too much emphasis placed on the guitars in the opening couple of tracks which unfortunately drowned out the vocals more than they should have, Amethyst never fail to entertain; the thrash metal sound is brought into the 21st century with modern groove, heavy bass lines and high-octane solos.

The influences of Machine Head and Anthrax can be heard clearly in the tight chords and pristine bass lines; the throat ripping vocals screamed out with the roar of Godzilla an yet somehow James still manages to keep his vocal chords in good shape and not rip them apart. It’s the combination of epicness and shredability that keeps us infatuated with Amethyst and it’s not surprising to see them 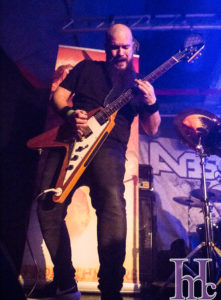 have an ever-growing fan base. Although it was only a short set, Amethyst still managed to turn Sound Control into a mosh pit, especially with fan favourites ‘Retribution’ and ‘Never Say Die’; this is looking to be a good end to the year for the Manchester lot and a good start to next year. 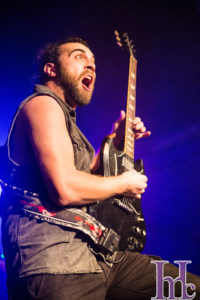 The night was all about the main act, Absolva (10); opening with the enigmatic ‘Life on the Edge’ from their latest album Defiance, the room shot to life after the breather from Amethyst. It was a blistering of shreds and percussions an incredible solo work and it was relentless; they were on fire, the best they’ve been for many a year and that says something. The opening was a triple whammy as the opening three tracks bled so easily into each other with no break, it was a sea of frenzied movement in the crowd as they moshed to the hearts content. Luke Appleton (Iced Earth) was in his element, contributing to vocals and having the time of his life; his contribution to the twin lead that was missing during the second album Anthems of the Dead, but was reborn again with Never a Good Day to Die and now the bombastic Defiance. However, it was all about his little big brother Chris Appleton; one of the best young guitarists in the UK, if not the world. His ability to shred like Alexi “Wildchild” Laiho is second to none and this was on display throughout the set; the entertainment he gave the audience with his facial expressions and showmanship is something you don’t learn, it’s pure raw natural talent.

Of course it wouldn’t be the same without the title track of their latest album ‘Defiance’ which came in the first 3rd; Chris’s vocals 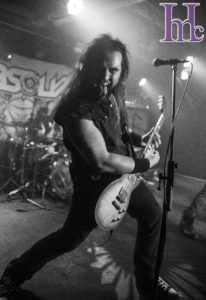 were on show here, roaring with his NWOBHM tone that was

synonymous to the era of Saxon, Iron Maiden and Anvil. The backing vocals of Luke and bassist Karl Schramm really sold it all as well, it wasn’t a new dynamic, but it was more prominent on the night and it definitely gave a new lease of life to the older material that helped it blend so brilliantly with the Defiance soundtrack. ‘From Beyond the Light’ still produced the jaw dropping twin lead “solo” work that leaves you gasping for breath; Chris and Luke looked like guitar Gods as the pummelled the living daylights out of the strings to pull off the instrumental aspect of the song.

Dedicated to Wizz “Wizzard” Beauprez, ‘Reflection’ showed off Luke’s lead vocal capacity and his Iced Earth warble habit kicks in with perfection, thanks to his bass playing capacity with the American band; the set continued with panache as Chris showed off his Steve Vai impressions as an intro to ‘Only When it’s Over’, which showed off their softer side to their repertoire. Chris and co. were born for the stage, their presence and electrifying chemistry makes Absolva one of the best bands live at present; forget the big guns, this is where you see the true raw energy that makes metal music what it is today and Absolva are right at the top of the pecking order. It was all too much to take in, the set was like a ‘Best of’ of Absolva all in one show, it was impossible to pick out what was the best or what took 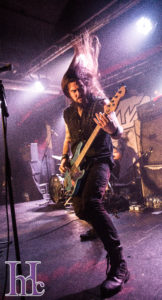 the breath away because it was all there, this was the best of the best and the quartet somehow made them better. The “animal” that is Martin McNee blitzed into an audacious drum solo in the middle of ‘No One Escapes’ to a rapturous applause and comradery from the band when they went off and on the stage. This was a show stopper a show and the evening wouldn’t be the same without the massive ‘Flames of Justice’ and the thunderous ‘Code Red’ but that wasn’t the end of the show, oh no, this was their home town and more had to be done; ending the night with ‘All Alone’ and ‘Taste the Blood’ to an incredible noise from the crowd wanting more and more and more and with Absolva in this mood, who could blame them. 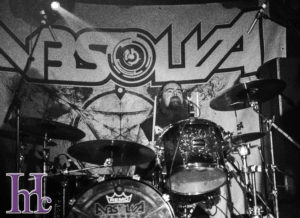 TRAGUL – The Tree of Life – ft. members from Flotsam And Jetsam