Legendary New York thrashers Anthrax have announced that they will be re-issuing albums ‘We’ve Come For You All’ and ‘The Greater Of Two Evils’, on 22nd December via Nuclear Blast.

The two albums will be available for purchase via CD in one package, and also available via limited edition gatefold vinyl as separate pieces.

‘We’ve Come For You All’ was originally released in 2003 and was their 9th studio album. It was the last studio album featuring vocalist John Bush and the first to feature Rob Caggiano on lead guitar. Produced by Rob Caggiano, it’s a heavy and dynamic record that speaks to die-hard metal fans as much as rock and alternative audiences. The Who vocalist Roger Daltrey and Pantera guitarist Dimebag Darrell made guest appearances on the album. The cover art was designed by comic book artist Alex Ross.

‘The Greater Of Two Evils’ is a compilation record originally released in 2004. The album is made up of fourteen songs from the early era of Anthrax that were first released between 1984 and 1990, originally sung by Neil Turbin and Joey Belladonna. The tracks were re-recorded with John Bush on vocals. The tracks were originally selected via a fan vote which was held on the Anthrax website – the band received thousands of votes from all around the world. The artwork for ‘The Greater Of Two Evils’ was done by the infamous Shepard Fairey.

The tracklistings read as follows: 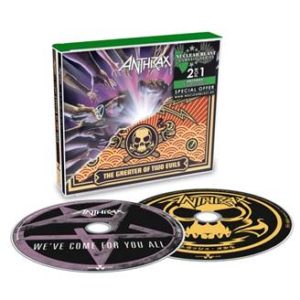 4.Refuse To Be Denied

6.Any Place But Here

11.Taking The Music Back

13.Think About An End

3.Caught In A Mosh

6.Keep It In The Family

11.Belly Of The Beast 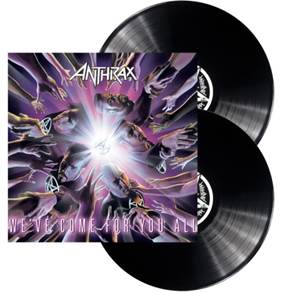 We’ve Come For You All’

4.Refuse To Be Denied

2.Any Place But Here

4.Taking The Music Back

2.Think About An End

3.We’ve Come For You All 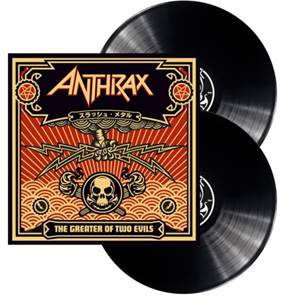 ‘The Greater Of Two Evils’

3.Caught In A Mosh

1.Keep It In The Family

2.Belly Of The Beast

ANTHRAX isn’t your average band. Formed in New York in 1981, the group that would go on to sell over ten million records and become the living embodiment of America’s hi-top wearing, riff-spitting, ear-thrashing answer to the New Wave Of British Heavy Metal has undergone not one, but two complete eras – but that isn’t their real achievement. More than the group who let a fledgling METALLICA crash on their studio floor in 1983, who became a lightning rod for geekdom by immortalising Judge Dredd with ‘I Am The Law’ in 1987, who enthusiastically raised a middle finger to the critics and unimaginative fans alike by collaborating with rappers PUBLIC ENEMY in 1991, and who – in 2011 with the release of ‘Worship Music’ – proved that classic albums aren’t a bygone concept, the story of ANTHRAX is one of gritty determination in the face of outrageous odds.

The liveliest fourth of the Big Four, they’re arguably the only member of that legendary fraternity who’ve kept their eyes so firmly focused forward and who’ve so consistently delivered the goods, both on stage and in the studio. Ironically, it was on stage alongside those immortal co-conspirators where the story of ANTHRAX’s 11th studio record began. Seeing their names in lights next to SLAYER, MEGADETH, and METALLICA had a catalysing effect on the band weary from years of toil and changing times. According to bassist Frank Bello, it wasn’t just a potent reminder of what they did back in the 80s, but also of how far they’ve come.

Their latest studio album ‘For All Kings’ was released in in early 2017 via Nuclear Blast.

You can purchase ‘For All Kings’ here: http://amzn.to/2A12zMz