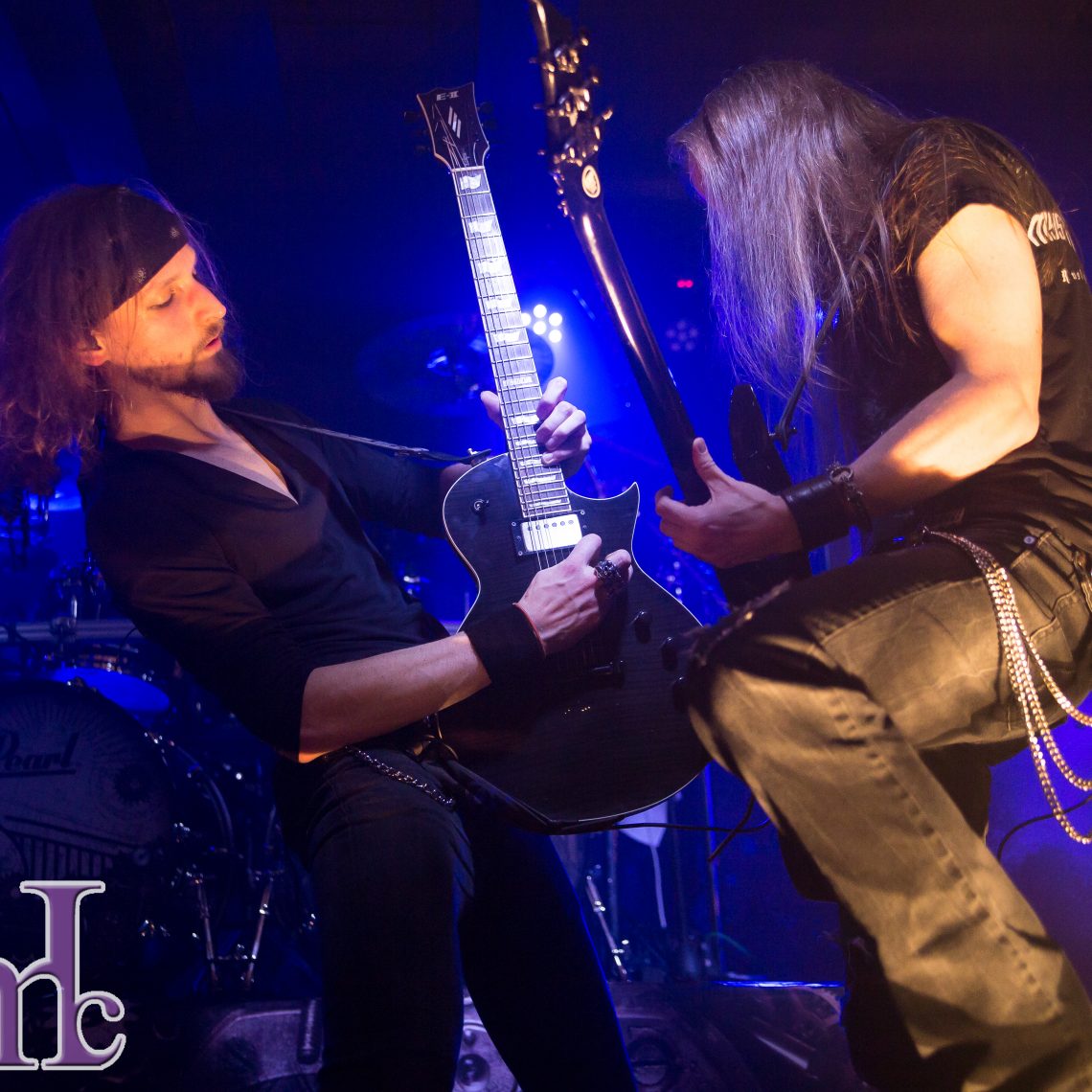 There has been a lot of controversy surrounding Xandria and the departure of Dianne van Giersbergen (Ex-Libris); what makes matters worse for them is the statements that are coming out of the woodwork from past members including the iconic Lisa Middelhauve addressing her ex-husband Nils departure and of course Manuella Kraller (Valkea Valo) both showing similarities for their departures to Dianne’s. Like it or not, Xandria can’t escape this controversy and as a result new session’s vocalist Aeva Maurelle (Aeverium) has stepped into the viper’s nest of fans and critics alike. Manchester is their final leg of their UK tour before heading back into Europe once more; it’s the upstart Rebellion Rock Bar that played host to the German outfit with the support of the promising Metaprism that has joined them for the UK leg. 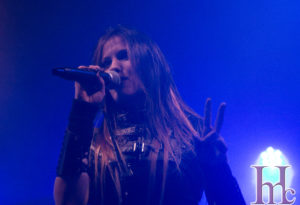 The opening act was a band that I had seen come through the battle of the unsigned bands way back when, when they entertained and won the battle of the New Blood stage at Bloodstock Open Air; their prize has allowed them to build a fan base outside of the UK at Wacken Open Air and a return to Bloodstock Open Air the following year to plat the Sophie stage to a packed-out arena. Metaprism (9) showed their class once again here at Rebellion Rock Bar; they took the stage and swallowed it as the sextet dominated the atmosphere of the venue. The Angel and the daemon met in a dual vocal melody that turned Metaprism into a force to be reckoned with in the metal scene. The ferocious roars and melodic counter creates the resonance of Mother Earth’s fury and her beauty all in one package. Opening with ‘Reload’ the huge riffs ripped out with the ferocity of a perfect storm; making use of every trick in the book, from the blistering bass lines to the thunderous percussions, they produced a sublime amalgamation of sound that was soaked up by the gathered crowd. 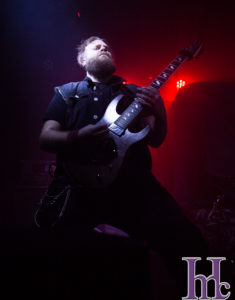 Though easily mistaken as a goth or symphonic metal outfit, Metaprism is far more than the sum of their parts; producing elements of metalcore screams and blistering beats as well as melodic death metal vibes that shred through their sound. They are an enigma that can’t be pigeonholed, and they make sure of it. The chorus harmonies of both Theresa Smith and Joey Draper brought back memories of seeing Lacuna Coil, blending perfectly together in a beauty and the beast menagerie. The bruising riffs were so punchy it felt like the addictive aspect of getting a tattoo; the percussion felt like the ground would crack open and swallow us whole with the sheer weight of bass and sub-kick trigger that permeates such tracks as ‘Catharsis’, ‘Nebula’ and new track ‘Unleash the Fire’. I was electric, they could do nothing wrong as the audience looked on in awe with stunned grins on their faces; once again Metaprism showed that they really are the future of the British metal scene. 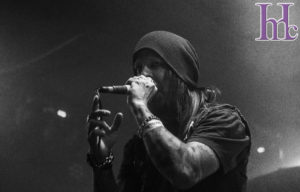 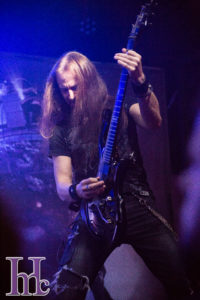 The stage was set with the unveiling on the massive drum kit and the placements of side props for the main act Xandria (8) to strut their stuff. The samples struck out as the opening ‘Where the Heart is Home’ was greeted with cheers and applause from the gathering throng. The band had gathered to each side of the stage and entering stage left came Aeva Maurelle, staking to the centre of the stage to belt out the notes of Xandria’s setlist. From the moment the guitars kicked in the symphonic samples appeared to be drowned out by the guitar shred, these samples being key to the sound Xandria, seemed to pull away from the music. Although this dissipated over the time during the set, you could not help but notice that it had become less than background noise to the point of straining to hear them properly. The set continued with a great array of past and present, throughout Aeva’s voice was sublime, it reached all the heights necessary to accomplish the more operatic aspects of the latter half of Xandria’s catalogue. However, it was her ability to produce the subtle and haunting melodies of Lisa Middelhauve’s back catalogue of Xandria that Aeva beautifully respected with her softer tone and less of the power-house soprano voice needed for the later material. 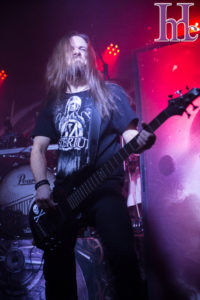 Xandria was loving the attention and that helped with the creation of the audacious solo work of Marco Heubaum throughout the set, especially in with ‘Call of Destiny’ and ‘Forsaken’. In their element, they were tearing through the set but the test came with the legendary ‘Ravenheart’ and it has to be said, Aeva pulled it off brilliantly, granted there were moments of over play with soprano vocals but the overall vibe was respected and showed her class. If there was one thing that made you frown was Aeva’s presence on stage, at times she looked lost up there, not too sure what to do, almost like she was expecting something to happen; this could well be her comfort of being a dual act with Aeverium but who knows. Continuing to pour through the set, the drumming work of Gerit Lamm beat you down with a giant stick, then beat you some more for good measure; his composure was ridiculous, making it look so effortless, nonchalantly striking the skins as if it was nothing to him. As the songs continued to rain down on us, the crowd became more animated, with ‘Death to the Holy’ making people weak at the knees and heavy on the moshing. Of course, it was the likes of ‘We Are Murderers (We All)’ and really riled up the throng into a frenzy, each and all screaming the chorus back at the quintet. 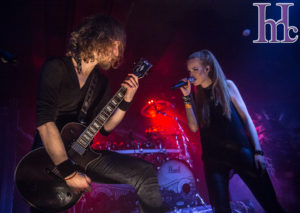 Aeva’s passion seemed lacking at times, again that weird aspect of her not being too sure what to do when the solos work burst; overall though, she performed admirably and considering like bassist Steve Wussow had stated in the show that she “saved their asses” for the remainder of the show, you have to give the band and her credit for powering through the tough time and learning such complex songs in a short period. Putting it into retrospect was Aeva’s heartfelt comment on how she got into symphonic metal and create her own band was because of Xandria; it attested to the influence they had on their fans and that bands coming through the modern scene have Xandria to thank for their creation. It all ended with the incredible ‘Valentine’ much to the joy of some who tried their best to create a mosh pit but with thwarted by the fact that no-one really wanted to and wer too busy banging their heads to the finale of the evening. Overall, Xandria put in a great performance, and Aeva felt like a good fit; none of the gathered crowd appeared to show any misgivings, instead giving the band the benefit of the doubt and just enjoying the class act that was on show. I tell you what though, I can’t wait to see what Aeverium is like.