UK metallers ANTI CLONE will embark on a European support tour in November with headliner SKINDRED. Pulling from a plethora of areas from Marilyn Manson and Slipknot, to Mudvayne and Tool, ANTI CLONE lay down a captivating blend of hard-hitting cutting metal laced with a biting industrial edge. The stage is now set for ANTI CLONE to truly soar. A video teaser for the tour can be viewed here:

The dates are as follows:

Two video teaser’s for the upcoming video “Take This Pill” can be viewed here: 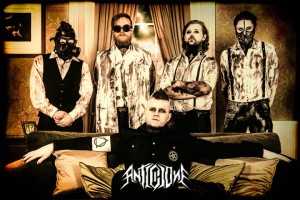 Bursting out of Boston, Lincolnshire and originally formed in 2011, ANTI CLONE had a turbulent start due to personnel changeovers, however they finally solidified their line-up with brothers Peter Moore (Lead vocals) and Drew Moore (Drums & Programming), pairing with fellow brothers Conor Richardson (Guitar) and Liam Richardson (Guitar) and Fraser Burch (Bass) rounding up the unit. The five-some soon forged a reputation in their local area for commanding live performances rammed with blistering energy and ferocious riffs.

Bush – Man on the Run

Infiltrator to release a CASETETTE TAPE