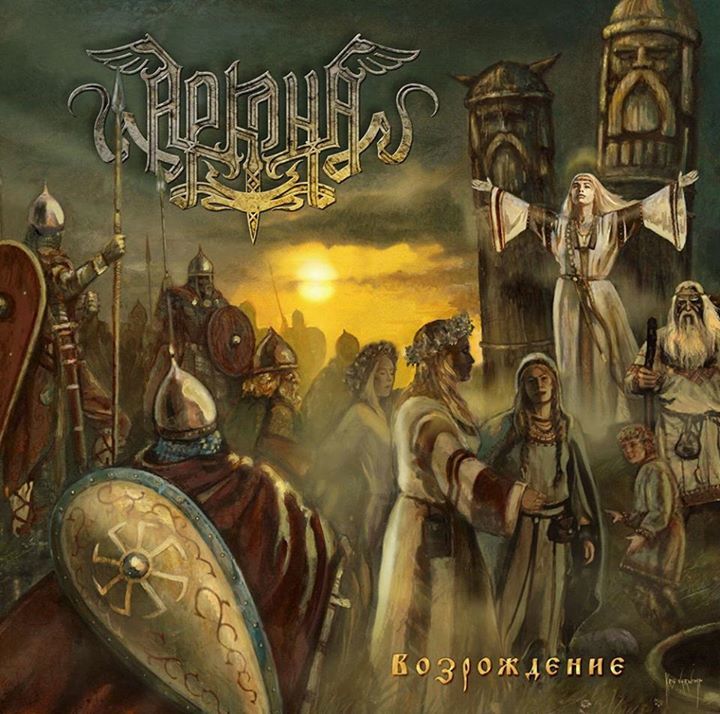 All About The Rock are incredibly proud to present the new track from Russian pagan metal masters Arkona! Pod Mechami is the first single to be released from their re-recorded debut Vozrozhdenie (Возрождение). Vozrozhdenie was originally released in 2004 and firmly placed both Arkona and their mother country on the pagan metal map. Frontwoman Masha`s powerful performance plus Slavic mysticism and varied songwriting turned the first release (which means “revival” in English) of young Arkona into a success and the beginning of a remarkable career. The band has now re-recorded Vozrozhdenie and not only revisits its roots – it lets those old songs shine with a massive production and new instrumental skills!

Arkona has this to say:
“Friends, we would like to present you the song Pod Mechami from our re-recorded album Vozrozhdenie! Vozrozhdenie will be released on November 11th in a super fat digibook with beautiful illustrations of “Pagan artist” Kris Verwimp! It can be ordered right now at the Napalm Records online store!

Initially, the album Vozrozhdenie was planned as an album with 9 songs, from the repertoire of the first line-up of Arkona. Pod Mechami, “K domu Svaroga and Zov Predkov were created by Masha in the summer of 2003, when all the other bandmembers had left the band. Pod Mechami was planned for a project with the band members of Pagan Reign, but, for some forgotten reasons this cooperation never came to fruition. Later, this song was moved to the debut album and became a track with guest participation of Alexei Agafonov, of Butterfly Temple.

The new version of the song is perhaps the closest to the vision Masha had when composing it in 2003, for several reasons. First of all, Masha handled all of the vocal duties, with the exception of the spoken passages, which were done by guitarist Sergei. Secondly, the presence of the classical guitar parts which were written back in the days for Dmitriy “Vetrodar” (Pagan Reign, Tverd), but he never recorded them. Now it was recorded by Svarga guitarist Alexander Strelnikov, and we want to send many thanks to him! The third reason: the new version has the original arrangement, which Masha created more than 13 years ago!

Masha’s original vision for the song, combined with the gentle sound of the sopilka and flute by Vladimir Volk, and furious drums by Andrey Ishchenko, has given a new life to the old song.