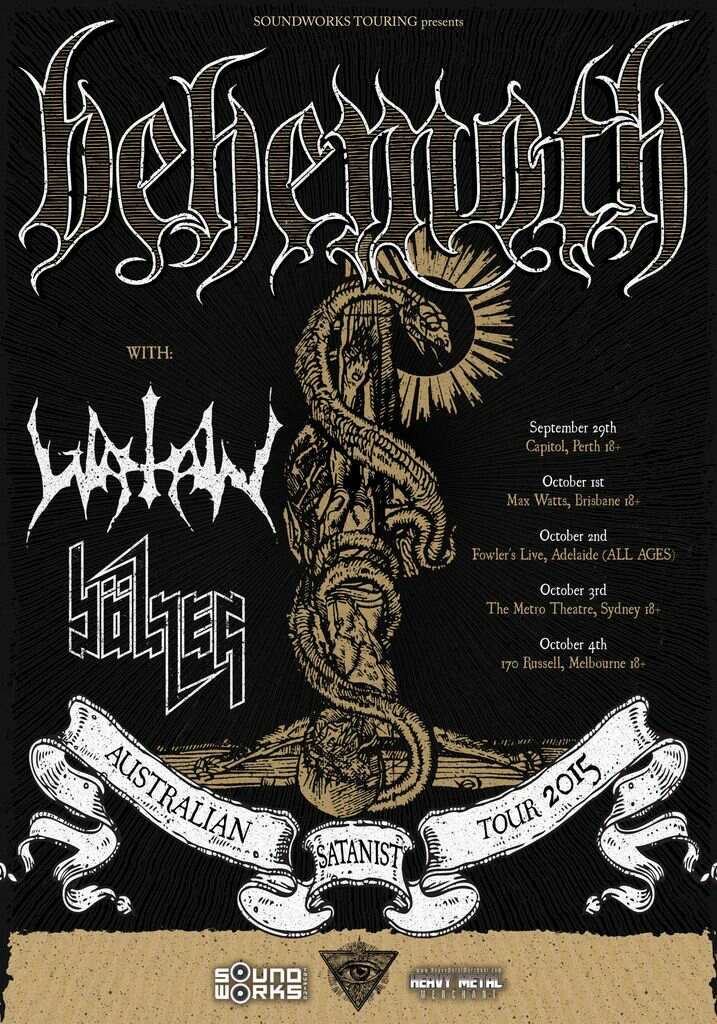 It is a warm evening in Brisbane, the sun is shining, the beer is flowing, and there is a distinct lack of burning churches in the area – it does not feel like a night for black metal, but Max Watt’s is in for a very real, very Satanic shock tonight. The doors open not long after sundown, and the almost-reasonably priced drink is flowing almost immediately. A horde of black clad, long haired metal fans swarm to the merch stands as soon as the doors open, and it’s clear every band will have made a killing in merch alone tonight.

It doesn’t take long for the venue to fill up, and very quickly after the doors open Bolzer [6 out of 10] begin their set. Just the frontman and the drummer, Bolzer rip through a set that is pure black metal. The Swiss pair manage to get more than a few heads in the crowd banging along, however minus the odd guitar solo and the use of some very well executed clean vocals, they were unfortunately largely forgettable – not bad, just not great either. After a quick changeover, Watain [8 out of 10] take to the stage and promptly decimate the crowd. For a black metal band, the riffs spewing forth from these talented Swedes carry a very infectious groove. Storm of the Antichrist and Reaping Death draw the crowd almost to the point of frenzy, and the band rip through such fan favourites with ease and incredibly tight showmanship. Watain earn extra bonus points here for their stage show as well, complete with snakes and the customary blood spitting.

But once Watain finish their set, and the stage is cleared, we wait for the main event. Behemoth [10 out of 10] take the stage and after an incredibly atmospheric intro involving frontman Nergal and some fire. Blow Your Trumpets, Gabriel comes forth from the stage and is met with a sea of headbanging, fist pumping and raised devil horns. As …Gabriel finishes, they storm into another favourite from the critically acclaimed The Satanist (which if you still don’t own by now you must rectify immediately!), Ora Pro Nobis, Lucifer, and the crowd erupts with a new found energy. The Polish giants blister through classic after classic with flawless execution, every word Nergal growls into the microphone growled back by 1,200 fanatics. While the spotlight is very much on Nergal, he does not for a second overshadow the talents of Orion, Seth and Inferno, each man getting his moment to shine and clearly showcase his incredible skill – and whatever your thoughts may be on Behemoth’s brand of blackened death metal, there is no denying talent and fantastic musicianship oozes from every pore of these men.

Conquer All. Slaves Shall Serve. Ov Fire and the Void. At the Left Hand Ov God. As a set packed with these and many more fan favourites draws to a close, the crowd is left feeling somewhat cheated at the omission of one song in particularly, and a chant demanding another song echoes. Our wish is swiftly granted, and the men in black and corpse-paint take to the stage to blaze through a truly perfect O Father, O Satan, O Sun. Seeing Behemoth play live is not like attending just another gig, it is a Black Mass and anyone that passes up the chance to see them has incredibly questionable morals and is no friend of mine.

Buy their new album The Satanist if you haven’t already, and be sure to check out what is guaranteed to be a truly incredible set at Bloodstock next year!