Progressive death metal band BLACK CROWN INITIATE have just announced the Doom Escape Tour 2021. The band’s U.S. headlining tour, which features support slots from Inferi and Arkaik, starts on September 30th in Reading, PA and wraps on October 17th in Manchester, NH, making stops in massive markets along the way, such as Brooklyn, Nashville, and Atlanta. Tickets are available to purchase now, HERE.

“It’s obviously been a long time coming for us all, and we couldn’t be more stoked to play the songs from “Violent Portraits of Doomed Escape” live. To be able to do that with our brothers in Inferi and Arkaik is the icing on the cake. See you all on the Doomed Escape Tour,” states BLACK CROWN INITIATE guitarist Andy Thomas.

BLACK CROWN INITIATE will be touring in support of their 2020 release, Portraits of the Doomed Escape (Century Media Records), which was recorded at Think Loud Studios by Carson Slovak and Grant McFarland (Rivers Of Nihil, August Burns Red, Lorna Shore). The album is available to purchase and stream, HERE.

Having released two critically hailed, fan-worshipped works of progressive death metal, 2014’s Wreckage of Stars and its 2016 follow-up Selves We Cannot Forgive, BLACK CROWN INITIATE have found a new label home with Century Media. Formed in Reading, Pennsylvania in 2012, BLACK CROWN INITIATE have created a stir that’s stretched far beyond the underground with a sound that is at once sweeping, chaotic and epic in scope and ambition. The release of Violent Portraits of Doomed Escape, which was featured on numerous “Best Albums Of 2020” lists,was no exception to the band’s impressive pedigree. 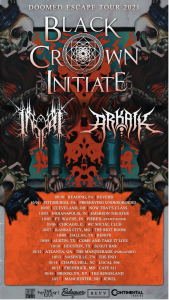