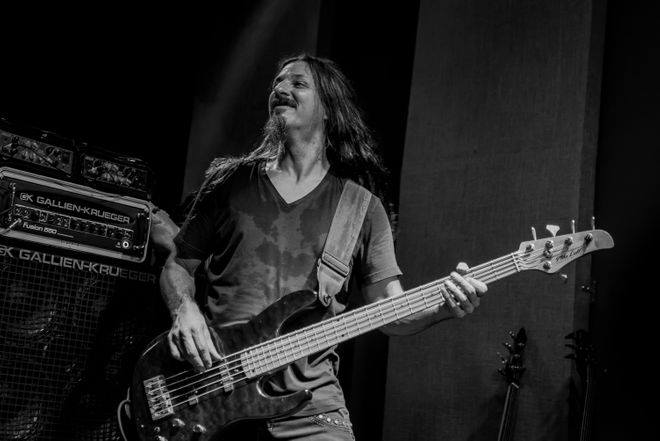 Following on from his incredible work playing bass alongside Joe Satriani, in extreme metal project Dethklok and part of virtuosic trio Aristocrats, Bryan Beller is gearing up to release his debut solo album Scenes From The Flood. The 88-minute, 18 track double album is an ambitious project full of skill, genres and passion. Be on the lookout for our review of the album on AATR in the coming days! 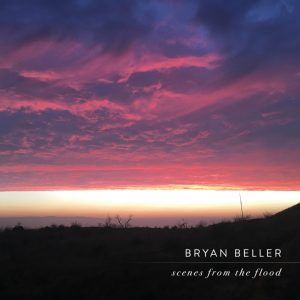 Scenes From The Flood is designed to be experienced in one, uninterrupted go. What made you take on such an ambitious project?

This is just what the music and the art and the work wanted to be. It’s probably because I’ve always loved and appreciated the double concept album structure ever since I got my very first album when I was 9 years old, which was Pink Floyd, “The Wall”.

I think, perhaps, I always wanted to do something like this, and it just took a while for me to a) admit it to myself; b) carve out the time in my life to make it happen. But in the end, I had 18 songs and 88 minutes of music rumbling around in my head, and I had to get it out somehow. This is how I did it.

Its 88-minute runtime could be a bit daunting to some. Which one track do you think best sums up the album as a whole?

That’s just an impossible question! Maybe the best way is to identify certain styles inside the album. If you’re into long-form progressive epic type songs, then I think “Always Worth It”, “The Storm” and “World Class” would all be candidates for one-song glory. For guitar aficionados, perhaps “Volunteer State” because that’s such a Joe Satriani showcase, or maybe “Lookout Mountain” if you’re into acoustic guitar because Mike Dawes plays that so beautifully.

Metal fans will definitely gravitate towards “The Storm” and “Steiner In Ellipses”. And for those who appreciate subtle, haunting soundscapes, the pseudo-title-track “The Flood” is representative of many of the albums’ themes, and features an amazing performance by Janet Feder. I realize I didn’t answer your question correctly. ¯\_(ツ)_/¯

My favorite individual track on the album is ‘Steiner In Ellipses’. Do you have a favorite?

No, that would be like asking “which one of your children do you love the most?”. Even if you had an answer you would never tell anyone.

You state The Wall as a big influence on your writing, and the thematic unity on that album is probably my favorite element of it- what is your favourite piece of thematic unity on SFTF?
I don’t mean to dodge this question but I don’t want to give the game away. I think that kind of stuff is best left for the listener to discover on their own. No spoilers, right?

Are there any themes that return with subtlety that a listener might not pick up on during their first listen?

Absolutely. I think it would probably take 3 for 4 listens to come close to getting them all. And that’s fine – not everyone will process it that way anyway. The layers are there for those who want to dig deeper. For those who just want to listen to it as music without going there, that’s fine too. But it will reward repeated listens for sure. Or, at least, that’s what I hope.

How long ago did you start writing/recording the album?

I heard the first melodies and grooves for this album all the way back in 2013. But I was touring so constantly that I didn’t start making song demos until 2017, when I finally got off the road and took the time needed to make it happen. Then it was tracked and mixed in 2018 and halfway into 2019.

Do you use a variety of bass guitars or is there a specific bass you use for all of your recording?

I was pretty much reaching for any weapon at hand when I was tracking bass for this album. There was a Spector Alex Webster Signature, a Mike Lull Modern 5, a Spector Forte, a Mike Lull P/J 5, and even a Frankenstein Ibanez import that I essentially modified to be a Music Man. I was really more concerned with the guitar sounds and keyboard textures…which may sound strange since I’m a bassist, but that’s how the album came together for me. I just hired myself as a session bassist to make all of these songs work as best I could.

How did your work with The Aristocrats (and the influence of Guthrie and Marco) impact your writing on Scenes From The Flood?

Well, it did and it didn’t. For The Aristocrats I really try and keep the writing to something that can be performed by a live trio. That implies certain arrangement limitations. So in a way, writing for the trio for a few years left me wanting to get back into the “big arrangement” game. So you could say that The Aristocrats inspired me to go the other way with most of this album. I think it’s a good balance, the two concepts.

I went to see Joe Satriani at the Indigo2 in London about five or six years ago and remember realising that I was watching the bassist more than Joe himself. A few years later I realised that bassist was you! What do you think it is that draws people to the bass guitar even when a crazy guitar solo is happening two metres away?

Obviously playing in Dethklok has meant you’re often associated with extreme metal. Did you ever consider working some guttural, screamed vocals into Scenes From The Flood?

The only reason I would do that is if a song that belonged on this album was asking for it. I really try and honour the song first. So if I’m ever trying to “work something in” that it’s possible I’ve lost the plot somehow, and I need to check back in with the context and meaning of the song itself. I’m not sure “BB does Corpsegrinder” would really fit on this album anyway!

Which bands stand out most to you from the extreme metal world?

I’ve always been a big Strapping Young Lad fan, and their album Alien has been a huge influence on me. I also dig Gojira a lot. Is that extreme metal? I don’t want to commit a metal sub-genre fail here.

Which progressive rock bands gave you the most influence on the album?
Pink Floyd and Yes are both huge influences on Scenes From The Flood. For Pink Floyd, it’s not just about The Wall – I feel like every album from Dark Side Of The Moon on really told a story, and left you feeling like you entered an entire world that they built just for you. And with Yes, there’s a way that they layered their arrangements, and used the combination of the classical music progressions and with Steve Howe’s twang to create something majestic and unique.

Did anything in particular impact your decision to release an album with many shorter tracks rather than fewer longer ones?

I really didn’t think of it that way. The songs just showed up for me how they showed up, and then the sequence told me when the listener might need a breather. 88 minutes is a long time, and I’m not sure eight songs, eleven minutes each, really would have been the best way to do about it.

Do you have ideas for a follow up album? A sequel perhaps?

As far as a sequel, God no! It took everything I had for over three years just to get this into the shape I wanted. I think my next solo album, if I did another one, would be a significant departure from this concept, though I have no idea what that would be at this point.

Are you planning on taking the album out on tour at any point?

Do I want to play this album live, as a full album show? Of course I do. Do I have plans for that right now? No, not yet. It will take some time to put together, both in my mind and then in real life. The thing is, I don’t think that Scenes From The Flood is the kind of album that you could just go onstage and play with no production, like a raw concert. It really needs and wants a light show, video screens, and the atmospherics that would make the presentation of a story like this an unforgettable experience. That’s what I’d want to present.

So, I might take a week off after the album comes out before thinking too hard about that. 😉