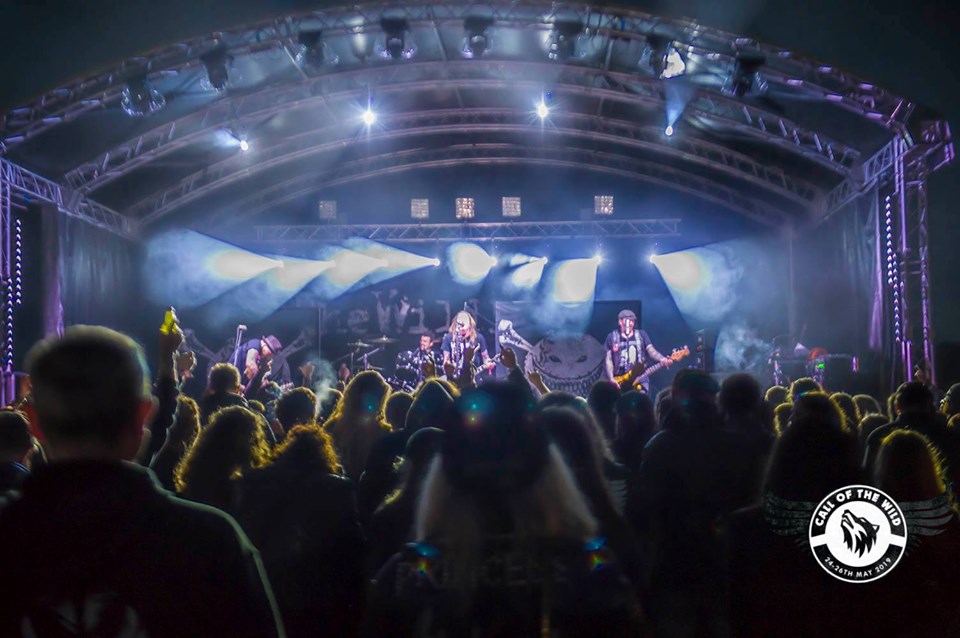 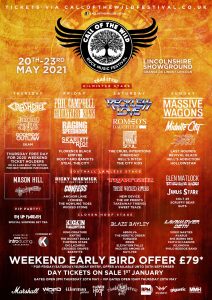 CALL OF THE WILD FESTIVAL returns to the Lincolnshire Showground on the 20th May 2021. Organisers have included an additional day as a big thank you to everyone who has stuck by them through the whole pandemic, and regardless of losing the event for 2020, have retained their tickets and helped support the festival through one of the most challenging times ever known within the music industry.

The addition of Thursday is a free day to all who already had tickets for 2020, but no one needs to miss out on this fantastic extra day of bands as there is also now a bolt on option to purchase.

Organisers are absolutely thrilled to confirm a hugely respected and prolific band for the Thursday main stage headline; CRASHDÏET will bring their biggest show to the Kilmister Stage and it will be an explosive start to a huge weekend if rock music.

It has been the motivational “catchphrase” for the Swedish boys in CRASHDÏET ever since they started out back in the beginning of 2000. They’ve clearly gone through turbulence a number of times in their career, with deaths, line-up changes and a history of abuse that would make Mötley Crüe’s “The Dirt” sound like a children’s book. However, the boys have become known for picking up the pieces and returning to the scene, every time they crash. Their undeniable flirt with the 80s big arena rock bands like Guns N’ Roses, Kiss, Skid Row etc., combined with a notable element of punk, has made them a significant name in the revival of the sleaze and glam (or hair metal) genre. CRASHDÏET released their critically acclaimed debut album “Rest In Sleaze” in the fall of 2005 through Universal Music, giving them a spring of success in their home country. But shortly after, in January of 2006, their frontman and founder Dave Lepard, was found dead in his home. The surviving members have carried on the torch ever since, recruiting new frontmen, touring the world and releasing studio albums for their widespread fans. In September of 2019 they released their fifth studio album, RUST.

There have been many challenges throughout 2020 & one of the big ones is trying to rebuild a festival and also include many of the acts that were already being arranged for the 2021 line up.

Happy to help accommodate MASON HILL to honour one of their rescheduled 2020 shows with THUNDER, organisers have moved the scottish band to Thursday where they will be the first ever band to headline the new SOUTHALL LAWLESS Stage, named in honour and remembrance of two musicians; Nick “Ringo” Southall & Mikey Lawless who lost their brave battles against Cancer.

The Thursday line up is buoyant with some of the strongest bands rising up through the ranks and organisers are delighted to confirm Doomsday Outlaw and Daxx & Roxane to the bill.

If you’ve got a VIP upgrade you’ll be a part of the biggest pre festival drinks party hosted by MOTÖRHEAD BEER & CLOVEN HOOF RUM. There will be three very special live sets from surprise bands, and organisers are keeping tight lipped on just who they will be.

Unable to hold the live finals for the Trailblazer BOTB, judges were forced to refer to their notes and the incredibly difficult situation to decide a winner who they felt earned the position to open the Kilmister stage on Friday and also win a Very Metal Art lyric video as part of the prize.

That honour goes to Sheffield based Steal The City who really did leave every judge at the Blackpool heat with their bottom jaw on the floor.

However, very much part of supporting the development of new bands is to trust their ability to deliver at a higher level, and organisers are pleased to include all finalists; Kilonova, The Philo Beddoe Band & Kaylyde on the festival bill over the weekend.

All tickets are currently on sale from ticketing partners GIGANTIC with a Weekend Earlybird price of only £79 available until 30th September. Options include Payment Plans, Glamping, Hilton Hotel Package & very limited VIP upgrades.