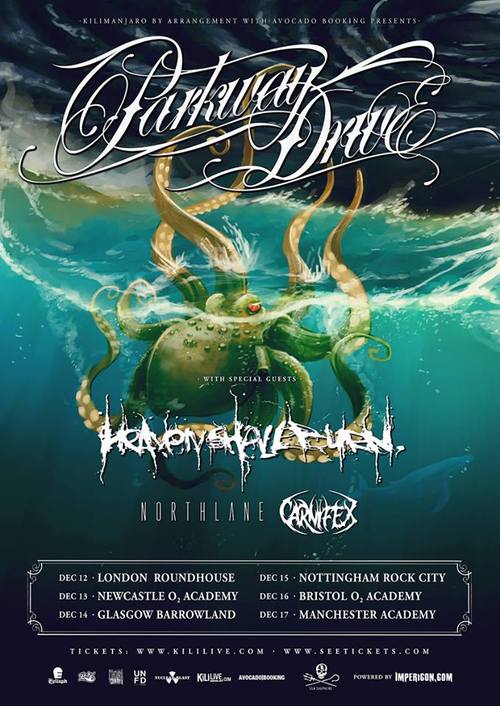 San Diego’s finest modern death-metal 5 piece, CARNIFEX, have just been announced for one killer UK tour this coming December! Supporting one of Australias most successful metal acts, PARKWAY DRIVE, CARNIFEX will be joined by hugely popular Aussie newcomers, NORTHLANE and German extreme metallers – HEAVEN SHALL BURN, making this mighty intercontinental bill surely one of the biggest tours of 2014!

After the huge success of latest studio album, ‘Die Without Hope‘, released earlier this year in March, and their incredible performance at last years Never Say Die tour – this tour has all the boxes ticked to be nothing short of amazing!

Vocalist, Scott Lewis is stoked to be a part of the tour, he comments;

‘In 2008 we visited the UK for the first time as part of the Never Say Die tour with Parkway Drive. To return 6 years later with our friends in Parkway is a true honor. We couldn’t be more excited to share the stage with Heaven Shall Burn and Northlane. This will be one of the biggest nights in metal. You do not want to miss it.‘

Dates are as follows:

Tickets will go on sale on Friday at 9AM GMT

‘Die Without Hope’ was recorded at Audiohammer Studios in Sanford, Florida and produced by the esteemed Mark Lewis. It marked the long awaited return of Carnifex, their fifth full length album containing 10 tracks of crushing metal that no fan of heavy music can deny. They delivered an album that stands as a definitive cornerstone for modern death metal. Since their formation in 2005, Carnifex has proven time and time again that their diehard fan base combined with their DIY work ethic is unmatched. Their performance on the Never Say Die tour, earned them huge praise from the UK Media (9/10 Rock Sound, 8/10 Metal Hammer) with Rock Sound enthusing that their ‘razor sharp heaviness remained off the scale throughout’

A tour not to be missed. Chaos will reign.