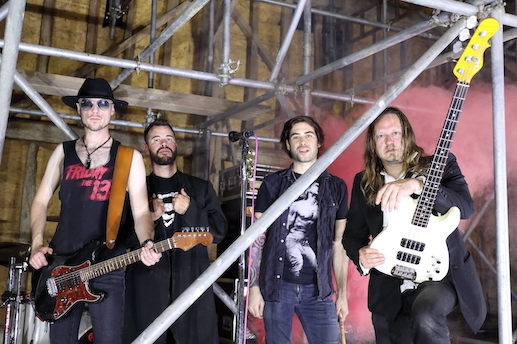 14th July 2022 0 By John Deaux
The video for the new single from Leader of Down entitled “Holloway Motel” is released today via Cleopatra Records. It was shot on location in Los Angeles and England.
Holloway Motel is inspired by the motel of the same name that is situated on the West Hollywood stretch of route 66, almost opposite the iconic bar Barneys Beanery, which was the regular drinking haunt of legends such as Jim Morrison. It was at the “Holloway Motel” that bass player Tim Atkinson and original Leader of Down drummer Steve Clarke used to stay whilst visiting Lemmy for the recording of “Paradise turned into Dust” which was the first single from debut album Cascade into Chaos.
Tim Atkinson (Leader of Down Bass player) “We used to stay there for weeks on end, and it really became somewhat of a second home during that period, and it was just a few steps across the road to Barney’s Beanery where we normally ended up at the end of most days. It seemed only natural to write a song about “Holloway Motel” as the place really holds a special place in my heart and many good times were had there. It was only a short walk up to The Rainbow to see Lemmy, and I always remember when Phil Campbell came over to visit us in our room, and we had really forgotten what a state that our room has got into as we had been there for so long. By that point it looked like a scene from the old BBC series “Tenko”, which was based in a prisoner of war camp but it was a great place and will always live long in my memory and it is a terrible shame that is hasn’t reopened yet after the pandemic”.
“Holloway Motel” is lifted from Leader of Down’s acclaimed second album The Screwtape Letters. Since its release in April the album entered the Amazon Heavy Rock Charts Top 10 and has achieved rave reviews from the press and public alike.
“One of the most exhilarating records I have heard in recent times” – Powerplay Magazine
“This is real rock and roll in the 21st Century” – Music News
The first singles “Hitman” and “The Screwtape Letters” both achieved Top Ten status in the UK iTunes Heavy Metal Chart as well as chart placings in Germany and as far afield as Australia.
Hot on the heels of recent shows in the UK supporting Phil Campbell and the Bastard sons, Leader of Down have already been confirmed for the Hard Rock Hell NWOCR Festival, Call of the Wild Festival, and main support for NWOBHM legends Tank next year with many more dates to be announced including UK and European shows in 2022.
Check into the Holloway Motel, you won’t regret it.
FOLLOW THE BAND
FACEBOOK: