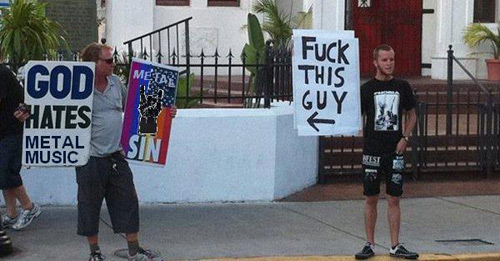 Westboro Baptist Church are at it again with the horrific announcement that the bastards plan to picket the funeral of late Slayer guitarist Jeff Hanneman. Claiming that they will sing their “parody” of Ozzy Osbourne‘s “Crazy Train” “at full voice” during the Slayer guitarist’s funeral.

Jeff Hanneman died at approximately 11:00am on Thursday the 2nd of May near his Southern California home. He was just 49. Hanneman was in an area hospital when he suffered liver failure. Due to a terminal illness called necrotising fasciitis which he is thought to have contracted from a spider bite, 2 years earlier.

Necrotising fasciitis is more commonly known as a flesh eating disease, which is caused by a bacterial infection of the deeper layers of skin and subcutaneous tissues.

“Necrotizing fasciitis is quickly progressing, having greater risk of developing in the immunocompromised due to conditions like diabetes, cancer, etc. It is a severe disease of sudden onset and is usually treated immediately with high doses of intravenous antibiotics.” – Wikipedia 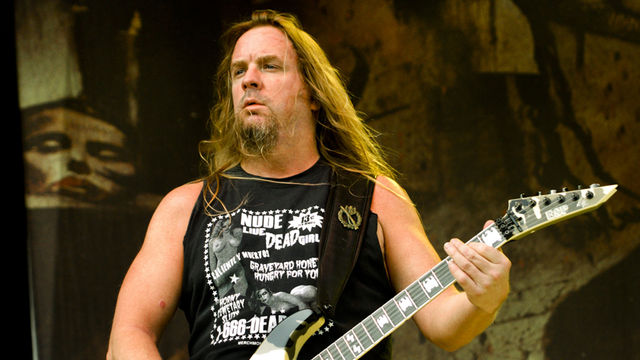 Slayer fans have become outraged by the news, with social media sites like Facebook daring the church to even try to protest at the event, that they might meet their quick demise. The onslaught of Hate for the church has been universal by the metal community.

Westboro Baptist Church — is fringe group of fundamentalist Christians who continues to make headlines around the world for their extreme anti-gay views and outrageous protests at the funerals of U.S. soldiers, regardless of the soldiers actual sexuality. The so called “Church” first used lyrics from the Ozzy song “Crazy Train” at events surrounding a Supreme Court hearing in 2011. Two daughters of the church’s founder used the paraphrased lyrics from the song at the post-Supreme Court hearing press conference in Washington D.C.

Ozzy shows his disgust for the Westboro Bastard Church

Ozzy commented “I am sickened and disgusted by the use of ‘Crazy Train’ to promote messages of hate and evil by a ‘church,’” in response to the news of his song being used by Westboro Baptist Church.

In a June 2010 during an interview on “Rockline”, Ozzy Osbourne slated the Westboro Baptist Church’s protest of Ronnie James Dio’s funeral. “I thought it was in such bad taste that those people had those banners about Ronnie James Dio. That’s disgusting. They say that we’re the anti-christ. Well, what makes them any better?”

The Westboro Baptist Church has even had the audacity to publicise their awful “parody” of “Crazy Train” on YouTube. I have included it for reference, but I really don’t enjoy sharing anything these worthless excuses for human beings have created.

Amazing, that’s how God rolls.
Millions of people, drowning in woe.
Crazy, it’s much too late.
To speak about love, when you brought on is hate.
Crying about your feelings, or your sin, no shame.

You listen to preachers, your leaders are fools.
You’re raping false prophets, who make their own rules.
The base is ascending, to rule and control.
The media sells it, and you pay the toll.

The station goes deceiving, their torment you in flames.
You’re going straight to hell, on a crazy train.

We’ve told you your destruction is imminent.
You should have listen to our words.

Isn’t God’s fury?, That’s forced onto them,
The ruling rebellion, God is made to numb.
Crazy, the pride as you well.
Your birth will be brutal, he will say what is fair!

Other disgusting stuff the Westboro Baptist Church has been up to

The Wall Street Journal describes the Westboro Baptist Church as a “tiny Kansas church who preaches that U.S. deaths in Afghanistan and Iraq are punishment for America’s tolerance of homosexuality and abortion.”

‘You’re Going to Hell,’ ‘Thank God for Dead Soldiers,’ and ‘God Hates You’ are some of Westboro’s favourite slogans to use at their gatherings.

Used with the kind permission of Soul Sanctuary