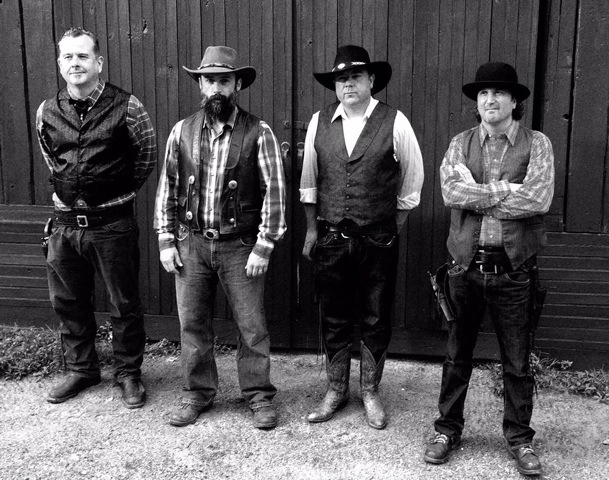 Clutch have released their new video for the song “A Quick Death In Texas”. The video was directed by David Brodsky / MyGoodEye (Papa Roach, In This Moment) and can be viewed at the following locations:

“The video for ‘Quick Death In Texas’ was a lot of fun to make” states front man Neil Fallon.  “Dave Brodsky and his crew did a great job and considering that the whole shoot was done in a single day is astonishing.  The cast at Wild West City are a great  group of folks.  In a world of monster corporate theme parks, Wild West City is a rare gem. I won’t lie, I had a blast playing cowboy for a day, even if it meant getting repeatedly killed, sometimes by desperados, sometimes by trusted bandmates.  Originally, I was going to be drawn-and-quartered, but we didn’t have the budget for four horses.  So we opted for a traditional one-horse-dragging. And Lucky, the painted roan, did a fine job of delivering justice.”
Clutch continues their Psychic Warfare World Tour 2016. The band will be playing festivals and headlining shows throughout Europe and the UK this month before returning to the US to headline tour dates in September/October with Zakk Sabbath and Kyng. In the UK, don’t miss Clutch’s Main Stage set at the Reading & Leeds Festivals over August bank holiday weekend (Reading – Sat 27th Aug, Leeds – Sun 28th Aug).
Psychic Warfare is the latest and eleventh studio effort from Clutch. The disc debuted at No. 11 on the Billboard 200, No. 2 on the Billboard Independent, No. 1 on the Billboard Hard Rock and Billboard Rock charts, and landed in the UK national album chart at a career best No. 20. On Record Store Day this year Clutch released a limited edition numbered etched vinyl 12 inch that included two previously unreleased tracks from the Psychic Warfare sessions:
“Mad Sidewinder” and “Outland Special Clearance”.Psychic Warfare was produced by longtime producer Machine (Lamb Of God, Every Time I Die).
For more  information, contact Kirsten at Cosa Nostra PR on kirsten@cosanostrapr.com.
Facebook: www.facebook.com/clutchband
Instagram: www.instagram.com/clutchofficial
Twitter: www.twitter.com/clutchofficial
Official: www.pro-rock.com
YouTube: www.youtube.com/user/officialclutch
Video Crew: