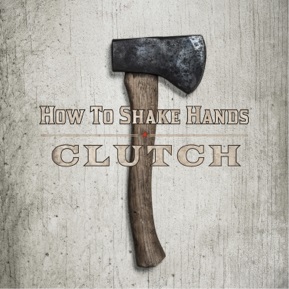 22nd June 2018 0 By John Deaux
Maryland rockers CLUTCH are releasing the second single from their upcoming album Book Of Bad Decisions as an instant gratification track.
iTunes (https://itunes.apple.com/us/album/book-of-bad-decisions/1376829212&amp;app=itunes)
Amazon (https://www.amazon.co.uk/dp/B07D3CQNTT).
Spotify (http://open.spotify.com/album/0uWlwy6wHD7tGV3FfiVBF0)
In addition, a very limited 7” Picture Disc in a transparent PVC pocket will hit stores today.
“How To Shake Hands” is on the blue side and first single “Gimme The Keys” on the reverse, green side.

Clutch’s song “How to Shake Hands” traces its lineage back to Ry Cooder and John Lee Hooker via the song “John Lee Hooker for President”.  In that song Ry Cooder impersonates JLH giving a stump speech on what will happen when he becomes President.  Clutch’s original idea of covering the Ry Cooder song was soon abandoned as vocalist Neil Fallon said he couldn’t do the song justice. Instead, Neil put his own lyrics in the style of Ry Cooder/JLH to a new Clutch song which ended up becoming the fast-paced “How to Shake Hands”.
Each of the single releases from Book of Bad Decisions is accompanied by a Spotify playlist put together by one of the band members. In this instance guitarist Tim Sult is responsible for surrounding “How To Shake Hands” with other songs to his liking:  “Since Neil mentioned Jimi Hendrix and Bill Hicks in ‘How To Shake Hands’, I decided to make a playlist including both. Classic guitar playing meets classic comedy. What could go wrong?”
UK DATES ON SALE NOW:
Tue 18th Dec – BRISTOL O2 Academy
Wed 19th Dec – GLASGOW O2 Academy
Thu 20th Dec – MANCHESTER Academy
Fri 21st Dec – LONDON O2 Academy Brixton
Sat 22nd Dec – BIRMINGHAM O2 Academy