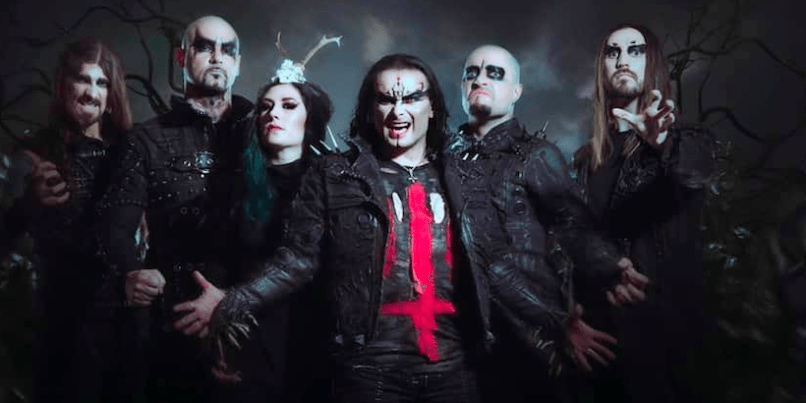 Cradle Of Filth have been producing Gothic, blackened death metal for 25 years. In the process, they’ve released some exceptional albums and played hundreds of corpse paint ridden shows. This one sees arguably the most exceptional of these albums performed in all its blood-drenched glory: Cruelty And The Beast.

The production of the album itself is one of the biggest missteps in music, with gloriously aggressive music being torn apart by a tinny drum kit, muddy guitars, laughable keyboard sounds and spoken word vocals that almost couldn’t sound worse if they tried. Luckily, the album is finally (after 21 years) being remastered, and from the re-released single of ‘Lustmord and Wargasm’, it has been completely transformed. Seeing the album played front to back should be an incredible experience to match the quality of the remastered release.

And it was. After an interesting choice to open the show with a metal-tinged DJ set and have an (and oh so very annoying) guy dressed like a circus master introduce the sets, the curtain came down and the grand, futuristic stage set was revealed. Cradle Of Filth don’t really do subtlety, so flames were roaring from every corner of the stage while Dani Filth prowled around the stage in his cloak.

The album sounds so much better live that on record, with the power of the guitars crushing every note, the drum kit finally being treated with enough force and the vocals perfectly balanced in the mix. The Palladium were on fine production form tonight. ‘Beneath The Howling Stars’ saw Lindsey Schoolcraft basically rapping, demonstrating a remarkable vocal dexterity, as the next minute she’s belting through some operatic soprano lines.

The theatrics were taken to a higher level even for CoF tonight as they introduced an actress to the stage who I can only assume was playing Countess Bathory herself as she demonically wandered the stage. ‘Bathory Aria’ is not only the best track on the album, but the highlight of the night in all of its 10-minute glory. So far, Dani Filth has favored his searing high pitched screams, but the lower, guttural vocals make a welcome appearance here. Richard Shaw was spinning around like a madman, at one point flames were coming from 12 different places and mosh pits were opening up on the floor. This was very good.

The actress made a return during ‘Portrait Of The Dead Countess’ to give out roses to the audience, before the opening notes of ‘Lustmord And Wargasm’ kicked in with immense similarity to the theme of ‘Requiem For A Dream’.
After powerfully concluding the fantastic album the band wander offstage wordlessly and bring their curtain back down. Apparently the guy sent to hype up the crowd hosted a radio show and played football with Dani Filth, but neither of these things particularly mattered as he was heckled from basically every angle The Palladium was able to offer.

The band returned for a greatest hits set-list with arguably even more vigor than before, with absolutely no energy lost. Dani Filth was climbing up and down his central staircase fully caped once more, and the flames seemed to have taken on a life of their own, pounding out with even more aggression on key beats. Hits like ‘Nymphetamine Fix’ and ‘Heartbreak And Séance’ are perfect, but throwing in my personal favourite ‘Nemesis’ wouldn’t have gone amiss.
One of the main differences between this set and the first is that Dani Filth took some time to chat to the audience. His voice seems to be fighting between keeping up his shouted demeanor, and completely abandoning the Gothic personality his make-up and music suggests to revert back to his conversational British accent.

The rest of the band are on top form, with Schoolcraft’s orchestral keyboard lines providing subtle textures and unique melody lines in equal measure and Richard Shaw and Marek Smerda showing off their ability to shred at choice moments. At the top left of the stage, the only member of the band not costumed and covered in make-up might be their hidden gem. For almost two hours, his legs and arms are powering through incredibly tight, fast blast beats like its easy.

As the set drew to a close, a new level of theatricality came to the stage. Two actresses in nun costumes roamed around looking scared until they were eventually converted. Pretty predictable stuff. Then they both took all of their clothes off. That was where it all went quite strange, and the audience weren’t quite sure how to react themselves. Hopefully it was supposed to be light-hearted and funny, because it was, but if not… questionable.

‘Her Ghost In The Fog’ saw snow-like confetti drop from the ceiling for the entire track, with its surprisingly catchy melodies landing perfectly with this audience. The concluding stabbed chord was completely out of time, but considering every other note of the show was perfect, I can certainly overlook it. Dani Filth made his thank-yous (which are so hard to take seriously when he says stuff like ‘thank you to our amazing crew’ in the demonic death growl he’d been using all night) and ‘From Cradle To Enslave’ brought an exceptional show to a close.

Considering I’d caught CoF at Bloodstock earlier in the year, you’d assume I be used to the power of their live sound. But no. It was still just as raw, impressive and note-perfect, and with the extra production value and longer setlist, this turned into one of the best metal shows I’ve ever been to.

Be on the lookout for the remastered edition of Cruelty And The Beast when it releases this November.
SET LIST

Cruelty and the Beast
Once Upon Atrocity (taped intro)
Thirteen Autumns and a Widow
Cruelty Brought Thee Orchids
Beneath the Howling Stars
Venus in Fear (taped intro)
Desire in Violent Overture
The Twisted Nails of Faith
Bathory Aria: Benighted Like Usher / A Murder of Ravens in Fugue / Eyes That Witnessed Madness
Portrait of the Dead Countess (taped intro)
Lustmord and Wargasm (The Lick of Carnivorous Winds)
Encore:
A Bruise Upon the Silent Moon (taped intro)
The Promise of Fever
Malice Through the Looking Glass
Heartbreak and Seance
Nymphetamine (Fix)
Saffron’s Curse
Her Ghost in the Fog
From the Cradle to Enslave
Blooding the Hounds of Hell (taped outro)