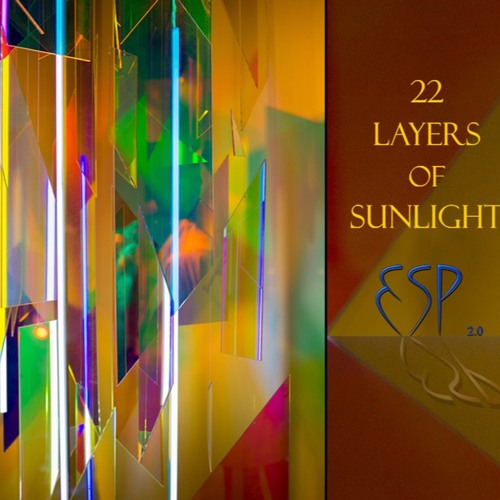 “ESP is a light disguise for Tony Lowe and Mark Brzezicki, and while the latter may be more familiar from Big Country, Lowe enjoys credentials as guitarist / producer for names such as Roger Daltrey, Julian Lennon and David Cross. From the first moments of ‘Overture’ it’s apparent we’re dealing with quality, with punchy drums, the strains of analogue synths, woodwind courtesy of VdGG’s David Jackson (who appears beside John Young, Steve Gee and more here), and guitar interwoven in a bold, expansive statement of intent… As a new force on the symphonic prog block, ‘Invisible Din’ is as good an opening salvo as you’re likely to get” (Gary McKenzie, Prog Magazine January 2017).

‘22 Layers Of Sunlight’, the follow up to the collective’s highly acclaimed ‘ESP Invisible Din’ debut album, released late in 2016, is an even more accomplished body of work which raises the bar way, way higher than its predecessor. Each and every one of the deeply evocative and stunningly original songs contained on ‘22 Layers Of Sunlight’ merges passionate vocals and intricate soundscapes, often with complex rhythmic structures, all overlaid with modern progressive rock elements and orchestral movements.

ESP 2.0 have lined up a series of gigs prior to and ensuing the release of ‘22 Layers Of Sunlight’ which was recorded with bassist Pete Clark and keyboardist Richard Smith, who will complete the live band line-up at the following shows:-

Peter Coyle, who formed The Lotus Eaters, in 1982, is best known for his international hit ‘The First Picture Of You’, which still enjoys regular airplay on many radio shows today. Peter, who left the Lotus Eaters in early 2017, has also written and recorded with Toyah, The Lightning Seeds’ Ian Broudie, Space’s David Yorkie Palmer, OMD’s Mal Holmes and Heaven 17’s Martyn Ware. Tony Lowe has played guitar with such artists as Julian Lennon, Roger Daltrey, Simon Townshend and The Pet Shop Boys, while as a producer he has worked with the likes of Bram Stoker, David Cross & Robert Fripp, John Foxx, Toyah, Chris Gray, Simon Townshend and more. Big Country drummer Mark Brzezicki has also worked with Phil Collins, Sting, Procol Harum, The Cult and Midge Ure.