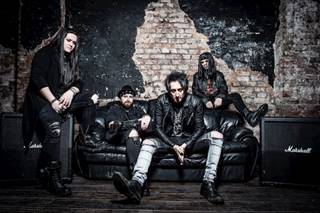 Another year another cracking lineup here at SOS Festival 2018, and All About The Rock is joined by those crazy fuckers from Falling Red! How are you guys doing?

Dave: How long has it actually been?

The last time we saw you at SOS it was back when it was held at the old venue at Radcliffe Civic, if I recall rightly you last played when Black Spiders were headlining, so that would have been back in 2010.

You guys have been storming the music scene, you have just played Amplified and have supported Jizzy Pearl, played Dementia Awarefest and now your here at SOS. What has been the highlight of your year so far?

October we did the album launch last year with Fahran and Fragile Things, to finally get it out the pledge was done which was a successful campaign for us. Just getting it out there and reminding people that we are here and that we are still going, as there were a couple of years where we didn’t particularly do a lot as we had toured the life out of ‘Empire’ then we wanted a fresh start so we had a bit of down time to look at things and decide which direction we wanted to take the band in. Getting it out there worldwide, digitally and physically just feels amazing.

You also did a little sneaky ‘Shake The Faith’ tour too, taking it back old school.

Dave: Yea back in February we did it for Rockmantic we did the album from start to finish.

Gutted I missed that.

Dave: Dont worry there is a little nod to it today, we couldn’t come to SOS and not play something off it, after all it’s where it all started with Rocksector.

They were the good old days, some good memories of gigs with you guys from way back then.

Dave: You will hear a couple of old songs by the end of today don’t you worry about that.

Getting back on track now what I wanted to ask about is these custom Falling Red pop figures you have had done. How did all that come about?

Dave: Well we haven’t had them made, but myself and Shane both collect ‘POP’ vinyls and Rozey and I are big toy collectors. We were just like right how cool would it be to have our own ‘POP’ figures done, so we got talking to a company who put the pictures together online really quick which you saw.  We paid all the deposits and that, then all of a sudden they went AWOL they disappeared off the scene off all social media, so I’ve literally had to go through eBay and paypal and claw our money back off them, but the whole idea is we will eventually do them. 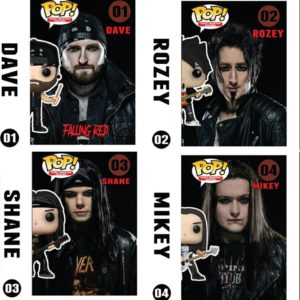 There is a big demand for them.

Dave: The feedback we have had for them is incredible. But having to get them privately made now, it wont be as cheap as going into the shop and getting one where there are several thousand made, we will eventually get them done but there will only be a limited amount. Even my mum is desperate to get her hands on a full custom Falling Red set of ‘POPS’. 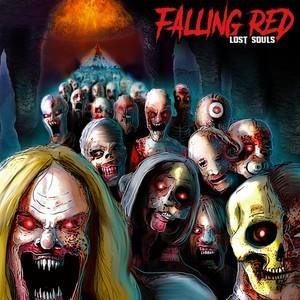 Your new album ‘Lost Souls’ has been flying off the shelves in HMV, this album seems a lot darker with lyrics deeper rooted, is this from personal experiences?

Dave: Probably experiences we have had with ex band members (laughs).

Mikey: Rozey is a very political writer. He will generally write about things that annoy him day-to-day. He tends to find lyrics in anything that causes annoyance (laughs).

Dave: We never went out there to make this a darker album, when we went in to do this album we were like lets write this album as if it was our last album. We have been going for 13 years we have had our ups and downs, lots of band member changes. So we just wrote what we enjoyed, some of it is dark but some of it still has the pop rock edge to it, there’s punky stuff on there, there’s hard rock and there is heavy metal. We just wrote a complete mixed bag this time. It’s still got the Falling Red vein running through it.

Tell us about your video ‘Hell In My Eyes’, that was utterly crazy, not what I expected from Falling Red at all.

Dave: We didn’t actually come up with it. TVPAV who has done videos for the likes of Massive Wagons, and with us now working with Terri and RPM. We wanted to do a video but we didn’t have any ideas about how we wanted it done or what we wanted to do in it. We knew which song we wanted to use and that was about it. So we sent it to Pav and said right what do you think as we have no ideas, and he came up with what you saw. When he first sent it we thought this doesn’t make sense, but when you listen to the lyrics it is that sort of deep-rooted hate for things and trying to fight your way through life when things are against you. You know it just works.I just love the twists in it. When your used to songs like ‘come on down’ and ‘out of control’ which is party central glam and sleazy, with this one we didn’t want the control over it we just gave it to someone who does that for a living.

Well he certainly made it a video to remember. So tell us what gigs have you got lined up for after SOS?

Dave: We are in Burnley next weekend, We have Rockwich, then we are down in london with Damn Dice, then we have HRH Sleaze.

Mikey: that should be a good one, Backyard Babies are playing that one.

The lineup for that festival is incredible.

Dave: Then we are going over to Europe for a little while.

Mikey: We have also got 2 headline shows, one in Newcastle and one in Manchester.

Dave: Then in October we have the European tour dates which have not been announced yet, then we are having another little break after that as Shane is having another kid. Then we have a big Christmas show on the 15th up in Carlisle, we are still trying to nail down the lineup for that one.

Lots lined up for you Falling Red guys then, that’s good to hear!

Is there anything you would like to say to your fans before we finish up here?

Dave: We are very humbled that people haven’t forgotten us!

How could people forget you guys?

Dave: We haven’t been left behind PR people and festivals haven’t forgotten about us and neither have our fans we are very honored to have loyal fans who have stuck by us over the years. For that we thank you!.