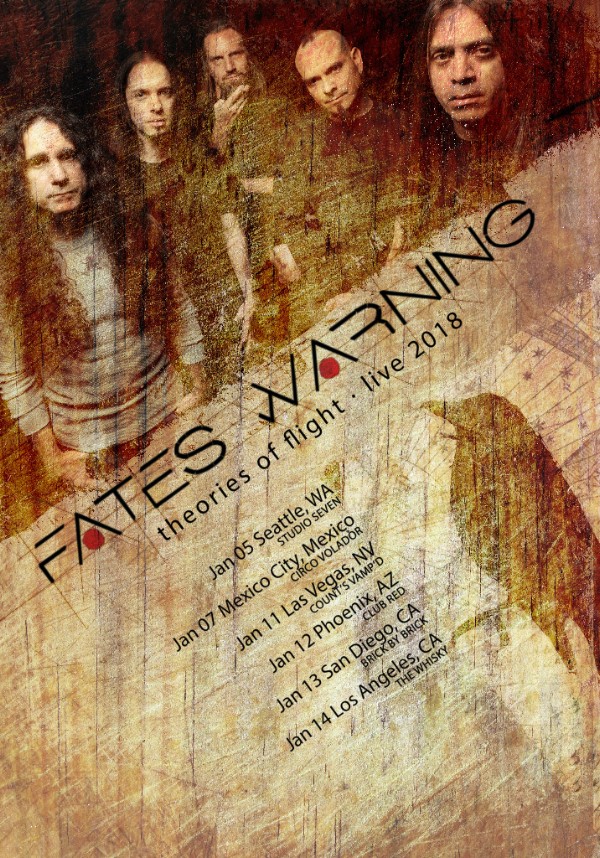 U.S. Progressive Metal pioneers FATES WARNING have announced further live shows in the USA and Mexico as part of their next touring run in January 2018 in support of their much acclaimed latest album, “Theories Of Flight”.

Below is a list of the exact dates, which now also include German post rockers LONG DISTANCE CALLING as special guests for the shows in Germany:

FATES WARNING vocalist Ray Alder has checked in with the following comment about the newly announced shows:
“After a break from the last European tour it’s time to hit the road again. And this time we’re headed to the West ooast! Also, we will be performing in wonderful Mexico City for the first time! We cannot express how excited we are to finally be able to announce these dates as it has been a long time coming. See you all soon on the West coast leg of the Theories Of Flight tour 2018!”

As previously announced, all of the European shows will be recorded for an upcoming live release, which makes the dates very special, as the band also commented:
“It’s been 20 years since we released our only live album, “Still Life”. It’s time for an update! In January we’ll be recording a series of shows in some of our favorite European cities. The best of these will be included in a live album to be released in 2018. While we haven’t decided on the final set list yet we’re planning on about a 2 hour set with as little overlap as possible with the “Still Life album”. Hope to see you all there!”
– Jim Matheos / FATES WARNING

“We’re excited to be returning to Europe in 2018 for these special shows!  Thanks to you, our incredible fans, for making “Theories…” such a success. We could not have done it without you! See you in 2018!”
– Ray Alder / FATES WARNING

Next to the standard CD and Digital Download, “Theories Of Flight” is also available as limited edition Mediabook 2CD (with 6 acoustic bonus tracks) and as Gatefold 2LP (with full standard album on CD and the 6 acoustic tracks as bonus on Side D!).

All physical album formats are available from the IOM webshop here:
http://smarturl.it/theoriesINOstore