After a lengthy hiatus of 15 plus years, gloomy melodic metallers PIST.ON have confirmed their delayed return with the announcement of a UK tour in June 2018. The band has lined up seven shows which kick off in Birmingham on June 23rd (see full schedule below).

PIST.ON, who will be celebrating 25 years since first forming are looking forward to picking up where they left off, “pissing people off and kicking ass on stage.” Having never officially split up, the band are set to emerge from their self imposed exile, a period which gave the band time to tackle numerous issues and retrieve a sense of sanity. 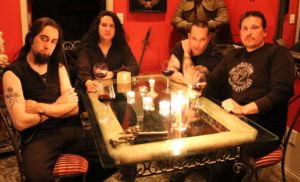 The band have commented:

“It feels great being reunited after all this time. When we got together for our first rehearsal, it was as if we’d never been apart; the chemistry was still there.”

“We kinda left everything hanging after our last tour but never split, just took a back seat and dealt with a lot of professional and personal issues that was thrown at us. We’ve all moved on but we kept in touch over the years. In our own minds we always had the desire to get back together, but it was never talked about until recently.”

“We’re excited at having the chance to do this again. We’re jumping back in and gonna see how it goes.”

Following the release of the Josh Silver produced debut ’Number One’ and the first single ‘Grey Flap’ through Mayhem, PIST.ON had an instant reaction with fans, leading to strong album sales. The attention the band was gaining sparked major label interest from Atlantic Records, who subsequently secured a deal for the world-wide release of ‘Number One’. However the relationship with Atlantic was short lived. With sales approaching gold status, PIST.ON came under pressure from the label to make a number of changes which the band were unhappy with. As a result the band took the decision to leave Atlantic.

In an interview at the time Henry Font recalled “Atlantic records saw the chance to make a lot of money because we were an unknown band selling a lot of records with virtually no airplay. Problem was, they didn’t know what to do with us”.

They returned to Mayhem for the release of the follow up album, ‘$ell Out’, which was a reaction to the troubling experiences they had encountered under the rule of Atlantic Records. Their frustration was clearly visible on tracks such as ‘Suddenly Sober’ and ‘Low’.

Alongside numerous headline tours, PIST.ON have featured on high profile tours supporting the likes of Marilyn Manson, Korn, Clutch, Fu Manchu, Type O Negative, Queensryche and The Misfits. The tours solidified the bands presence, building a healthy following on both sides of the Atlantic 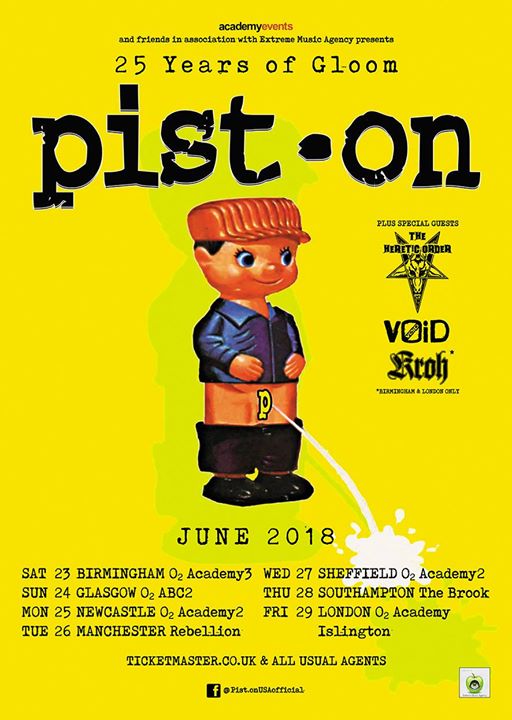 Joining the band on all dates will be The Heretic Order and V0iD with Kroh added to the bill in Birmingham and London.