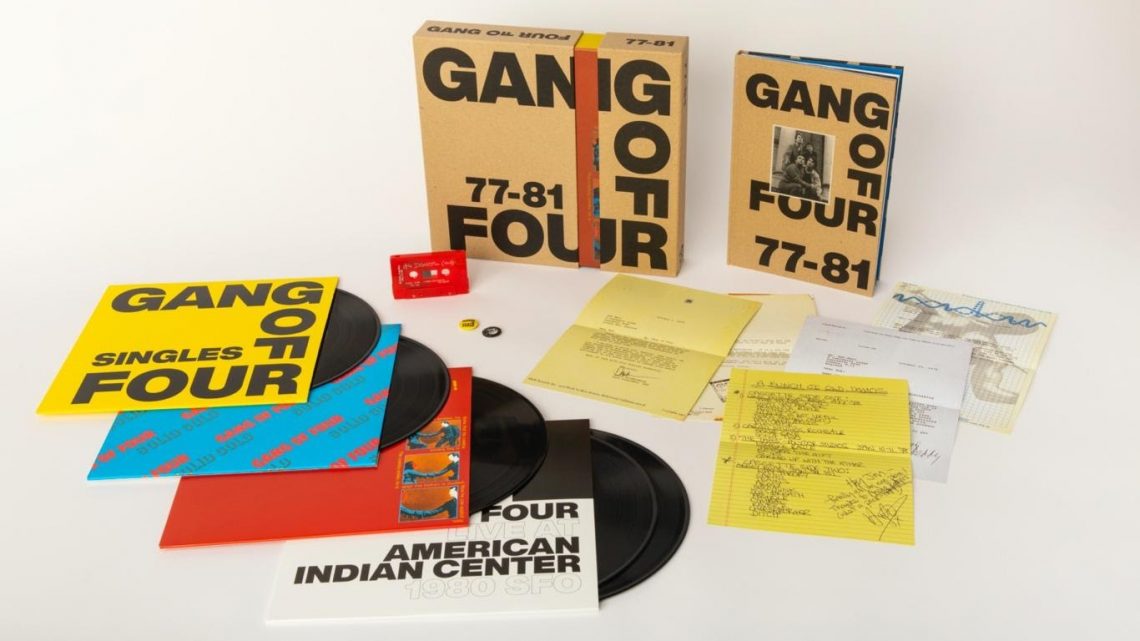 Initially scheduled for release last year, but delayed due to production issues, we are pleased to announce that GANG OF FOUR: 77-81 will now be out March 12 and available in LP and CD editions available at https://shop.thisisdig.com/uk/.

The book details the history and legacy of the original Gang of Four with never-before-seen photos, contributions from surviving original band members, rare posters, ephemera, flyers, essays, artwork, liner notes and more. It also marks the first official publication of their lyrics.

The CD version of the box will be out April 23rd. It will not include the badges or the C90. The demo recordings will instead be made available through a download code.

Today, you can watch a lyric video for the song “Damaged Goods” and listen to the demo of the unreleased song “Elevator,” which is included on the cassette.

Andy & I both lived in a shitty house in Leeds where we used to sing The Band or Muddy Waters songs, chugging disgusting homebrew beer that I fermented in a dustbin. We started writing songs – mostly homages to Dr. Feelgood or the Velvets – recording them on a crappy cassette player. Inspired by the New York scene and with UK punk rock on a thrilling rampage, Hugo, Gill, and I formed a band.

The first couple of gigs were those early songs and a fast Beatles cover. Dave joining us raised the bar. He was really good, and we quickly came up with new material we all wrote together, built on grooves from Dave & Hugo, over which Andy and I would improvise until we’d got somewhere.

“Elevator” always worked well live. It was a keeper until it wasn’t. By the time we got into the Workhouse studio to record ‘Entertainment’, it was in the dumper. I’d forgotten ever writing it until it was dug up for the box set cassette. I like it: the jangly riff, propulsive rhythm, and dopey lyrics take me right back to the day.

Yesterday marks the one-year anniversary of Andy Gill’s passing. A new tribute album, The Problem of Leisure: A Celebration of Andy Gill and Gang of Four, will be released in May via Gill Music and features contributions from Flea and John Frusciante, Warpaint, La Roux, and more.

Gang of Four was formed in Leeds in 1976 by bassist Dave Allen, drummer Hugo Burnham, guitarist Andy Gill, and singer Jon King. The band pioneered a style of music that inverted punk’s blunt and explosive energies — favoring tense rhythms, percussive guitars, and lyrics that traded in Marxist theory and situationism. They put every element of the traditional “rock band” format to question, from notions of harmony and rhythm to presentation and performance.

This original lineup of the band released two monumental albums, Entertainment! (1979) and Solid Gold (1981). A third, Songs of the Free (1982), was recorded with bassist Sara Lee replacing Dave Allen. After Songs Of The Free, Burnham departed the band and Andy Gill and Jon King continued on to release Hard in 1983. After this release, the band broke up. In 2004, the original quartet reformed for tour dates and released Return The Gift (2005).

In the last few years, their songs have continued to resonate with and been sampled by artists far afield from “post-punk,” including Run the Jewels (“The Ground Below”) and Frank Ocean (“Futura Free”). Now forty years since the original release of Entertainment!, Gang of Four’s legacy cannot be overstated. 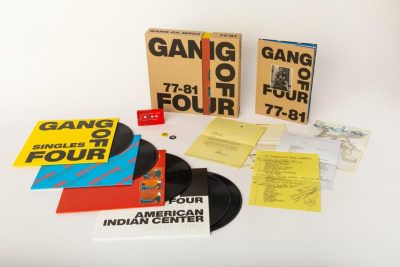 A3. Not Great Men

A5. Return The Gift

A6. Guns Before Butter

B1. I Found That Essence Rare

A2. What We All Want

A3. If I Could Keep It For Myself

A4. Outside The Trains Don’t Run On Time

B4. A Hole In The Wallet

A1. To Hell With Poverty

A2. It’s Her Factory

A1. Not Great Men

A3. Outside The Trains Don’t Run On Time

B2. Guns Before Butter

SIDE A -THE EARLY DEMOS (VARIOUS)

The Things You Do

What You Ask For

Silence Is Not Useful

Corked Up With The Ether

SIDE B – ABBEY ROAD DEMOS