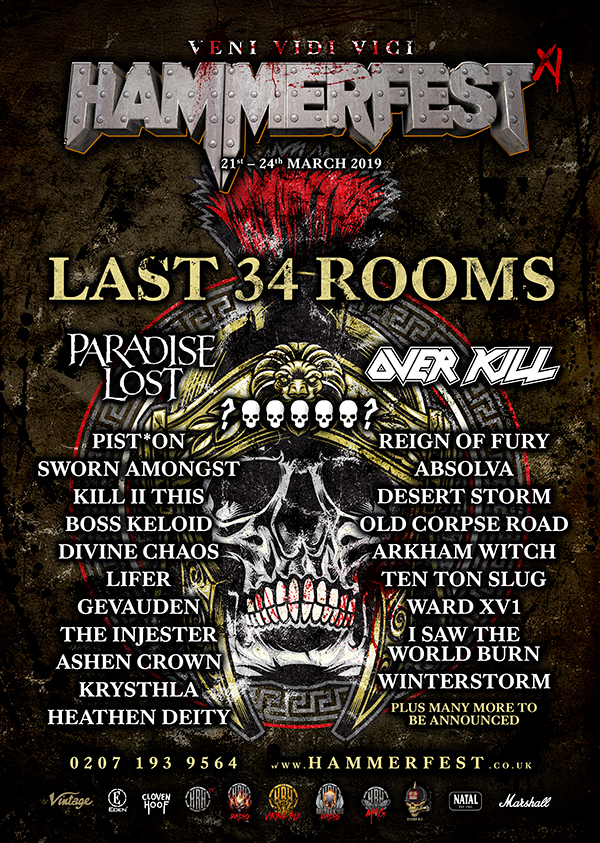 Bookings are open for Hammerfest XI, so be swift lest you miss this raucous celebration of the finest Metal.

Once more, amidst Snowden’s landscape, the Rock-loving tribes of Hammerfest will gather at Camp HRH, Pwllheli, in North Wales, for the thunderous music that brings together friends and fellowship, steeped in the lore of Rock, where they share not just music, but adventure, energy, and shenanigans, all brought together by the peerless Hammerfest team. The festival takes place between Thursday 21st March and Sunday, 24th, 2019.

22 bands have now been announced, with MORE TO COME (including the Saturday night headliner)

Paradise Lost will headline Thursday night. Founded in Halifax, back in 1988 Paradise Lost are one of the most distinctive acts in Metal, in particular in Gothic Metal (which their music strongly defined) and in Doom Metal. Forged in Death Metal, Paradise Lost have gone on to explore more mainstream electronic dark-pop (e.g. their album ‘Host’), and added electronic influences on ‘Symbol Of Life’.

Throughout their career, the band has maintained its own vision and followed it with consistent passion.  The quartet of Nick Holmes (vocals), Greg Mackintosh and Aaron Aedy (guitars), and Steve Edmondson (bass) have remained together, with only the drummer’s post changing hands several times. Now fielding drum prodigy, 22-year-old Finn Waltteri Väyrynen, behind the kit, Paradise Lost are returning to the sounds of their origins. Hear this great band yourselves at Hammerfest XI.

Friday’s headliners are Overkill: an American thrash metal band, formed in 1980 in New Jersey. One of the most successful East Coast thrash metal bands, Overkill have been called “the Motörhead of thrash”. To date, they’ve released eighteen studio albums, one album of cover songs, three EPs and three live albums. They were also one of the early thrash metal bands to sign to a major label (Atlantic Records, 1986), and rose to fame as part of the genre’s late Eighties surge, along with bands such as Anthrax, Exodus, and Metallica.

More are yet to be announced, including the Saturday headliner!

Remember: this is Hammerfest, so the gigs won’t be beset by bad weather or involve stomping though some muddy fields. HF lives up to HRH’s legendary standards: great bands, chosen by the community; quality gaffs with fully-equipped toilets, TV, fridges, heating and showers. Campervans can also be accommodated

Everything lies within a stone’s throw from the arenas and revelry. So get on board for another Hammerfest Quest for Metal.

TREMONTI To Release Concept Album on June 8 plus Novel