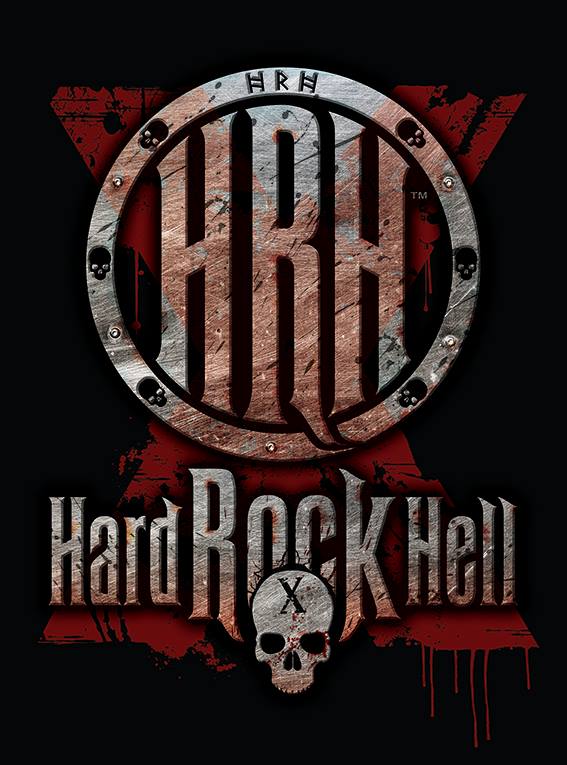 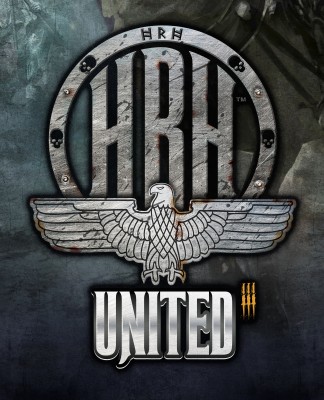 What a weekend & what a way to crack my HRH United virginity.

AOR, along with the Sleaze, Doom & stoner stages were really close together at the top end of the park with the Hammerfest stage being right down at the bottom so there was lots of running around to do & a hill to climb that’s ok the first 2 times but more than that it starts to be a bit of a killer. When I arrived Midday Thursday there were segways available (only 4) which would’ve been brilliant if I had managed to lay my hands on 1. Maybe I’ll take one down with me next time & find somewhere to park it whilst watching a band (I shall have to find out the drink driving law for one also).

After arriving on site, checking in & finding that the caravan was within crawling distance of (the pub, eatery & Hammerfest Stage) Mash & Barrel.  Thursdays don’t usually kick off til around 5/6pm so there’s plenty of time to sit back, relax, or have a nap if it’s been a long journey, before setting off to watch the first of the bands.

The opening band on Hammerfest (Crashgate) & The AOR stage (Toi) both did a great job to get the crowd motivated & set up the party atmosphere that is Thursday.

Out of all the bands that played the Thursday, Knock Out Kaine took the crown. The new single Cruel Britannia certainly got a warm reception & their set was a sublime pick of full on rock. 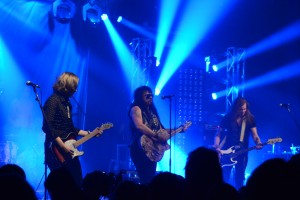 (pic of Knock Out Kaine courtesy of Angel Gareth)

The V & The Quireboys were also excellent on the AOR stage.

The Vs voice was certainly striking & not what you expect at all (unless you’re familiar with her band Benedictum). 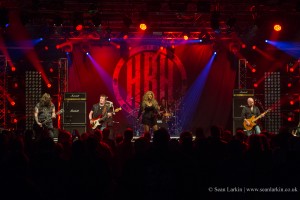 (pic of The V courtesy of Sean Larkin)

The Quireboys set was as entertaining as ever. Spike was on full form & is still a perfect blend of Rod Stewart & David Essex. The track 7 O’clock was an absolute belter & the crowd were in fine voice. 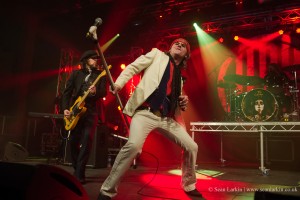 The gods of the Hammerfest stage were Tradegy. A heavy metal blend of Bee Gees, Weather Girls & ABBA covers which even had members of Turisas in the pit going crazy for. Now that truly is a site for sore ears. You truly haven’t experienced a festival til you see a pit go off to It’s Raining Men. A superb way to end the first day.

Friday was a great day. Loads of running up & down the hill to get to the AOR & Hammerfest stages to watch bands. The only draw back was the non arrival of Acid Reign which was through no fault of their own. There was a major traffic accident on the A40 & they were stuck in huge gridlock. Such a shame as that was a band I was so looking forward to seeing along with a fair few other HRH goers.

Stone Broken opened the Hammerfest stage to a rather small crowd but as their set progressed it started to fill the venue for Xerath to take the stage.

Third band on the Hammerfest stage was my band of the weekend DEF CON ONE who played a faultless set & looked as tho they were having fun which came across in their stage to audience banter. So much brutality in such a small package. Warface was just pummeling. The pit was hotter than the sun but that track seriously 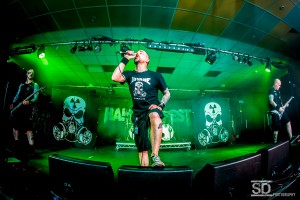 (pic of Def Con One courtesy of Simon Dunkerly)

Kane’d on the AOR stage were a massive surprise. Their album Rise (it’s such an empowering song to see live) is stunning & the harmonies on that album from the 3 sisters is tremendous. To hear them live was an immense joy. They really can wail & harmonise live. A band that is well worth watching. 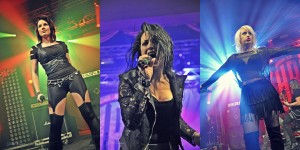 Veterans Tyketto were amazing. So much heavier & livelier than ever. Danny Vaughans voice was on fire & the addition of Chris Green on guitar has really beefed their sound live. Cannot wait for their new album. Hard to believe this band have been around 25 years & what a better way to celebrate than to play the album Don’t Come Easy from finish to start 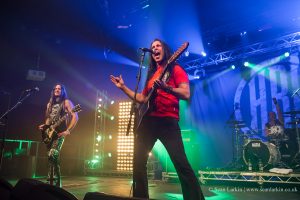 Missed the legend Joe Lynn Turners headline set on the AOR stage as had to leg it back down to Hammerfest to catch Cradle Of Filths headline set which also featured a couple of the Nympherno girls spitting fire & shooting sparks into the crowd with spectacular effect. Amphetamine was a highlight even tho I’d heard them sound check with this track from my caravan. They brought Fridays proceedings to a very warm & sweaty conclusion. 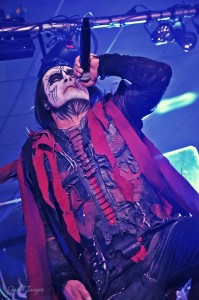 (picture of Cradle Of Filth courtesy of Mark Coxon) 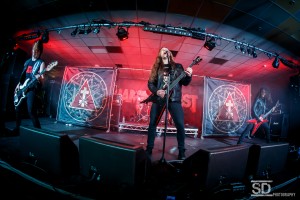 Headliners Exodus were good if not a little too clinical so it was a jaunt up the hill to catch Seething Akira who were just finishing whipping the crowd as I walked in just in time to catch their last number. 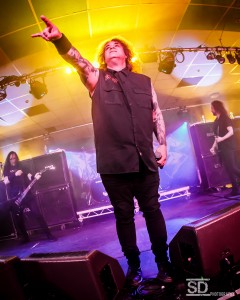 Back down the hill for the final act of the weekend Lawnmower Deth who never fail to amuse. This was the 1st time I had seen them in 2o+ years & it felt like I was 18 all over again. 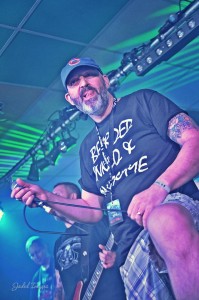 Hard Rock Hell United has left me physical broken, mentally scarred & longing to do it all again next year.

There are lots of highlights, many after show parties, many many memories & quite literally a shed full of stories that will never see the light of day in print (unless you know a very good lawyer).

My only complaint about there being 3 stages is that it was so difficult getting around to visit all 3 as there was just so many band clashes & that hill was just a killer.

All in all it’s a worthy weekend. As you expect with Hard Rock Hell events it has a true party atmosphere, you’re GUARANTEED to see some killer bands as well as meet up with old friends & make new ones.

One thing that is of note is the alcohol prices. Unlike other festivals, there is no need to take out a 3rd mortgage just to buy a round of drinks. The food choice on site is also excellent. From fast foods right through to proper cooked meals it’s all covered & for all budgets. There’s even a corner shop on site if you fancy cooking for yourself & guests in the caravan & it’s all at reasonable prices.

If you’re fed up of festivals where you have to camp in the pouring rain, mud & chemical toilets then HRH in Wales is for you.

Chic Festivals you did it again & thanks for having us.