After the partying on the Wednesday and Thursday of this years HRH, waking up and not being on the main site felt extremely odd. Not being able to stumble out of the caravan and into the Mash and Barrel  for a good full English fry up to soak up the night before s’ alcohol intake meant we had to fend for ourselves for edibles (which consisted of chocolate digestives and several cups of coffee as none of us could really be arsed to cook anything adventurous) as well as taking care of transport to the main site. Oh yes folks, life can be hard as a journalist.

The first band of the day was Those Damn Crows who kicked off the main stage at 12:50. They certainly managed to blow away the effects of the previous effects of last nights after party at the Bonga Wonga bar. They had a fairly decent sized crowd and got a really good reception. Kingbreaker, who hit the stage after them continued to bring the fire. Sadly their set started to clash with Goldray (who started the main stages entertainment at 2pm). I poked my head around the door of the main stage to check them out (it’s only a 45 second walk in between stages). They had an amazing turnout and the sound was superb.

A quick shuffle back to the 2nd stage for The Jokers before Syteria, were a complete surprise. I’d been badgered by several of my friends to see this band and I can see why. Not my bag of usual rock music (as I like mine with a bit more grit), but they were superb. Really engaging with the crowd and were a really tight act. One of the tightest I had seen so far this weekend.

Heading back to the main stage for Syteria (who I have seen a few times before) seemed to be struggling a little. Keira (the bass player) was in her own little world and wasn’t really engaging with Jax (guitars) or with Julia (vocals). They sounded great and the harmony vocals were, as always, spot on, but there was no real chemistry there today. Such a shame as the other times I have seen this band, they’ve been outstanding. 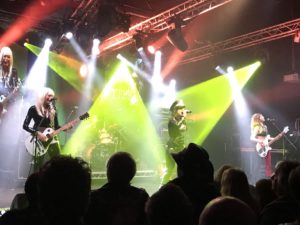 Heading back over to stage 2 I caught Fire red Empress. These guys had been on my radar for sometime but still hadn’t made it to my ears, so to say I was intrigued was an understatement. They blew me away so much I rushed up to the merch and purchased their debut album Black Morphine.

Really heavy live and a perfect cleanser for the rest of the day to follow.

Over on the main stage at this time was the blues rock band Graveltones. Their set was interrupted by The Kut over on the other stage. Although I had seen The Kut back in July, it would’ve been rude not to check them out again. Once again they didn’t disappoint.

Whilst I only caught around 10 minutes of Florence Blacks set due to it colliding with The New Roses over on the main stage. Florence Black were incredible. Again, having seen them before, this is a band that is on the rise and always put on a great show and they had one of the biggest turn outs of the day on the 2nd stage. 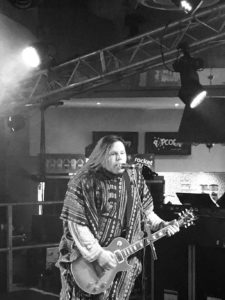 The New Roses are a straight forward rock n roll act with hints of Bruce Springsteen. They have a fantastic groove and the audience were lapping them up. They’re another band to watch out for in 2018

It was at this point the nibbles started to strike and there was a little time to grab a bite before Tyketto, so I set off to one of the many eateries and decided it was actually time for a coffee.

Tyketto arrived on stage at 10 past 7pm and played for an hour. It was a great set which was splattered with old and new tracks. The audience was at times louder than Danny Vaughns vocals especially when singing the finale Forever Young.

Next up were the band I had wanted to see again since the last time I saw them play HRH back in 2015, the magnificent Y&T. Dave Meniketti is still one hell of a guitarist and has a voice that sends shivers down your spine. The guitar solo alone for I Believe In You is worth seeing them for.

Y&T played over their allotted time, but to be honest, I don’t think anyone wanted them to stop at all. A lot of people would’ve been quite happy for the days events to stop there but we still had Airbourne to bring the day to a close. They were for me, quite simply, the band of the day.

The place was rammed to capacity for Airbourne. Security where doing their best to let one person out and 1 person in as to keep the health and safety and fire regulators happy. Airbourne did play a blinder of set but having seen the band several times before it was all pretty much the same as every other Airbourne show. Beer cans smashed off foreheads, guitarist being carried around on shoulders into the crowd etc. What was quite upsetting to see was the disabled section of the venue being asked to move so Airbourne could accommodate some of their gear as well as their own sound engineer.

The audience was in fine for and were like a pack of rabid dogs for this band. I don’t think I’ve quite seen an Airbourne audience like it. But they were still polite enough to move if you asked them to let you out (that was my experience from being at the front anyway).

All in all Friday was a great day.