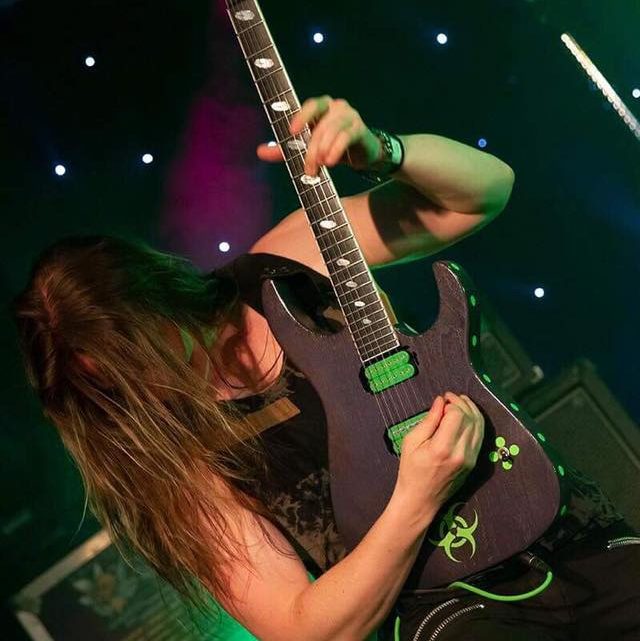 I must confess, I’m familiar with Harry due to him being the lead guitarist in Kane’d. I’m guilty (as I’m sure a few others are) of watching Kane’d live and wondering what Harry would be capable of producing if he was not constrained by a band.

Night Of The Blue Moon kicks off with Chill Bro. A moody track with congas, a gorgeous warm guitar tone and a lick that’s reminiscent of a Passion and Warfare era Steve Vai.

The warm tone continues through  the album and it’s delicious. His guitar was literally just plugged into a Boss GT100 with the settings messed around as his usual Engl was in the shop being fixed.

As for the guitar, the lucky bugger has a Caparison sponsor (who have an amazing roster of artists). It’s a simple yet effective setup and the guitar sounds amazing.

The title track Night Of The Blue Moon leads seamlessly into Trapped In a Melody, which features Chez Kane (of Kane’d) vocal refrain of the title along with Chris Green (guitarist of Tyketto) trading lead licks with Harry. I’ve not heard a paring like this since Friedman and Becker in Cacophony (I’m now wondering what an instrumental album with Green and Elliott would be like)

Don’t hurt me Penny Traitor is very much a Flying In a Blue Dream homage to Satriani.

Psycho Circus Monkey features Jimi Bell (House Of Lords guitarist) trading licks with Harry and it’s a beautiful thing and it’s no wonder it’s the lead track from the record..

Suck This samples Harrys hoover of all things (proof that you don’t need a Makita endorsement to achieve the same effect as a drill). It provides a real funky backbeat. Coupled with whammy neck slides sounds fabulous along with the electronic drum sound.

Clap Along To This makes Devin Townsend seem normal. So many different and interesting time signatures packed into a track lasting less than 2 minutes is simply infuckinsane. It’s my favorite track on the album.

The Meat Eating Vegetable has a brilliant fun groove that got my foot tapping and head nodding.

Finally there’s Cloud Eight and Nine Tenths that appears to pay homage to the Flying In a Blue Dream era Joe Satriani.

There are so many nods to so many different guitar players which makes this album an amazing listen and will have you going back through your archives to listen to that player.

Admittedly this instrumental album isn’t breaking any new ground or molds. What it is doing is paying homage to an era of guitar instrumental albums that a new generation is finally beginning to discover. And for an old c**t like me it’s simply brilliant. I am in man love with this record.

It’s only ONCE in a blue moon that a guitarist of this caliber bursts onto the scene and throw their hat into the ring and Harry Scott Elliott has done that with Night Of The Blue Moon.

The Dead Daises – Locked and Loaded (The Covers Album)