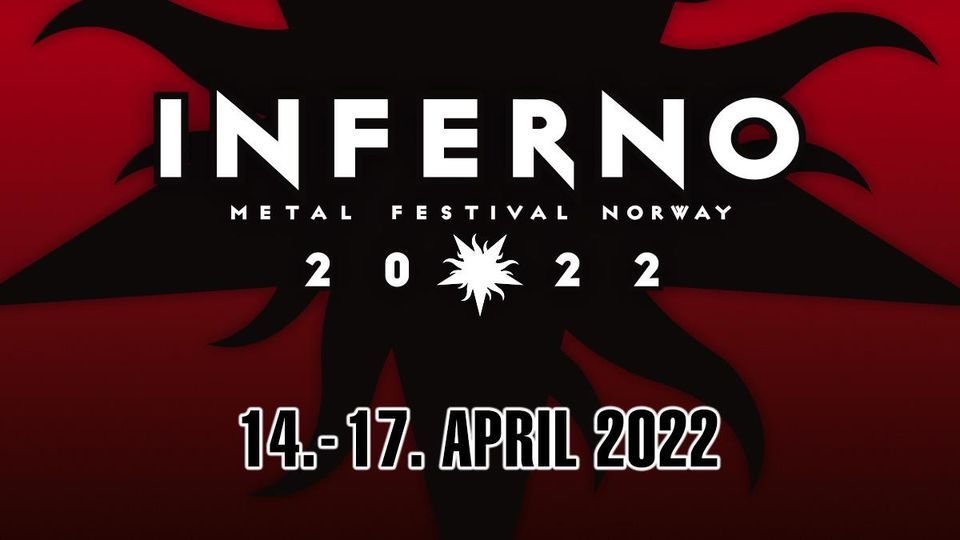 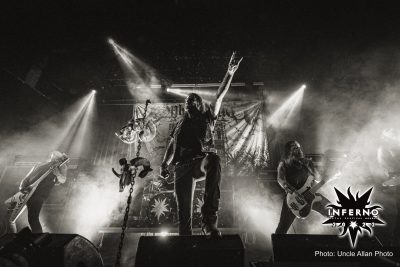 Brushing the late night feast crumbs from my bosom, I jumped out of bed to get the final day of Inferno Metal Festival Norway 2022 up and running. Our team spent the morning by the fjord at the opera house, lapping up the sun, after the obligatory hangover-curing sauna that is.

Back at the The Rockefeller Music Hall for one last jaunt of festival madness, we roll in for an Easter Sunday in True Norwegian style. Spreading their Gospel of Hate, Trondheim’s Whoredom Rife open up the day, bringing their filthy Nidrosian Black metal to the main stage and they are not fucking around. Ram skulls and chains only add to the impact of their attack as they open with Curse of the Moon from their most recent 2021 album, ‘Winds of Wrath.’ A professional and adrenalin fuelled show continued, enjoyed by both the band and by the receiving fans in the pit.

The next big thing to hit us are Finnish multi-instrumentalist masters Oranssi Pazuzu and all I can say is- I don’t think we were prepared for that. All members are playing their part in a very well rehearsed feat of incredible musicianship. Creepy vocals echo over cutting bass grooves while the synth destroys our sanity, a trombone whales out sounds I didn’t even know a trombone could make. Combined with a light show to make the ravers jealous, their set is entrancing and their sound leaves us utterly perplexed. I’m dizzy now and I think I need a drink, to the bar. 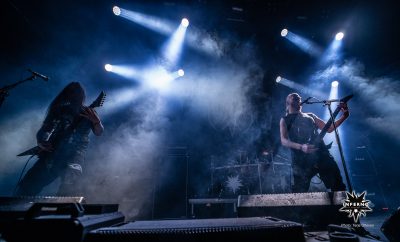 Crushing since they made demo tapes back in the 90’s, Norwegian quartet Myrkskog show how their brand of Blackened Death has lasted the test of time. They take us on a journey through many merciless tracks off their 2000 debut album ‘Deathmachine’. On the main stage, guitarist and lead Vocalist Descructhor gets us pumped up, “I know it’s our fourth day of Metal, you guys are tired, so let’s get a mosh pit happening!” Secthdamon is a speed demon on guitar, his backing vocals add such depth to their overall tonality. By the time they execute Discipline Misanthropy the crowd is a hot and sweaty, singing along, fists in the air and very content with their Death Metal Dinner.

Down to the dungeon tonight, we catch a snippet of three piece UK Death outfit, Dyscarnate who are are playing their Inferno Debut. These guys need no bells and whistles, they are just straight up punishing Death Metal and rip through a relentless set on the John Dee stage to well a deserved reception from festival goers. The two part vocals in The Promethean, ensure the mosh pit has some fury to destroy each other too.

At this point I would say the venue was at full capacity, which makes sense considering the next band were on the top of the ‘must see’ list for nearly every ticket holder this year. Securing our place on the top balcony for the best view, the curtains are drawn and the festival roars, for we are in the presence of Thrash Metal royalty as German Legends Kreator grace the main stage tonight. This was Kreator’s first gig post-pandemic and they certainly didn’t hold back, this setlist was the stuff dreams are made of. The fire and the flames came out for the chorus of Satan is Real and Inferno are loving every minute of it. 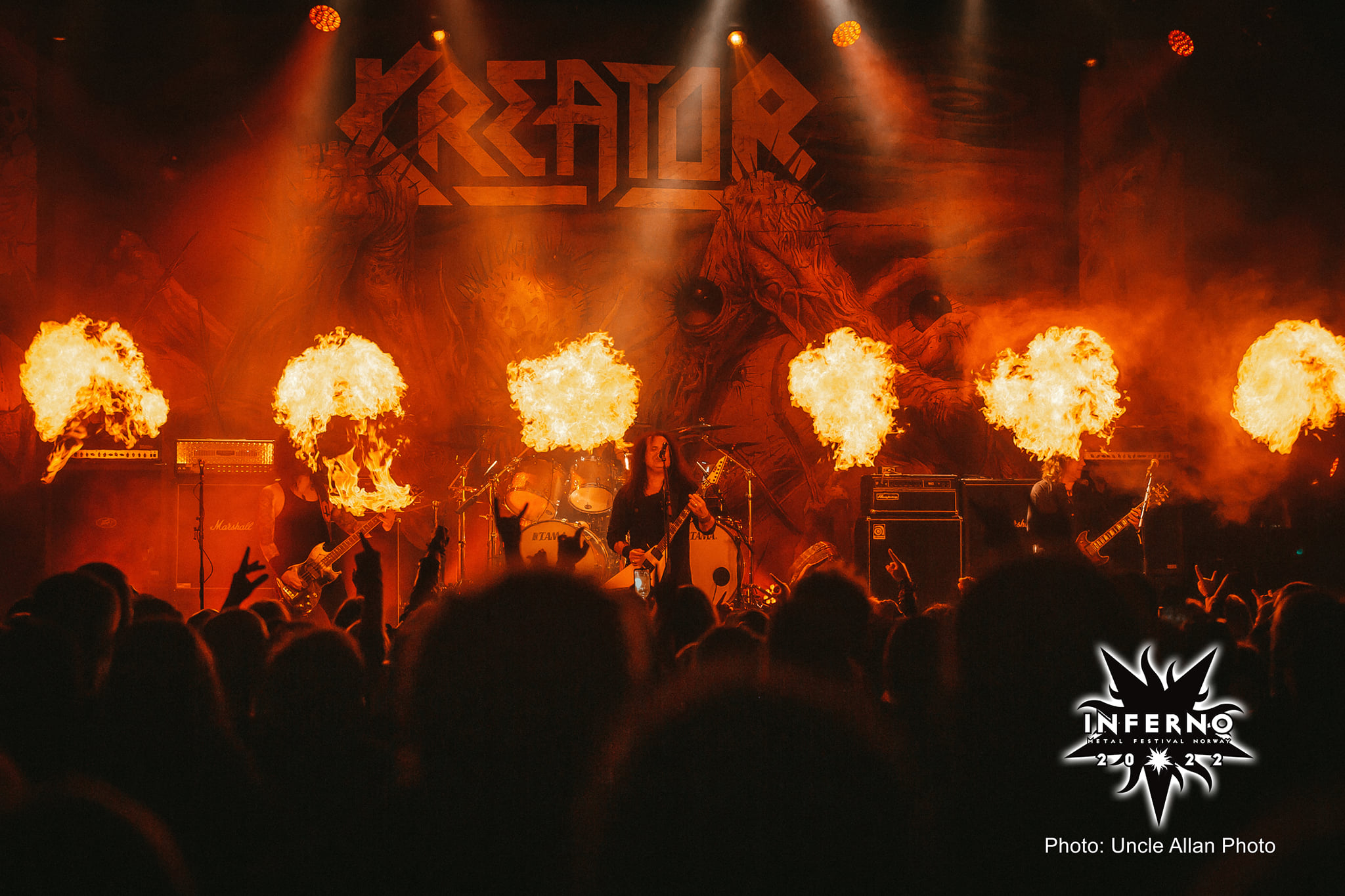 They are chanting louder then frontman Miland “Mille” Petrozza who is his charismatic self on stage, engaging and shredding his way through their backlog of hits. He encourages a massive wall of death, “I wanna see this place turned into a total fucking massacre alright?” A loud bang during Enemy of War erupts a party cannon of streamers from the side of the stage. The white decorations are everywhere, hanging from the roof, the railings and the circle pit is going mental, taking the streamers along with them. Mille walks back to the microphone with a familiar flag in his hand and we lose it, “It’s time to raise the Flag of Hate,” This place is now an adrenaline fuelled chaos pit as the pyro kit proves its moneys worth. As the smell of burning hair fills the hall they give us one final blow to the senses, confetti canons shower Inferno as they say goodbye with Pleasure to Kill. What a show. 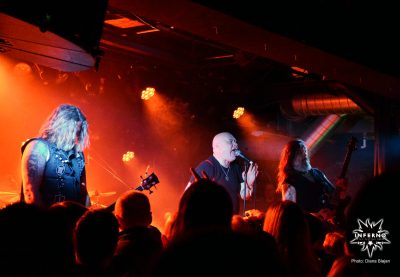 Downstairs, an all star cast is performing on the John Dee stage. Order are back and they even bought their own witch! Frontman Messiah (ex-Mayhem) is a mighty force, standing tall in red suspenders he is intriguing to watch as he tells his tales through a savage vocal range. Joined by Manheim (ex-Mayhem) on drums, bassist Stu Manx (ex-Glucifer) and Anders Odden (Cadaver) on guitar, they take us on a nightmarish journey. A lengthly performance by four very talented musicians who show that together they have created something momentous. Their gospel is not only memorable but testimony to how the primitive voice of Order has been kept alive for all these years.

The final act for us this year is the one man black metal creation that is Norway’s Taake. Hoest is ever the entertainer for his second appearance at this years festival (the first as live vocalist for Gorgoroth) draped in a tattered Norwegian flag turned cloak, he is part demon, part goblin. He stalks the stage as he leads the ritual, wielding his microphone stand like a weapon. Pummelling blast beats hit as sinister guitars layer over each other throughout this late night slot. A good mix of ancient and new they fly through, Fra Vadested Til Vaandesmed and of course Myr prove to be crowd favourites. The audience anticipation radiated, waiting for guitarist Gjermund to pick up the banjo for his solo in Myr. By the time it came there were many a drunken hands flailing around the mosh pit, dancing a jig or two. They bid farewell and wish a happy Easter to a very enthused yet deflated Inferno festival. 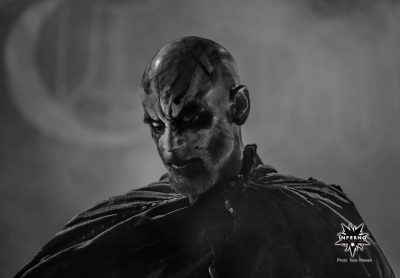 Finishing off the Easter mayhem, we threw some mango IPA’s down the hatch at Vaterland in a last minute attempt to gain some dutch courage to pack our bags and just like that, it was all over. But we thank the Metal Gods (and festival organisers of course) that it could happen at all after the pandemic madness we’ve all endured.

An early morning flight back to Scotland lead to contemplation and admiration for finally being allowed back to a major festival. Seeing bands again, catching up with friends after so long and being able to travel abroad. Times had changed for a while but at least it made us all appreciative of what we have, which made us enjoy it all the more. As the plane took off from the tarmac, mist sat quietly over the mountains, pine trees peaking though and corners of the winding fjords sparkle with frost. Darkthrone plays Quintessence through my headphones and I couldn’t agree more.