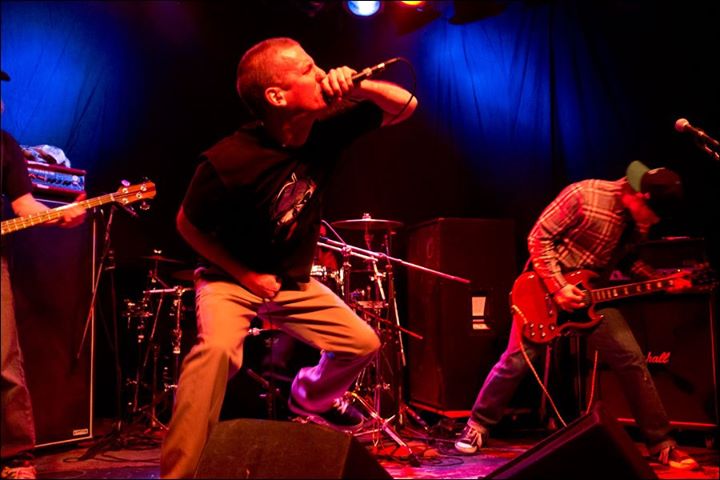 I’m a huge fan of Bavarian / Californian punk rockers Scheisse Minnelli and recently reviewed their new release, Sorry State Of Affairs – an awesome 12 track album of full speed thrashpunk that I’ve had on repeat play ever since I got my hands on it.  I was therefore delighted when vocalist Samuel el Action replied to my request for an interview for All About The Rock !

Hi Sam.  I’m a massive fan of Scheisse Minnelli, so a huge thank you for agreeing to this interview for All About The Rock, and to giving me and our readers a chance to learn more about the band and your music !

You formed Scheisse Minnelli in Germany in 2003.  Can you tell us the story of how you’ve ended up living in Germany, and the story behind how the band was formed?

The full story is in a book I wrote that comes with The Fight Against Reality CD.  But the short of it is that I was in a rut in the US.  I was doing some bad things and needed to get out of that vicious cycle.  Not only was I able to break that cycle but I was able to travel the world, see loads of amazing things and meet loads of killer peps. 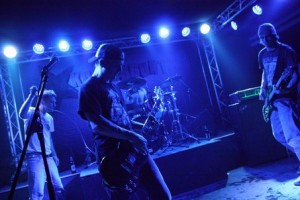 The new album is the first album with the current line-up.  Can you tell us a bit about each of the guys in the band?  How is the new line-up working out?

The current line up is Dash on bass.  He has been there from the start and is an amazing bass player and just an all around fun dude to hit the road with.  On drums we got Dudel who has also been there from day one.  He is a madman on drums and just does not give a fuck.  He is always down for whatever, I love that about him.  On guitar is the newest in the crew, but one of my oldest homies out of the music scene, is Mikey.  He shreds, period.  Before I left the states there were like 3 or 4 people I told that if I start a band overseas you are always welcome and Mikey was one of them.  I love playing with him and he brings some more Cali back into the band.

You guys have a new album out  the awesome Sorry State Of Affairs.  Can you tell us about the  album - how would you describe it musically, and in terms of subject matter?  How does it compare to your previous albums?

We have matured as a band for sure.  When we recorded the songs for Fight Against Reality we did it in like 3 or 4 days and recorded 27 fucking songs!  We learned and wrote most of them in the 2 months before the recording.  It was like cramming for a test last minute.  People love that record as I do but we tried to do too much in too little time for sure.  This time we took our time to put together the album exactly how we wanted it to be and even did demo recordings in the studio we recorded in.  I love all the records for different reasons, they are like benchmarks in our lives and this one fits to here and now.  Musically we are still doing the same but trying some different things too.  Also adding Mikey to the mix is like bringing in punkipedia. He knows every punk riff ever and nows how to form songs in a killer way.

What was the writing and recording process for the album?  I read that it was recorded live with no overdubs or headphones etc  very cool !

We are a live band, never got into doing ‘fat’ studio albums with a thousand overdubs so we stuck to that ethos.  We always did it in the same room but with headphones.  This time we stripped it down even further and set up like we practice and just went for it like we were practicing, was awesome.  And Dash‘s bass sound is not only fat but distorted so it works like a rythm guitar when needed. 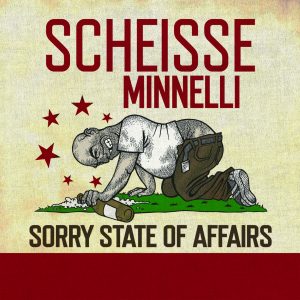 What is the local music scene like where you live?  Whats it like in the rest of Germany, and wider Europe?

The scene in Frankfurt is really small, but really cool.  Since we live near the airport there are a lot of international acts that play here or in the area.  But since it is small you can’t gig out here too often.  When I lived in the NorCal Bay Area you could play the same town many times a month and still have good gigs.  Here you gotta watch out that you don’t do that.  People will get sick of you or think they can just go next time.

What has the reception been like for Scheisse Minnelli and the music you play?  Do you think things would be any different if you were in the USA?

We love playing all over Germany and Europe.  In Germany there are many killer scenes in big cities like Berlin, Cologne, or Hamburg but also in some other not as big cities like Kiel, Darmstadt or Munster.  We have played almost all of Western Europe and a big chunk of Eastern Europe and outside of Germany I have to say that Belgium is awesome and Croatia is killer, but anywhere that will have us and show us a good time rules!  In the USA, well at least Cali, there are just too many bands. People are just overloaded, so here we stand out a bit more.

Do you have any favourite German bands that you would advise people to check out?  Any other (non-German) bands youre into right now?

Old German bands that are killer are Spermbirds, Inferno, Skeeziks, Hostages of Ayatollah, and No Alligence, but only Spermbird still do shows from time to time.  Newer German bands that rip are Chuck Damage, Snob Value, and Death Jocks among others.  In Europe there is The Shining (NL), Night Fever (DK), Reproach (BEL), 7 Crowns (UK) and many more.  The scene has grown since I got here which is a great thing.  At the moment I am listening to a lot of soul and jazz music as well as hip hop and thrash.  Odd mix I know.

Who are your musical influences?

Well every day life influences our music.  Life and all the good and bad times that come with it.  But most of the bands that really influence us come from the burgeoning 80s HC punk scene from America.  We have been compared to this or that but in the end we are mix of those bands and the life we have all live up till now, the mistakes and the things we learn from them or don’t learn from them.  I grew up in a mulicultural family and my father was/is a jazz musician so I had may different sounds flowing through my ears as I grew up in a the Bay Area which is a music mecca itself.

How would you describe your own personal approach to music and life in general?  How do you think living in Germany has shaped things for you?

I try to take things as they come.  Just like music.  I try to take it as it comes.  I keep an open mind but if something rubs me the wrong way I try to avoid it if possible.  I don’t have time for unneeded stress or unneeded ear pollution if you know what I mean.  Living in Germany has really calmed me down.  Though people think I am still a go go dude, but if they knew me before they would trip.  Life here seems so laid back.  Funny cause Cali has such a rep for being chilled and laid back, but for some reason I feel way more chilled here.  Though I love Cali and miss the weather and the beach.

Have you guys got plans to tour the new album outside of Germany?  I’d love to see you guys come and play the UK  and Scotland in particular!

We are doing a bunch of German and Swiss shows and festivals this summer.  In November we are touring Indonesia with our buddies 7 Crowns from Bath.  We did the UK last year.  We have loads of fun there especially at the BOB fest in Bath.  If we get the right offer we are down to go anywhere.  Tell your friends to bring us to Scotland for a weekend, we would love to do it!

Finally, is there anything else you would like to say before we wrap up this interview ?

Thanks for hitting us up and helping us out!  Hope to see and meet new peps on the road man!  Get the new LP Sorry State Of Affairs and blast it so loud your neighbor pounds on your wall.  And don’t chop down cherry trees!  Later Hosen! 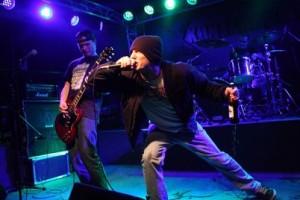