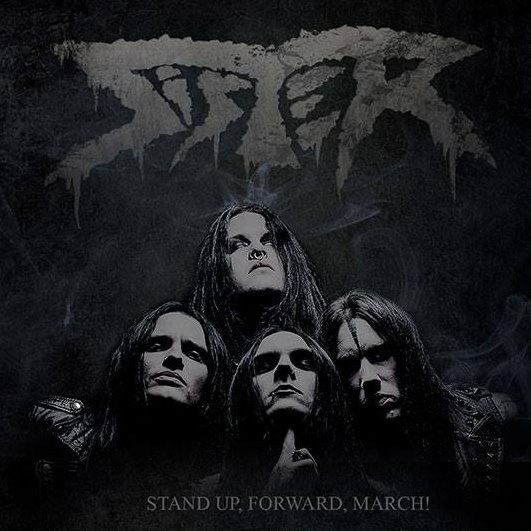 You guys have your ‘Destination Dust’ tour kicking off in November, will you be touring a mix of your old back catalogue with some material off your new album ‘Stand Up,Forward,March’, what can we expect to see you perform?

Yes that is exactly what we intend to do. We’ll be digging up some songs from our previous releases which we haven’t played live that much and try them out. A fun thing for both us and the fans. Of course we’ll blasting out some new tunes from our brand new album. Can’t wait for that! More than that, It’s all about putting on a great show. Rock n’ roll, blood, guts and gore!

Can you tell us a little bit about the new album?

It’s a bomb! It’s really the best album we’ve ever done. The recording process was just a great time with us in the band and producer Jona Tee experimenting in the studio. We had Tobias Lindell who also did our debut album to mix it and he really understood and captured the sound we were looking for. It’s a mix of dirty hard rock, killer melodies and just a great sound. There are fast songs, slow songs, dark songs, catchy song etc.. It’s all there and I think we’ve created something great this time. We are very proud of this album.

Your first single ‘Carved In Stone’, has been launched as a video. Have you any fun stories from on set when recording this video?

It happened so fast. Just in time for the single release we thought like “shit, we need to do a video for this one” We got put together with René from Greenworks Television who produced it, he came to Stockholm one week before the release and the week after it was done!
We shoot it at a bikers bar/garage outside of Stockholm and they were there serving us with beer and whiskey all day long. We had a great time!

Regarding the song writing process, can you talk us through how you guys put songs together?

Me and Tim has done most of the writing parts on this one. Tim comes up with a riff and I put words and melodies to it. We have worked hard and developed our way of writing music. A big help has been Jona who produced the album and Co-Write some songs with us. He helped us to get that extra push to really lift the songs. He did a great job. Jamie has also been doing lyrics and songs, he and Martin worked together on a couple of songs  that made it to the album as well. We really have no rules when it comes to creating music, we all work together, the best ideas wins and the four of us all contribute with their part to create our sound.

Outside of SISTER do any of you guys have any other musical projects going on?

No not really. Nothing serious. Martin has his solo project, Sweet Creature which tuns out really cool. The rest of us focus 100% on Sister.

Outside of the band’s style of music, do you guys listen to other genres/styles of music, if so what’s you listen to?

All kinds of music, it’s impossible to tell. Everything from Bonnie Tyler to Bathory.

As touring musicians do you think it has become harder to sustain a livable income solely off the back off music, and if so why do you think that is? 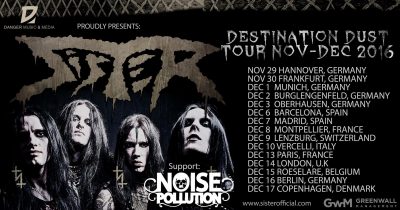 It is hard. I don’t know if it has become harder. We have been touring since 2008 and we’re still trying to figure out how to survive the next day. You really have to work hard and don’t expect any rock star dreams bullshit (at least not money wise;) But I mean, it’s not the 80’s anymore, We don’t play popular music. This is underground and not the mainstream and we really have to push our thing by ourselves to win our fans over and make them buy tickets to come see us live. You don’t get anything for free in the rock n roll business, but it’s our way of life and the only thing we can and want to do.

What do you enjoy most about being a musician?

The satisfaction after stuff is done. When the album is recorded, when a gig went great, a release of a single/video or whatever. To see that the hard work actually pays off and turned out great. It’s the best feeling and the search of this feeling pushes you to work hard and to go on to the next step.

Release party for “Stand Up, Forward, March!” Nov 25th in Stockholm at the Hard Rock Café. Touring Europe in Nov/Dec. We are already working on tours and festivals for 2017 and we have ideas for new music and recordings.

– Check out our new album “Stand Up, Forward, March!” to be released on Metal Blade Records Nov 25th. Pre order it today! And come see us live on the Destination Dust Tour all over Europe 2016. Check out www.sisterofficial.com for more info.

Thank you for your time, we look forward to catching up with you guys in the future. 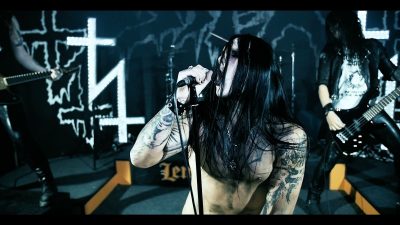