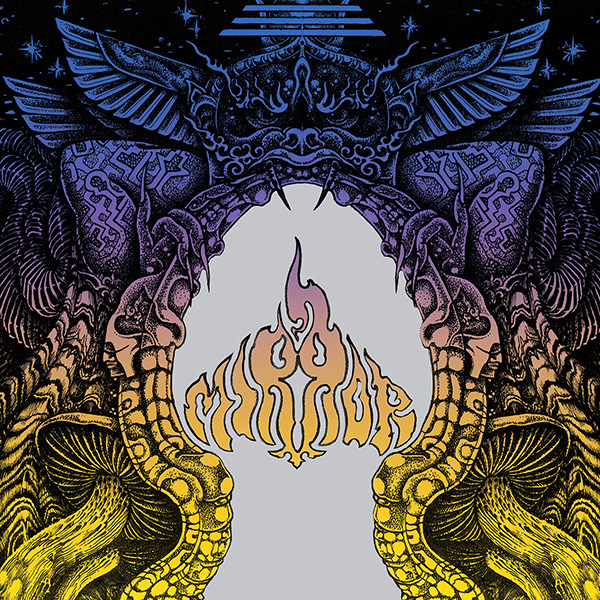 AATR – Cheers for taking the time to have a chat with us. Hope we’re not taking you away from your tattoo studio.

AATR – How did things come about with Mirror?

TAS – I wanted to start a classic heavy metal band. I had a band called Satan’s Wrath which was more of a death metal outfit & it was quite hard finding members for a classic metal band.

AATR – But find them you did.

TAS – Yes. Firstly I contacted singer Jimmy Mavromatis who I’ve known for over 25 years & he was up for it & that’s when I started to write the songs & that’s when I contacted Stamos from Satan’s Wrath & then Komos the drummer came on board. The only thing missing at this point was a second guitarist. Komos suggested his friend Matt Olivo from Repulsion, so we sent him the demo & he was up for it also.

We then started recording. Everyone was happy with the songs & it happened really easy actually.

AATR –  It really is a classic sounding album.

Tas – I grew up with classic heavy metal & then around age 12 or 13 thrash happened. I still listen to the classics like Maiden, Judas Priest or The Scorpions. This is something that I’ve always wanted to do & I’m very happy with it.

Tas – A classic metal album was needed as there a lot of modern metal coming out that I’m just not sure about. This modern metal in my mind is not really metal. There’s no real melody & it’s just chugging away. Everything sounds so computerised. The drums sound like a type writer. It’s like pop with distortion. They come across as kids just whining about something.

When Maiden started they were kids but had grown up songs.

AATR – This is true. Back then there were genuinely things to moan or comment on as that’s what society & situations were like & it was really the only way to speak out.

Tas – True. They didn’t cry about getting a hair cut (laughing)

AATR – “I’ve been grounded, they’ve cut up my gold credit card but allowed me to keep my cell phone. I’m so pissed off” (laughing).

Tas – Paint your nails black & away you go (laughs)

Tas – There’s quite a few actually which is why I hope that kids get into the classics like Sabbath, Maiden, Priest & this whole thing just stops.
I was speaking to a friend of mine about when the big bands go, like Maiden & Priest, who’s going to take over? It’s a scary thing to think about.
Back in the 90’s metal took a strange turn for what I think is the worse but it seems like musicians now want to go back to basics & how it all started.

The good thing about playing festivals I do see a lot of people of all ages wearing classic metal shirts especially in Sweden & even England which does give me some hope.

AATR – What have you heard lately that you’ve actually liked?

Tas – Of course my friends Grand Magus, Ram & this one band on Metal Blade called Noctum. Their album Final Sacrifice is really good. I also like my friends from the UK , Amulet. There’s a few good bands out there & hopefully there will be a lot more.

AATR – How did the relationship with Metal Blade come about as they seem to be at the forefront of bringing back the classic sounding Metal?

Tas – My previous band Satan’s Wrath were on Metal Blade & I was pretty certain that Mirror would also come out on that label.  Not just because we’re kind of friends over there but Brian Slagel, the owner of the label, is a massive fan of classic heavy metal. I was waiting to have the finished album before I sent it to him & he was up for releasing it. I feel like family with them.

AATR – What about touring?

Tas – We have a couple lined up in April Manchester & London with Repulsion as Matt also plays with them so that should be fun. There will be more coming.

We’ve just signed with the Agency Group which I think is now called United Talent Agency which hopefully book us some good shows as we can’t wait to play.

Tas – Depends on how much beer we have to drink (laughs)

AATR – While we’re on that subject are there any pre-show rituals apart from getting drunk?

Tas – I haven’t played a gig since Electric Wizard. We were wasted constantly as playing slow is kind of easy for me (laughs). But with Mirror I think we’ll have to be a bit more careful as alot of the songs are a bit more complicated & fast, so we’re going to have to control it a bit.

I’ve already decided that with Mirror I will play the album backstage & warm up with it to make sure it’s fresh in the memory.  Which is a bit different to Electric Wizard as that was just a mess (laughs) So with Mirror I think it’s just be 2 or 3 beers before stage.

AATR – Does tattooing get in the way of practice?

Tas – Not at all. I practice every night. As soon as I’ve put my son to bed I practice for a couple of hours. I use a 1981 Gibson flying V bass which they only made 375 of.

I did use Rickenbackers as I had 3 of them but the moment I saw the Gibson I thought I just have to play it. They sound & look amazing & I love them. So from now on I shall only play those as I ahad to sell 4 basses including 2 Rickenbackers to buy the 2 Gibsons.

As for amps I’ve always liked the classic Ampeg with the 8×10 cabinet which I’d never change. Actually I would change if I had 2 of them (laughs)

Before we head out on tour we’re going to head into London, rehearse at Komos’s studio where he has a huge collection of amps. Every amp you could imagine.. He even has Tony Iommis cabinets which came from Cathedral when they toured with Black Sabbath they purchased a few cabinets from Tony Iommi. In fact one of the Iommi cabinets we used on the Mirror album.

AATR – You can’t get much more classic metal than that.

Tas – Exactly. I almost cried when I saw the cabinet with the Black Sabbath spray paint on it. It was a bit of an honour.

There was also this one time when we were sitting in the airport waiting on a flight & this guy walks up & asks us if we were a band. I explained that we were & called Electric Wizzard. The guy looked familiar & I couldn’t place him but he said he would check. Turns out it was Carmine Appice. It was a bit random but he came straight up to us. He looked fantastic.  When he left us we were all speechless kinda like “what the hell just happened?”

AATR – Tas, I understand you have some tattoo work to take care of. It’s been an absolute pleasure to speak to you. Good luck with the album.

Tas – It’s been a pleasure & hope to see you soon.

The album is available now from all good & bad music retailers. Do yourself a favor & grab a copy.