After the success of their previous collaboration «Skuggsjá»; Ivar Bjørnson (Enslaved) and Einar Selvik (Wardruna) are now following up with an imposing new piece entitled «Hugsjá». The word ‘Hugsjá’ means to see with, or within, the mind – and it reflects the idea that one’s mind has the potential to see further than the eyes can reach. By weaving together indigenous and contemporary thoughts, sounds and instruments, they are inviting you on a vivid journey – exploring the distant history and traditions along coastal Norway.

The album is set for release through Norwegian label By Norse Music on April 20th 2018.

Hugsjá was first commissioned by, and performed at, Bergen International Festival in 2017, as part a series of concerts named Nordvegen (“the northern road”); inspired by local history and traditions in each of the places visited. The Nordvegen concerts created an acoustic and intimate basis for the grandiose commissioned work, “Hugsjá”. The piece received its world premiere in Bergen’s premiere concert hall Grieghallen, and ultimately the material was recorded and became this full length album.

Where our previous joint endeavor «Skuggsjá» had a very specific idea and format when it was commissioned, I feel we had much more room on «Hugsjá», to freely explore as well as to apply our experience into the creative process and planning. It has truly been an enriching process where we have been working alongside great musicians, language experts, archeologists and local experts; seeking to unfold and shed light on relevant, yet near forgotten deities and myths as well as local history and traditions.

We started out by fusing our respective bands into a mammoth of a piece; and marching said mammoth on and off stage afterwards was not the easiest of tasks either. So when we started working on round two, we moved the focus from what we were doing in our “day-bands”, and what we could do together as musical and thinking “individuals”. In that process I feel we have invented a whole new genre and a whole new approach to historically anchored art. The recording process was a lot of fun also; these songs really works on all scales; acoustically outdoors by the sea, mic´d up and amplified in a giant concert hall – and last but not least; as an album…

Roadburn 2018 will be both the release party and international live debut of “Hugsjá”, the album. 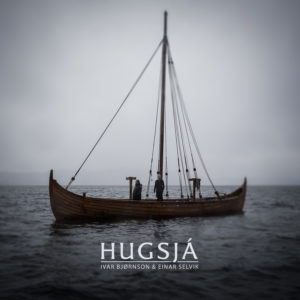 – Featuring members of Enslaved and Wardruna