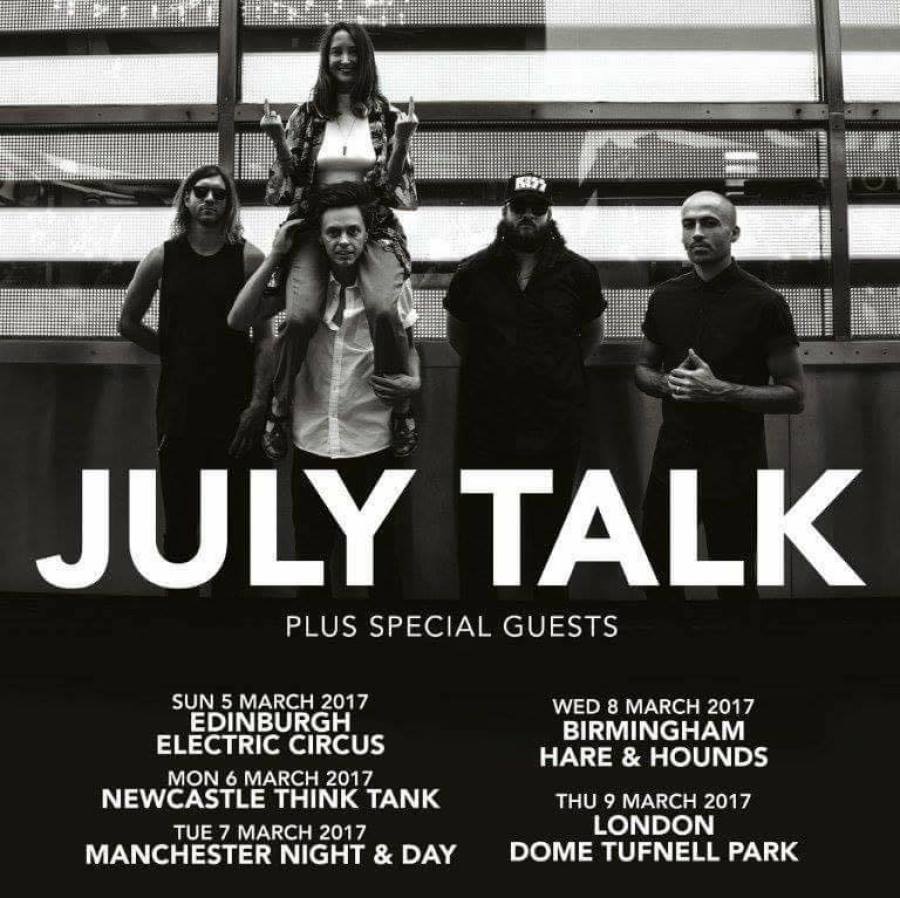 Every so often, you stumble across those bands that completely pull you out of your comfort zone, and make you rethink everything you thought about music. For me – an avid fan of anything sludgy, heavy or punky – alt rock hadn’t really been on my radar for a number of years. It wasn’t until I came across a haunting song called ‘Gentleman’ a few months ago in a pre-made Spotify playlist (don’t judge me) that I was first exposed to Canadian five piece July Talk. But, from that moment, I was hooked. Naturally, when they came to Manchester for an intimate gig at the Night & Day Café, I just had to go and see the live show for myself.

July Talk’s beginnings started in 2010, after singer Peter Dreimanis approached fellow vocalist Leah Fay in a bar in Toronto, after hearing her sing with another band. The two began recording demos together and after recruiting guitarist Ian Docherty, bassist Josh Warburton, and drummer Danny Miles in 2012, July Talk was officially formed. The prospect of a male/female fronted band was intriguing enough to me when I first heard their music, and the various YouTube clips I’d seen prior to the Manchester show had hinted at something really special. The bar was absolutely packed, but I managed to squeeze into a spot just by the side of the stage to get a good view of the band. Frontman Dreimanis explodes onto the stage with a rockstar prescence, while his counterpart Fay is more coy – for now, at least. The crowd goes mad before any member on the stage has even said a word, and without warning the band suddenly launch into a handful of energetic anthems from their most recent album ‘Touch’ and 2014’s self-titled record. Dreimanis’ voice is a raspy powerhouse, not something expected at all from a man of his stature. Fay, on the other hand, offers up a pure and soaring soprano – the two working in surprising harmony together.

Now, it would be very easy to classify July Talk as just some other alternative rock band making waves in the indie scene, but their live performance marks them out as so much more than that. As the band slow things down four songs in with the aforementioned ‘Gentleman’ their stage presence really comes into its own. Much of the July Talk show centres on the electric chemistry the two vocalists have with one another – a kind of ‘will they/won’t they’ scenario, with lots of physical contact, suggestive movements and intense stares (neither Dreimanis nor Fay have confirmed publicly whether they are in a relationship or not). It makes for fascinating, if a little voyeuristic, viewing. But it seems that this is all part of the live July Talk experience. Throughout the set they cover all kinds of topics and emotions in their hour and a half on the stage: anger, liberation, romance and good old fashioned fun. Latest release ‘Picturing Love’ is particularly well received, with a big pop chorus and exceptional vocals from both Dreimanis and Fay. In fact, it is appropriate that I’m sat here writing this review on International Women’s Day, as Leah Fay gives ‘badass rock and roll female’ a whole new meaning. She throws herself about the stage, gets her co-frontman on his knees in front of her (using her microphone as a kind of phallic symbol throughout) and drapes herself over the front of the stage, inches away from her audience. Interestingly, the crowd that gathers around her aren’t the gawping indie boys you would expect – instead, the faces grinning up at Leah Fay are the ones of young women, clearly inspired and reveling in the empowering atmosphere.

The set spans across a variety of musical genres all within July Talk’s very capable hands. Everyone catches a breather during the melancholy bluesy ‘Strange Habit’, before the pace is picked back up again with crowd pleasers ‘Beck + Call’, ‘Lola + Joseph’ and ‘Push + Pull’. The indie-rock musicianship shows why the group were chosen to support Welsh rock heroes Catfish and the Bottlemen on their most recent UK tour – but equally, drummer Danny Miles is just as capable of storming through a filthy punk beat as he is pulling off ambient pop-rock. The passion the band play with is topped off in a pretty memorable way mid-way through the second half, as Peter Dreimanis’ nose starts pouring with blood and dripping onto his trademark white shirt. Still, the grin that is plastered across his face every time a song ends and he comes out of character is plain to see. July Talk are truly ones to watch in an otherwise uninspiring alternative rock scene – a group who aren’t afraid to revel in their own madness. As music yearns for something fresh and interesting, it seems this is only the beginning for this astonishingly unique band.